Snapshot of the California Economy: July 2020

Bottom Line: The California economy appears to have continued to recover in July, but remains significantly depressed compared to pre-pandemic levels.

The COVID-19 pandemic has reshaped the California economy. Over the last several months, the state has experienced abrupt and dramatic swings in economic activity. While a variety of data is available to track developments in the state economy, drawing clear conclusions from these disparate data points can be difficult. To help make sense of this varied data, this post pulls together and synthesizes ten key data points on the state economy. Our goal is to provide a quick, simple snapshot of recent trends in this data. The graphic below provides this snapshot. 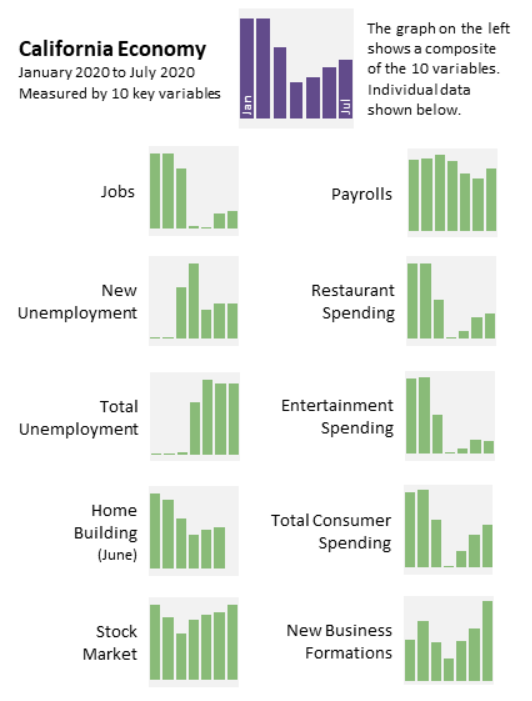 We display each variable as a standardized index that shows how the current level of each variable compares to historic norms. At the top of the graphic, we aggregate the ten variables into a single measure that attempts to capture what changes in the individual variables can tell us about the overall trend in the state’s economy. As this measure shows, California’s economy experienced a precipitous drop in March and April. Beginning in May, however, economic activity began to recover slowly. This recovery has continued through July.

Key areas where the state’s economy has seen some improvement are employment, new business creation, and consumer spending. Since April, the state has added back 750,000 jobs, about a quarter of its pandemic-related job losses. Similarly, after a slowdown in the spring, new business formations were about 25 percent above the historical norm in July. Finally, consumer spending  (as measured by credit and debit card transactions) increased over 20 percent between April and July.