April’s total of 6,083 single family permits was slightly down from March, but the biggest April total since 2007. This is also the first time since 2007 that the state has had two straight months over 6,000 units. Single family activity has rebounded strongly since last spring’s pandemic-driven slump, as prices have risen sharply in most of the state’s metropolitan areas. Permits have been at least 25 percent above the 2015-19 average every month this year. The Inland Empire, Sacramento, and Los Angeles areas had the most permits as usual, but the Oakland and Fresno areas also posted high totals. 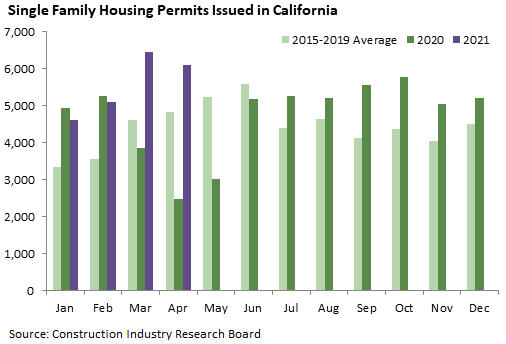 California builders recorded 4,820 multifamily permits in April. This figure is modestly above the pre-pandemic average for the month, as was the case in January and March. Los Angeles County permitted the most units as usual, followed by Santa Clara and Alameda counties. Santa Clara’s total of 765 was more than it recorded in the previous seven months combined. 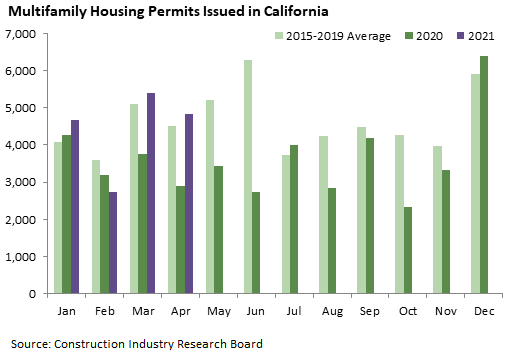 Nonresidential construction permit activity was surprisingly strong in March but dropped sharply in April, and the total of $1.041 billion was the lowest figure for any month since at least 2012. The weakness was across the board as the commercial, industrial, and alterations categories all recorded totals well below their monthly averages even since the start of the pandemic. 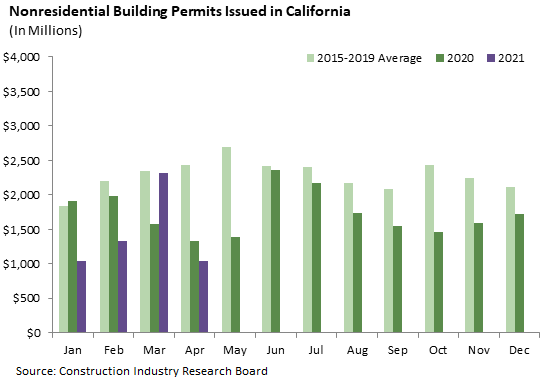