September 2021 data again show torrid growth in home prices in both California and the rest of the country over the past year: the typical home in California has appreciated 21.8 percent since September 2020, well above the national figure of 18.4 percent. California has seen higher 12-month growth rates before: price growth topped out at 25.2 percent in 2004 and 23.7 percent in 2013. In contrast, the nation’s highest previous growth rate since 1996 (the first year in Zillow’s database) was 11.9 percent in 2005. High materials prices, low interest rates that make monthly mortgage payments more affordable (all else equal), low inventory levels, and possibly the pandemic-driven shift to remote work have contributed to the price increases. 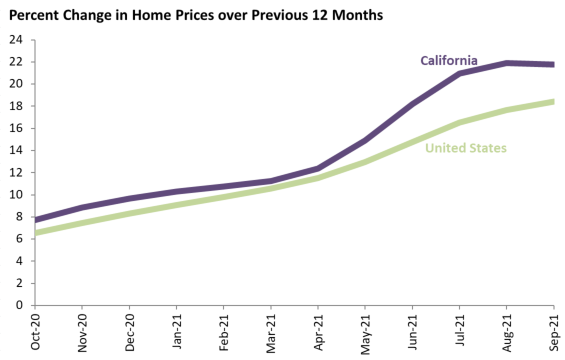 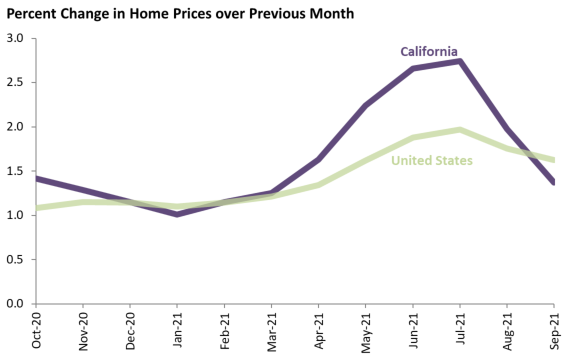 Housing in California has always been relatively expensive, and the gap has widened considerably since 2012. Previous recessions have had disparate effects on home prices: they were largely unaffected by the collapse of the dot-com bubble in 2001, while in the late 2000s the collapse of the housing bubble was the single biggest factor that led to the financial crisis. The affordability gap has widened again since the start of the pandemic. 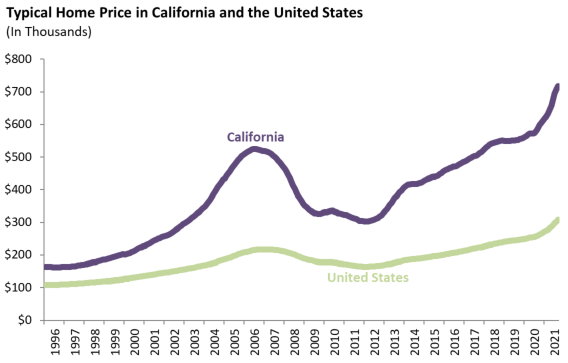 The graph below shows appreciation over the past 12 months for the state’s 15 largest counties, and suggests that the shift to remote work has been a factor in recent price changes. San Francisco has long been northern California’s largest business hub, and historically a large share of its work force has commuted in from other counties. With remote work becoming more common, there is less of a premium on living close to the office and as such home prices in San Francisco have not seen the explosive growth common in the rest of the nation. San Francisco’s average home price is up just 7.3 percent over the past year, and the neighboring and more expensive San Mateo is up 13.5 percent. All the other large counties in the state have seen growth near or above 20 percent, with San Francisco’s relatively affordable neighbors Alameda and Contra Costa seeing higher growth than most. San Joaquin county, which is increasingly becoming a bedroom community for the Bay Area, has seen growth above 30 percent. 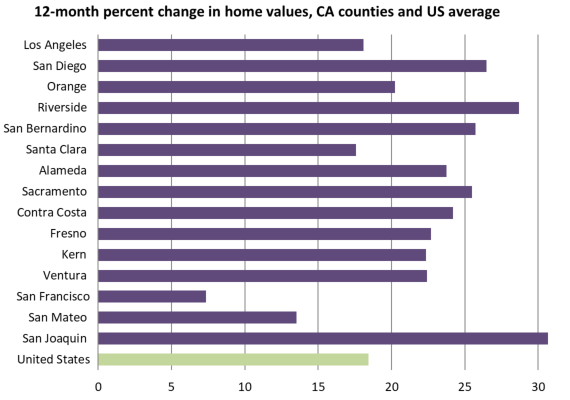