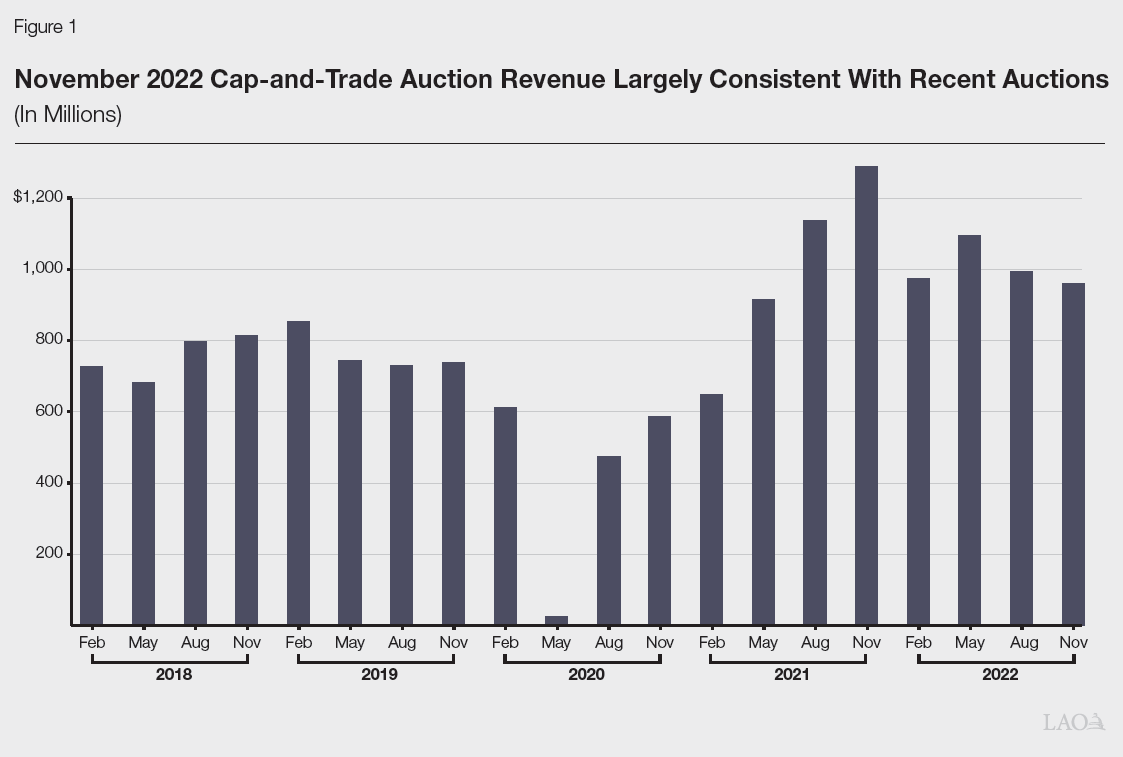 Auction Revenue $250 Million Higher Than 2022-23 Budget Act Assumptions. Auction revenue is deposited in the Greenhouse Gas Reduction Fund (GGRF). The preliminary auction results exceed the amount the 2022-23 budget package assumed would be raised in this auction—$711 million, which reflected the administration’s projections—by about $250 million. This is in line with historic trends in which the administration’s estimates are sizably lower than actual revenues.

Higher Revenue Results in About $100 Million in Additional Discretionary Resources. Under current law, a total of 65 percent of auction revenue is continuously appropriated to the high-speed rail project (25 percent), Affordable Housing and Sustainable Communities Program (20 percent), Transit and Intercity Rail Capital Program (10 percent), low carbon transit operations (5 percent), and safe drinking water program (5 percent, up to $130 million). As a result, of the $250 million in additional revenue, about $150 million will be allocated to these continuously appropriated programs. Depending upon what happens in the next two auctions this fiscal year (scheduled for February and May 2023), the remaining $100 million in additional revenue could be available for additional discretionary spending to be allocated by the Legislature in future budget decisions. Alternatively, should the upcoming auctions generate significantly less revenue than was assumed in this year’s budget package, this “extra” funding could be used to help make up the difference and sustain planned GGRF reserve levels or support for GGRF-funded programs in the current year.

Future Auction Revenue Continues to Be Subject to Substantial Uncertainty. As discussed in our December 2021 Cap-and-Trade Auction Update and GGRF Projections post, general uncertainty about auction revenue continues. The decline in allowance prices in the November 2022 auction may reflect downward economic pressures and the significant number of unused allowances purchased in earlier years but not yet used.