Sales Tax Rate Has More Than Doubled Since 1962. When California introduced its sales tax in 1933, the rate was 2.5 percent. By 1962, the rate had risen to 4 percent. As shown in the figure below, the average rate continued to rise in the subsequent decades, reaching 7.9 percent in the early 1990s. Since then, the sales tax rate has remained relatively flat, although a temporary increase pushed the rate above 9 percent from 2009 through 2011. More recently, Proposition 30 of 2012 increased the rate by a quarter-cent from 2013 through 2016. 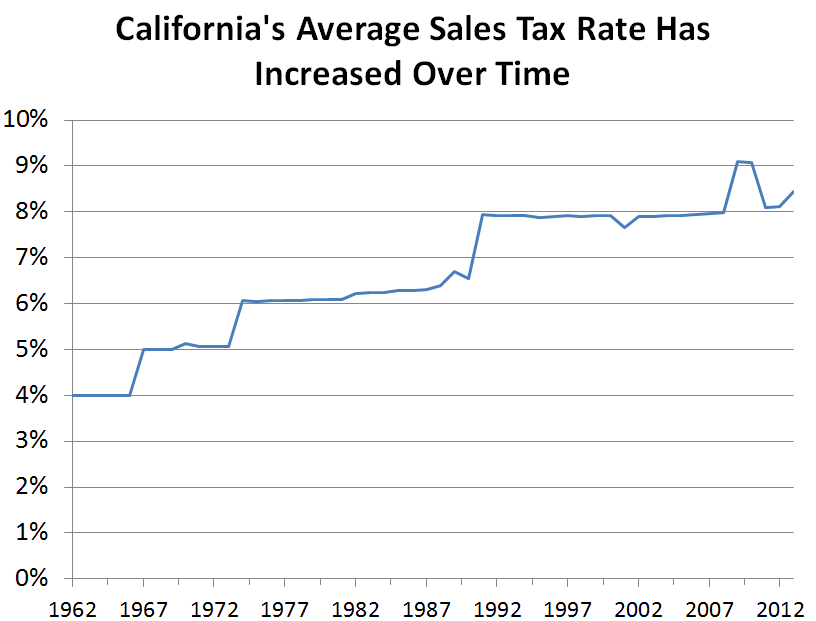 Rate Varies Across Cities and Counties. As described in our report, Understanding California’s Sales Tax, different cities and counties have different sales tax rates. These rates range from 7.5 percent to 10 percent, with a statewide average around 8.5 percent.

Different Ways To Calculate Sales Tax Rate. In 1969, the Legislature passed the Transactions and Use Tax (TUT) Law, allowing local governments to levy optional local sales taxes. As a result of this law, sales tax rates vary across cities and counties as described above. Consequently, any calculation of a single sales tax rate for California must assign a weight to the rate in each area. There are at least two reasonable ways to calculate these weights, with each approach producing slightly different results. The rates in the figure above are “sales-weighted,” which places greater weight on areas with higher volumes of taxable sales. This approach is useful for looking at changes in California’s sales tax rate over time.