The major features of the 2016–17 budget plan are summarized below.

In constructing the budget, the Legislature was faced with decisions over how to allocate over $6 billion in discretionary resources. (“Discretionary” in this context excludes billions of dollars controlled by constitutional funding requirements, such as Proposition 98 and Proposition 2, and added costs to maintain existing policies.) This allocation includes proposals made by the Governor in January and May, which were later approved by the Legislature, as well as legislative choices made in putting together the final budget package. Figures 5 and 6 show how the June 2016 budget package allocated over $6 billion in discretionary General Fund resources, prioritizing reserves and temporary spending. 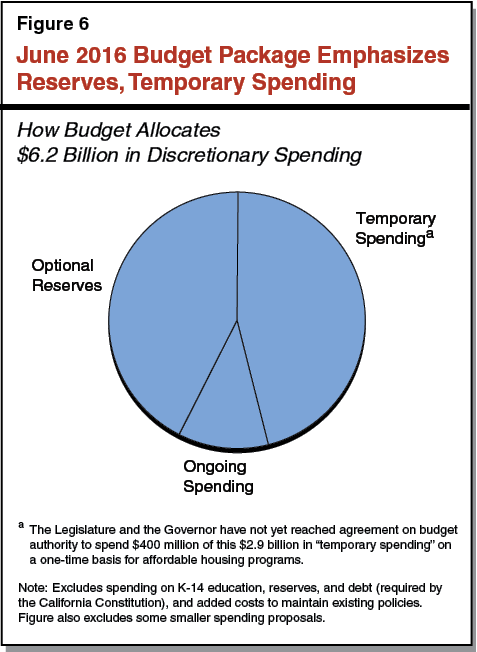 Allocated $2.6 Billion to Increasing Reserve Funds. In addition to the required reserves under Proposition 2, the budget makes an additional deposit of $2 billion into the BSA, the state’s constitutional rainy day fund. The June 2016 budget package also grows budget reserves in the state’s discretionary reserve fund, the SFEU, by an additional $0.6 billion. Together, the June budget package allocates $2.6 billion in discretionary General Fund resources toward reserves.

Sets Aside $1.8 Billion for One–Time Infrastructure Spending. The budget sets aside $1.3 billion over two years ($1 billion in 2016–17 and $0.3 billion in 2017–18) for a new State Project Infrastructure Fund. These funds will be continuously appropriated for the replacement and renovation of various state office buildings. The budget package also includes $485 million in non–Proposition 98 General Fund resources to fund various statewide deferred maintenance projects on a one–time basis.

Repeals the Maximum Family Grant (MFG) Policy. The budget includes legislation repealing the MFG policy, which specified that a family enrolled in California Work Opportunity and Responsibility to Kids (CalWORKs) does not receive a higher grant to reflect the birth of a child born after ten continuous months of assistance. The expected General Fund cost of the repeal of the MFG policy in 2016–17 is $97 million. These General Fund costs are anticipated to increase in 2017–18, but to eventually decline to zero as growth in certain county realignment funds are used to pay these costs.

Increases Funding for Affordable Housing Programs. The budget provides one–time funding of $45 million for temporary housing assistance for homeless individuals. While the June 2016 budget passage set aside $400 million for affordable housing programs, this funding was contingent on changes to state law to streamline local approval processes of certain multifamily housing projects that contain affordable housing units. Because these changes to state law were not adopted by the end of the 2015–16 legislative session, there is currently no budgetary authority to spend this $400 million. Without additional legislative action, this $400 million essentially will remain in the state’s discretionary budget reserve, the SFEU.

Increase in University Funding. The budget provides $299 million in new ongoing state General Fund support for the University of California (UC) and the California State University (CSU) combined. Of this amount, $144 million is for UC and $155 million is for CSU. The additional funding is primarily for general purpose base increases and resident enrollment growth.

Provides Public Safety Funding. The budget provides funding for various public safety programs on a one–time basis. This includes: $20 million for city law enforcement grants; $15 million for a Law Enforcement Assisted Diversion program; $10.2 million for Uninhabitable Police Station grants; and $10 million for mental health treatment, substance abuse treatment, and diversion programs otherwise funded through Proposition 47. The budget package also includes some other one–time and ongoing spending for trial court security, counter–violence and gang activity prevention, and services for ex–offenders. (As discussed below, the budget package authorizes $270 million in lease revenue bonds for replacing and renovating county jails, a change from the Governor’s request to allocate funds for this purpose from the General Fund.)

The budget package includes spending allocations driven by constitutional funding requirements, such as Proposition 98 and Proposition 2. The major features of these mandatory items are discussed below.

Increase in Proposition 98 Funding. Due primarily to increases in state General Fund revenue, the budget package revises estimates of the Proposition 98 minimum guarantees for 2014–15 and 2015–16 upward by a combined $1.5 billion. The 2016–17 minimum guarantee is $2.8 billion (4.1 percent) higher than the revised 2015–16 level. The bulk of new ongoing and one–time Proposition 98 spending is distributed on a per–student basis for locally determined priorities. The package includes some new spending for specified state priorities, including the creation of a new ongoing community college workforce program and a new one–time college readiness initiative.

Mandatory Reserve Deposits Under Proposition 2. Proposition 2 requires the state to make minimum annual deposits into the BSA, the state’s rainy day fund. The budget includes a total Proposition 2 reserve requirement in 2016–17 of $1.3 billion. Including optional reserves, as shown in Figure 4, the budget assumes 2016–17 will end with $8.5 billion in reserves.

Mandatory Debt Payments Under Proposition 2. In addition to a required BSA deposit, Proposition 2 requires the state to make minimum annual payments toward certain eligible state debts. The total amount of these required debt payments in 2016–17 is $1.3 billion. Figure 7 shows how the 2016–17 budget package allocated these debt payments. Most were directed toward repaying special fund loans to the General Fund.