The 2016–17 budget provides $12.6 billion from the General Fund for judicial and criminal justice programs, including support for ongoing programs and capital outlay projects, as shown in Figure 34. This is an increase of $518 million, or 4 percent, above the revised 2015–16 General Fund spending level.

The above augmentations are partially offset by a $34 million reduction in General Fund support for trial court operations in 2016–17 in order to reflect the availability of property tax revenue in accordance with Control Section 15.45 and Section 2578 of the Education Code. Such funds are remitted to the state by counties that collect more property tax than state law allows them to spend on education.

Improvement and Modernization Fund (IMF). In recent years, the judicial branch’s IMF experienced persistent operational shortfalls that steadily depleted the fund balance. (The IMF is a judicial branch special fund that supports various projects and programs that broadly benefit the trial courts, such as information technology [IT] projects.) To address this issue, the budget includes a couple of actions to shift costs from the IMF to the General Fund. For example, the IMF currently provides $7 million annually to support the California Case Management System Version 3 (CCMS V3) in four courts. (The CCMS V3 is a civil, small claims, probate, and mental health case management system.) The budget provides funds to replace this system (at a cost of $25 million over three years). This will eventually eliminate the need for the $7 million expenditure from the IMF.

Capital Outlay. The budget provides $392 million for various court construction projects. This amount consists of (1) $303 million in lease revenue bond authority for the construction or renovation of five previously approved projects (Willows, El Centro, Indio, Redding, and Sonora), (2) $85 million from the Immediate and Critical Needs Account (ICNA) for design and construction activities for ten projects, and (3) $4 million from ICNA for the modification of two existing court facilities in Los Angeles. (ICNA receives revenue from certain court fee and fine increases.)

The budget act provides $10.5 billion from the General Fund for support of the California Department of Corrections and Rehabilitation. This is a net increase of $308 million, or 3 percent, above the revised 2015–16 level of spending. This increase primarily reflects additional costs related to (1) inmate medical care, (2) the expansion of inmate rehabilitation and alternative custody programs, and (3) debt service on lease revenue bonds. These increases are partially offset by savings primarily related to (1) the conversion of segregated housing units to general population housing units, (2) reduced funding for the basic correctional officer academy, and (3) the use of fewer out–of–state contract beds for inmates. 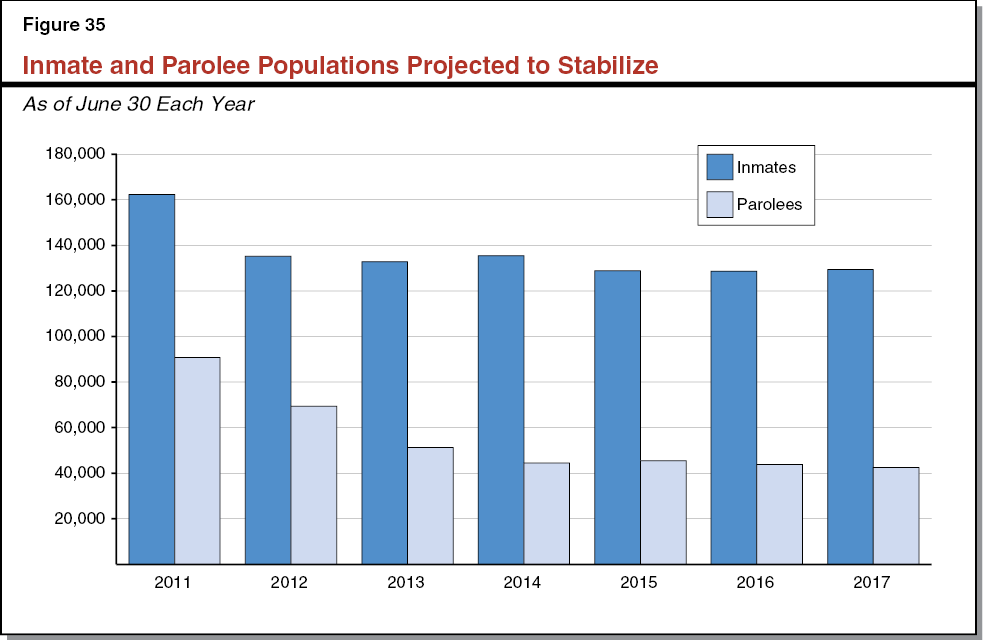 Inmate Medical Care. The budget includes $2 billion from the General Fund for inmate medical care to comply with the federal court in the Plata v. Brown case, an increase of $54 million, or 3 percent, above the revised 2015–16 level of spending. This includes (1) $36 million for modifications to the Electronic Health Record System, which will serve as the primary health record for all inmates; (2) $12 million to implement a uniform medical supervisory staffing model at all state prisons; and (3) $7 million to augment janitorial services at the California Health Care Facility in Stockton. This increase was somewhat offset by reductions in spending elsewhere, such as on inmate pharmaceuticals.

Alternative Housing Programs. The budget includes $35 million from the General Fund to expand alternative housing for inmates. This includes $32 million for the Male Community Reentry Program, which provides beds in community facilities that prepare inmates for transition out of prison. The remaining $3 million is to expand the Alternative Custody Program to comply with a court order requiring that the program serve male inmates.

In addition, the budget provides 24 positions and about $9 million on a limited–term basis from special funds to support various DOJ activities. This includes 20 positions and $3 million annually over three years from the Gambling Control Fund to address the current cardroom licensing backlog. Most of the remaining funds would come from the Firearms Safety and Enforcement Special Fund to support contracts with local law enforcement agencies who remove firearms from prohibited persons with mental illness and with domestic violence restraining orders.

In addition to funding provided in the budget, the Legislature approved legislation in August—Chapter 281 of 2016 (SB 1187, Lara)—to provide $37 million from the General Fund to DOJ for the payment of a legal settlement to the Pauma Band of Luiseno Mission Indians of the Pauma and Yuima Reservation. This settlement is in regards to payments that the tribe had previously made to the state for operating gaming devices in the state.

Board of State and Community Corrections (BSCC). The budget includes $223 million ($137 million from the General Fund and $85 million from other funds) for BSCC, which is responsible for administering various public safety grants, overseeing local correctional standards, providing technical assistance to local criminal justice agencies, and collecting data. The budget includes $61 million in one–time General Fund increases for local law enforcement grants. This consists of (1) $20 million to cities to improve relations between police and high–risk populations (such as homeless individuals), (2) $15 million for a pilot program that seeks to divert low–level prostitution and drug offenders into rehabilitation services in lieu of jail and prosecution, (3) $10 million for police station infrastructure in Fresno County, (4) $10 million for regional crime task forces, and (5) $5.5 million for the City of Salinas for violence and gang prevention efforts.

The budget also provides an additional $270 million in lease revenue bonds for adult local criminal justice facilities (such as jails) to be administered by BSCC. Of this amount, $250 million will be allocated through a competitive grant process, with projects that include mental health or rehabilitation program space receiving greater priority. The remaining $20 million will be allocated to Napa County to repair damages its jail sustained in the 2014 earthquake.

Proposition 47. Proposition 47 reduced the penalties for certain crimes and requires that the resulting state savings, as estimated by DOF, be spent on designated programs. Specifically, the measure requires the savings be continuously appropriated as follows: (1) 65 percent for recidivism reduction programs, (2) 25 percent for school truancy and dropout prevention, and (3) 10 percent for victim services. The administration currently estimates that $39 million in state savings will be available for expenditure in 2016–17. Separate from the amount that will be appropriated under Proposition 47, the budget includes one–time funding from the General Fund of (1) $18 million for school truancy and dropout prevention and (2) $10 million for recidivism reduction programs.

Victim’s Compensation and Government Claims Board (VCGCB). In adopting the 2016–17 budget package, the Legislature adopted legislation to shift most of VCGCB’s responsibilities unrelated to victims—such as the Government Claims Program—to other state agencies, including the Department of General Services. Under the legislation, VCGCB will be renamed the Victim Compensation Board and will continue to have responsibility for some non–victim programs (such as compensation of individuals wrongly convicted of crimes and the Good Samaritan Program).