Analysis of the Human Services Budget

The Supplemental Security Income and State Supplementary Payment (SSI/SSP) program provides cash grants to low-income aged, blind, and disabled individuals. The state’s General Fund provides the SSP portion of the grant while federal funds pay for the SSI portion of the grant. For 2017‑18, the budget proposes nearly $3 billion from the General Fund for the state’s share of SSI/SSP—an increase of $55 million (1.9 percent) over estimated 2016‑17 expenditures. This increase would bring total program funding to $10.2 billion ($2.9 billion from the General Fund and $7.3 billion federal funds) in 2017‑18. The primary driver of this increase is the full-year cost of a cost-of-living adjustment (COLA) to the SSP portion of the grant in January 2017.

During Constrained Budget Environment, SSP Grants for Individuals and Couples Reduced to Federally Required Minimum. The state is required to maintain SSP monthly grant levels at or above the levels in place in March 1983 in order to receive federal Medicaid funding ($156.40 for SSP individual grants and $396.20 for SSP couple grants). During the most recent recession, the state incrementally decreased SSP grants for individuals and couples until they reached these minimum levels in June 2011 and November 2009, respectively. Beginning January 1, 2017, SSP grants for individuals and couples increased above the minimum level due to the COLA on the state’s SSP portion.

Total Grants Have Been Gradually Increasing Largely Due to Federal COLAs, but Remain Below Federal Poverty Level. As shown in Figure 1, the total SSI/SSP monthly grant amount for individuals (the bulk of the SSI/SSP caseload) has been increasing gradually since 2010‑11—predominantly due to the provision of federal COLAs. However, despite the gradual increases in the grants shown in the figure, current maximum SSI/SSP grant levels for individuals remain below the federal poverty level. We note that during some difficult budget times prior to 2010‑11, the state negated the impact of federal COLAs by reducing the SSP portion of the grant by the amount of the federal increase, thereby holding total SSI/SSP grant levels flat. After the state reduced SSP grants to the federally required minimum levels, the state could no longer do this. 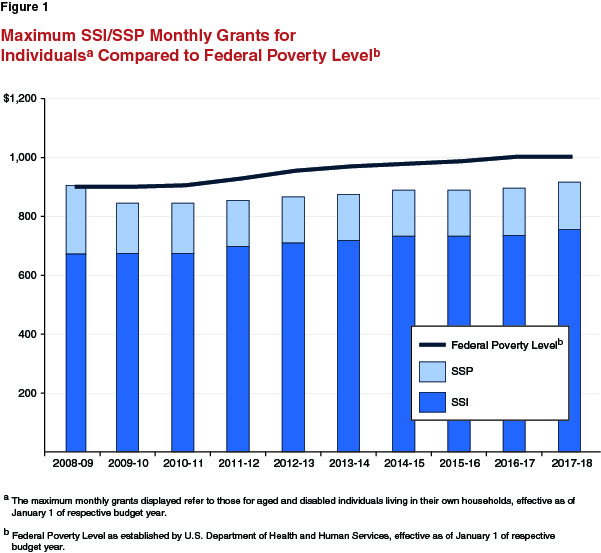 Full-Year Cost of January 2017 SSP COLA. The budget includes $73 million from the General Fund for a full year of funding for the COLA increase to the state’s SSP portion of the grant, which became effective January 1, 2017. In addition, the budget estimates that the federal government will provide a 2.6 percent COLA to the SSI portion of the grant, beginning January 1, 2018. As shown in Figure 2, the administration estimates that total monthly maximum grants for individuals will increase by about $20 and grants for couples will increase by about $29 in 2018 as a result of the federal COLA.

Total Grant Increases May Be Slightly Less Than Estimated by Governor. The Governor’s budget estimates that the CPI-W that the federal government will use to adjust the SSI portion of the grant in 2018 will be 2.6 percent, but our estimate of the CPI-W is slightly lower, at 2.1 percent. (The actual CPI-W will not be known until the fall.) As a result, we estimate that total maximum monthly SSI/SSP grants would increase by $15.44 for individuals and $23.16 for couples under the Governor’s proposal.

Eliminates Funding for County Housing and Disability Income Advocacy Program. As we discussed in The 2017‑18 Budget: Overview of the Governor’s Budget, the Governor’s budget estimates a $1.6 billion budget problem by the end of 2017‑18. Among actions proposed to address this problem, the administration proposes to defer or eliminate various one-time spending commitments made in the 2016‑17 enacted budget. Included is a proposal to eliminate $45 million in one-time funding in 2016‑17 to assist counties in establishing or expanding programs that help homeless individuals with disabilities apply for various assistance programs, including SSI/SSP.