Medi-Cal, the state’s Medicaid program, provides health care coverage to over 13 million of the state’s low-income residents. Medi-Cal costs are generally shared between the federal and state governments. In this web post, we describe the major factors that we project will drive changes in General Fund spending in Medi-Cal over the near term—in 2018-19 and 2019-20—and over the longer term, through 2022-23. We also describe a number of key assumptions that we made in our spending projections.

We estimate $22.6 billion in General Fund spending on Medi-Cal in 2018-19, a roughly $400 million reduction relative to what was assumed in the 2018-19 Budget Act. As we describe further below, this adjustment reflects a reduced amount of funding we estimate the state will have to repay to the federal government for potentially disallowed claims. From this revised 2018-19 amount, we project that General Fund spending in Medi-Cal in 2019-20 will increase by almost $1.4 billion (6.1 percent), to a total of $23.9 billion. This reflects the net effect of several different offsetting factors that are displayed in Figure 1 and that we describe in greater detail below. 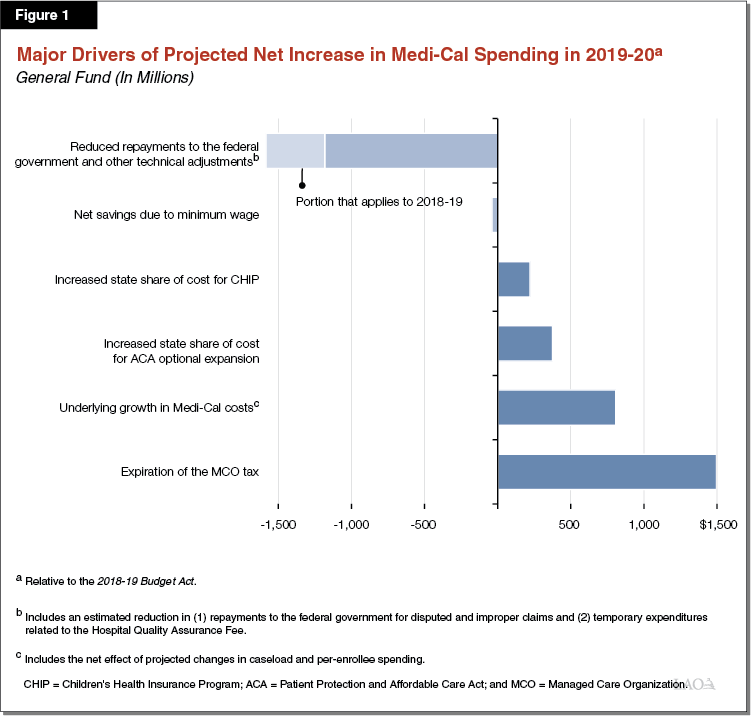 Number of Individuals Enrolled in Medi-Cal Projected to Decline in 2018-19 and 2019-20 . . . We estimate that the Medi-Cal caseload will decline modestly by 1.6 percent in 2018-19 (to 13.1 million) and further decline slightly by 0.5 percent in 2019-20 (to 13 million) in 2019-20. Our projection assumes continued strong economic conditions going into 2019-20. As such, we expect that increased wages will lead to fewer people qualifying for and remaining enrolled in Medi-Cal.

. . . While Spending Per Person Projected to Continue to Rise. Per-enrollee costs in Medi-Cal are driven by growth in service utilization, changes in the kinds and cost of services that enrollees utilize, and the prices paid by the Medi-Cal program. Based on recent trends, we project that per-enrollee costs will grow by about 3 percent annually from 2017-18 through 2019-20.

On Net, Underlying Costs Expected to Increase. Projected growth in per-enrollee costs are more significant than the projected caseload decline, such that savings from a declining caseload are more than offset by higher per-person costs. Overall, we estimate that underlying changes in caseload and spending per person will increase General Fund spending in Medi-Cal in 2019-20 by roughly $800 million.

Current MCO Tax. Since 2016-17, the state has imposed a per-member tax on Medi-Cal and non-Medi-Cal MCOs. Revenues from the MCO tax, which leverages federal funding for Medi-Cal, provide a substantial General Fund offset in Medi-Cal. In 2018-19, revenues from the MCO tax will offset almost $1.9 billion in General Fund expenditures. Under state law, the MCO tax expires at the end of 2018-19. (In its statutory authorization, the MCO tax was tied to a 7 percent service-hour restoration in In-Home Supportive Services (IHSS), at a General Fund cost of roughly $300 million in 2017-18. For more information on the IHSS implications of the MCO tax, please see our IHSS supplemental online post.)

State Budget Implications. Two major uncertainties surround the continuation of the MCO tax. First, would the Legislature approve a continuation of the MCO tax beyond 2018-19 in its current form? Second, would the federal government provide its required approval of a similarly structured MCO tax if it were approved by the Legislature? In light of these uncertainties, we assume the MCO tax will expire at the close of 2018-19, eliminating the General Fund offset and increasing General Fund spending in Medi-Cal by $1.5 billion in 2019-20. The impact is smaller in 2019-20 than in subsequent years due to a lag in when a portion of remaining MCO tax revenues are expected to be used to offset the General Fund. However, if the Legislature were to reauthorize—and the federal government were to reapprove—the existing MCO tax, annual General Fund spending in Medi-Cal would be $1.5 billion lower than we project in 2019-20. (We also assume that some of the increased General Fund spending due to the expiration of the MCO tax would be offset by savings triggered by the elimination of the 7 percent service-hour restoration in IHSS.)

Reduced Spending Related to Repayments to the Federal Government

Recent Budget Act Assumes Significant Repayments of Federal Funds in 2018-19. The 2018-19 Budget Act reflects over $1.4 billion in General Fund spending in Medi-Cal in 2018-19 related to various repayments to the federal government, including (1) about $780 million to repay previously claimed federal funds that the federal government now disputes, (2) $480 million to repay federal Children’s Health Insurance Program (CHIP) funding that the state improperly claimed, and (3) about $180 million to repay federal funds for behavioral health services previously claimed by counties that were disallowed following a federal audit.

2017-18 Agreement. Proposition 56 (2016) raised state taxes on tobacco products and dedicated a significant portion of its revenues to Medi-Cal beginning in 2017-18. Pursuant to a two-year agreement reached as a part of the 2017-18 budget package, a portion of annual Proposition 56 revenues will be used to fund Medi-Cal provider payment increases, with any remaining Proposition 56 funds dedicated to Medi-Cal supporting underlying cost growth in the program (thus offsetting General Fund costs). In 2018-19, around $800 million in Proposition 56 revenues will fund provider payment increases and around $220 million will offset General Fund spending in Medi-Cal.

In 2014, California expanded Medi-Cal eligibility to childless adults with incomes up to 138 percent of the federal poverty level under the Patient Protection and Affordable Care Act (ACA). This population is known as the ACA optional expansion population. Through 2016, the federal government paid 100 percent of the Medi-Cal costs for this population. Under federal law, the federal share is scheduled to gradually decline through 2020, with the state share growing and eventually reaching 10 percent of the cost of Medi-Cal services for the ACA optional expansion population. From 2018-19 to 2019-20, the effective state share of cost for this population will increase from 6.5 percent to 8.5 percent. As a result, we project that General Fund spending on the ACA optional expansion population will increase by nearly $400 million between 2018-19 and 2019-20.

California’s CHIP Program. CHIP is a joint federal-state program that provides health insurance coverage to children in low-income families, but with incomes too high to qualify for Medicaid. In California, CHIP is operated under Medi-Cal. The state and federal governments share the cost of CHIP. In California, the federal government has historically provided a federal cost share of 65 percent (with the state providing the remaining 35 percent).

In 2016, voters passed Proposition 55, which extended tax rate increases on high-income Californians. Proposition 55 includes a budget formula—first taking effect in 2018-19—that in some years could direct a portion of the revenues from the extended tax increases to increase funding in Medi-Cal. The Director of Finance is given significant discretion in making calculations under this formula. Under the approach used by the Director of Finance for the 2018-19 budget, no additional funding was allocated to Medi-Cal. The amount of future funding that might be allocated to Medi-Cal through Proposition 55 is uncertain, but could be as much as $2 billion in any given year. Our outlook, does not assume any additional Medi-Cal spending in any year as a result of the Proposition 55 Medi-Cal formula. If the Director of Finance estimates that Medi-Cal should receive increased funding under Proposition 55 and depending on decisions by the Legislature, actual spending in Medi-Cal could be significantly higher than we project.

Over the longer term through 2022-23, our outlook presents two scenarios. The first scenario reflects continued economic growth. The second scenario reflects the estimated effects of a moderate recession during 2020-21. Figure 2 summarizes our Medi-Cal spending projections for our growth and recession scenarios over the outlook window, under which Medi-Cal General Fund spending is projected to reach $27.5 billion (5.1 percent average annual growth) and $28 billion (5.6 percent average annual growth), respectively, by 2022-23. 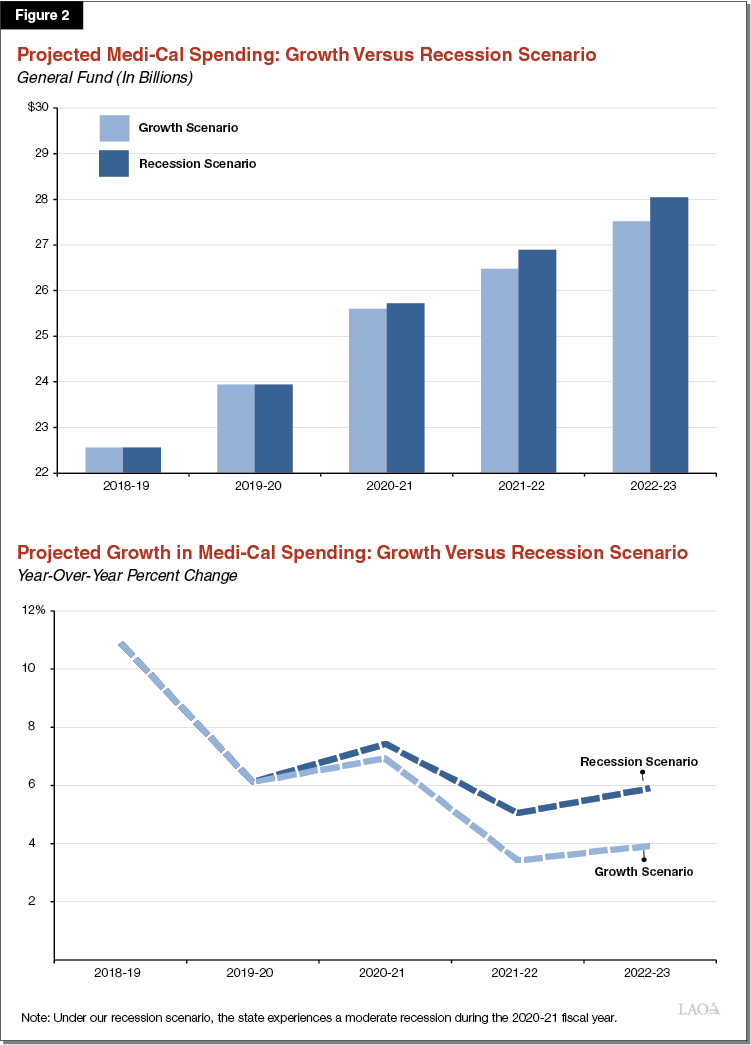 In the economic growth scenario, we estimate that General Fund spending in Medi-Cal would grow at an average rate of 5.1 percent from 2018-19 through 2022-23, eventually reaching $27.5 billion in 2022-23. Over this period, we project that the Medi-Cal caseload would be essentially flat. Major assumptions of our longer-term outlook under the economic growth scenario are described below.

ACA Optional Expansion and CHIP Sharing Ratios to Stabilize by 2021-22. The state share of cost for the ACA optional expansion and CHIP is scheduled to continue to increase beyond 2019-20 before stabilizing in subsequent years. By 2021-22, this will increase state General Fund costs in Medi-Cal by a projected $1.2 billion relative to 2018-19 spending, with about half of this increase in General Fund costs occurring in the two years after 2019-20. There will be no additional state costs in 2022-23 due to changes under federal law in the state share of cost. As a result, growth in year-over-year spending is projected to be slower in the final years of our outlook than the elevated growth in the earlier years.

MCO Tax. We project that the expiration of the MCO tax will increase General Fund spending in Medi-Cal to almost $1.9 billion annually by 2020-21. This General Fund impact is almost $400 million higher than the $1.5 billion impact projected for 2019-20. The higher impact in 2020-21, relative to 2019-20, is due to our assumption that some MCO tax revenues will continue to be used to offset General Fund spending in 2019-20 despite the expiration of the tax at the end of 2018-19.

Scheduled Minimum Wage Increases Projected to Gradually Reduce Caseloads and Costs. Pursuant to Chapter 4 of 2016 (SB 3, Leno), the state’s minimum wage is scheduled to gradually increase on an annual basis to $15 per hour in 2023. We estimate that the higher minimum wage will result in net savings in Medi-Cal of around $300 million by 2022-23. These net savings are primarily due to the rising minimum wage raising some enrollees’ incomes so that they are no longer eligible for the program. (Many of these individuals would likely become eligible for federal subsidies to purchase commercial health insurance through the state’s Health Benefit Exchange, Covered California.)

In the recession scenario, we estimate the potential impact of a moderate downturn during 2020-21. For more information on the specific features of the growth and recession scenarios, see our main fiscal outlook publication, The 2019-20 Budget: California’s Fiscal Outlook. Under this scenario, we estimate that increased unemployment and reduced wages would lead to a greater number of people eligible to enroll in Medi-Cal. Because of increased caseloads, we estimate that Medi-Cal spending would grow at a faster average rate of 5.6 percent over the outlook period and exceed projected annual General Fund spending under the economic growth scenario by more than $500 million by 2022-23—reaching $28 billion at that time. The magnitude by which Medi-Cal caseload would change in response to a moderate recession is uncertain. More or less significant recessions would result in greater or lesser impacts to the Medi-Cal caseload and state costs in the program.

Suspension of Minimum Wage Increase Would Likely Increase Medi-Cal Costs. Senate Bill 3 authorizes the Governor to temporarily suspend the scheduled annual increase in the minimum wage in the event of a poorly performing economy that negatively impacts the General Fund condition. Consistent with what we have assumed throughout the Fiscal Outlook, we do not assume a suspension of scheduled minimum wage increases under our recession scenario. However, if the Governor were to suspend for one year the minimum wage increase scheduled to take place on January 1, 2021—delaying the increase from $13 to $14 to January 1, 2022—we project higher annual costs in Medi-Cal ranging from $50 million to $100 million between 2020-21 and 2022-23.