How California Governments Respond
to Disasters

Government agencies are responsible for reacting quickly to disasters to help limit damage to people and their property. This includes assessing the disaster situation and bringing in the necessary resources to respond in a coordinated way. This post describes the state system used to facilitate a coordinated response to disasters. It also describes various types of disaster declarations that state and local governments make in order to receive financial assistance for response and recovery costs.

When natural or manmade disasters strike, government agencies are responsible for reacting quickly to help limit damage to people and their property. In order to facilitate this, the state uses a system of disaster response known as the Standardized Emergency Management System, which we describe below.

Takes Bottoms-Up Approach, Starting Locally. The state’s system of disaster response typically starts at the local level. Members of the public frequently alert a local government about a disaster incident—such as a fire or flood—through calls to the 9‑1‑1 system. Upon receiving such an alert, local first responders—such as police or fire departments—respond to the incident. Many smaller disaster incidents—such as small fires or incidents of civil unrest—are handled solely at the local level by these first responders.

Provides Additional Resources Through Mutual Aid System. When disaster incidents are large enough that they overwhelm a local government’s capacity to respond, the local government can request additional resources—such as emergency responders or equipment—from other governmental entities through the state’s mutual aid system. The state’s mutual aid system is voluntary and allows communities that have depleted all of their local resources to access assistance from other communities. In turn, these communities are expected to reciprocate and to provide assistance, when requested and reasonably available, to others as well. 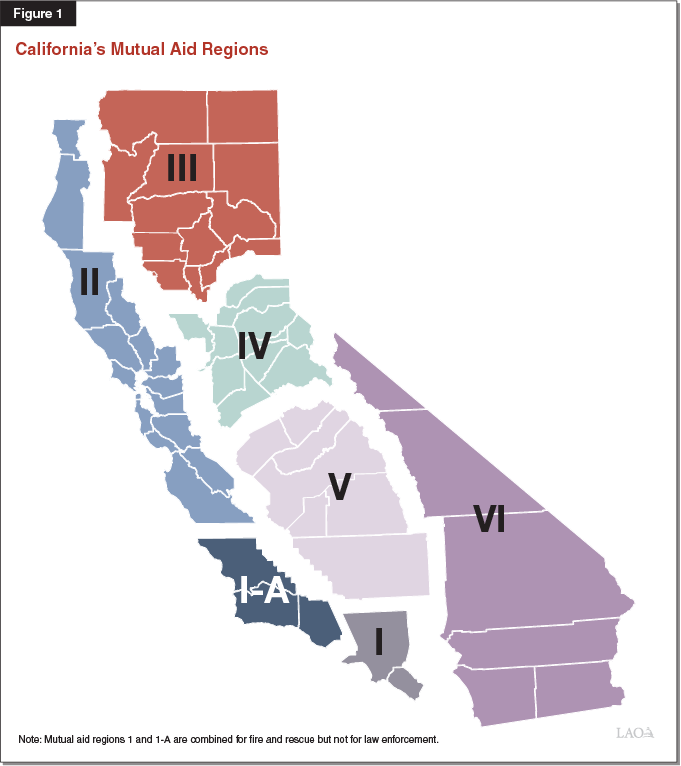 If the resources within a mutual aid region are insufficient because the disaster has grown very large, regional mutual aid coordinators work with state-level staff to request additional resources from other areas, including local governments in other parts of the state, various state agencies, other states, the federal government, or other countries. There are various agreements that govern the provision of mutual aid by these entities, such as the Master Mutual Aid Agreement (which governs intrastate mutual aid) and the Emergency Management Assistance Compact (which governs interstate mutual aid). These agreements often define when mutual aid is provided and the conditions under which it is reimbursed. In some cases, state or federal funds reimburse entities providing mutual aid, such as when state or federal governments make certain disaster declarations.

Uses Standardized Approach to Designating Responsibilities. The state’s emergency response system uses a standard organizational structure. This structure designates the command structure for the emergency response personnel in the field. The system also designates standard organizational approaches to incident support activities, such as for management, operations, planning, logistics, and finance. This standard organizational structure is particularly important because often multiple entities are involved in responding to a disaster incident, either through the mutual aid system or because the disaster incident crosses jurisdictional boundaries. It is easier for multiple entities to collaborate when they all use the same structure and are familiar with the same basic roles.

Depending on the severity of a disaster, local, state, and federal agencies can issue different types of emergency declarations. As described further below, these declarations are important because they are often prerequisites for certain types of disaster assistance provided by the state and federal governments. Additionally, these declarations provide agencies with authority to take certain emergency actions during disasters, such as commandeering resources needed for disaster response and temporarily suspending some statutes and regulations.

When a natural or manmade disaster occurs, the governing body of the affected local government—such as a city council—can declare a local emergency if it determines conditions are or are expected to be beyond its capacity to respond and recover. In some cases, a local proclamation is the only type of disaster declaration made. In other cases, it is the first step towards receiving state and federal disaster declarations, which the local government needs in order to request many types of state or federal financial assistance. (It is not required, however, for local governments to access the mutual aid system.) The local emergency proclamation also provides the local government with additional authority—such as for imposing curfews or exercising special expedited contracting authority—to ensure that it can take the steps needed to protect the community.

Emergency Services Director’s Concurrence. At the request of a local government, the Director of the state’s Office of Emergency Services may, at his or her discretion, concur with a local agency’s declaration of a local emergency. This concurrence makes state financial assistance, through the California Disaster Assistance Act (CDAA), available to the local agency to offset emergency response costs and repair and replace damaged public facilities. (We discuss CDAA and other state and federal disaster assistance programs in the Main Types of Disaster Recovery Assistance post.)

Governor’s Declaration of State of Emergency. The Governor can proclaim a State of Emergency when the resources of a local jurisdiction have been exceeded, such as when a large flood occurs. Similar to the Director’s Concurrence, this declaration makes financial assistance available to repair and replace damaged public facilities. However, this declaration also provides the Governor with additional authority under the California Emergency Services Act—such as to exercise police powers and to direct state agencies to use personnel and equipment to respond or recover from the disaster. Additionally, a State of Emergency is required for many types of federal assistance. For instance, it is a prerequisite for the state to request that the President make a Major Disaster or Emergency Declaration, which provides opportunities for the state to seek financial assistance from the federal government.

Fire Management Assistance Grant (FMAG) Declaration. At the request of the Governor, the Federal Emergency Management Agency (FEMA) can provide an FMAG declaration when the state is experiencing an uncontrolled wildfire that may become a major disaster if additional firefighting resources are not provided. In making the decision to issue an FMAG declaration, FEMA considers factors such as the threat to lives and property and the availability of state and local resources. In doing so, FEMA considers whether the estimated/projected response costs exceed at least one of two thresholds—one for individual fires and one for multiple fires within a calendar year—based on the state’s population. For example, generally, California could qualify for an FMAG in 2017 if eligible response costs for an individual wildfire totaled at least $2.7 million, or if eligible costs for multiple wildfires cumulatively totaled $8 million. The FMAG declaration provides additional federal funding to help the state fight the fire. This funding can be used for firefighting supplies, equipment, and overtime costs, as well as for other activities such as evacuating residents. Because of the time sensitive nature of these requests for additional firefighting resources, the process of reviewing FMAG declarations is expedited. The state can make requests by phone, and FEMA generally makes decisions within hours. (For more information on the FMAG declaration process, see the Congressional Research Services’ report Fire Management Assistance Grants: Frequently Asked Questions.)

Agency-Specific Disaster Declarations. Some federal agencies have the authority to make disaster declarations that provide access to their specific programs. For example, at the request of the Governor, the U.S. Small Business Administration can provide a department-specific disaster declaration when certain conditions are met, such as when at least 25 homes and/or businesses in a county have uninsured losses of 40 percent or more of their estimated fair market value. The U.S. Department of Agriculture can also provide a department-specific disaster declaration, at the request of the Governor. These declarations make certain additional types of assistance available, such as emergency loans, as discussed in our post on the main types of disaster assistance.