State Has Hundreds of Funds. State revenues and expenditures are managed through hundreds of separate funds. There are three major types of funds. They are: (1) the General Fund, which is the state’s main operating account; (2) other state funds, which includes special funds, bond funds, and other “nongovernmental cost funds” (such as trust funds); and (3) federal funds.

State Makes Annual Pension Contributions. The state provides pension benefits to retired state employees through the California Public Employees’ Retirement System (CalPERS) pension system. CalPERS state pensions are funded by three sources: investment gains, employer contributions from the state, and employee contributions. The state’s contributions have been rising (due to actuarial assumption changes and lower-than-assumed investment returns) and are expected to continue to rise over the next several years. Specifically, the state’s CalPERS pension contributions are expected to increase by more than 25 percent between now and 2023‑24.

Employer Contributions Paid From Each Fund. State employee salaries are paid by the General Fund or other funds, depending on the employees’ work. Employee benefits—like pensions—are paid by the same fund as the employees’ salaries. Employer contributions to CalPERS are based on payroll. Some funds—like the Motor Vehicle Account (MVA)—primarily support operations performed by state employees (such as registering vehicles), and therefore have relatively high associated state pension costs. Other funds primarily pass funding through to local governments and therefore do not support many state employees and as such have low state pension costs.

CalPERS Has Five State Pension Plans. Depending on their job, state employees earn pension benefits under one of five CalPERS plans. These five plans are: Miscellaneous, Industrial, Safety, Peace Officer/Firefighter, and Highway Patrol. For example, the Safety plan includes state employees who are employed in law enforcement, fire suppression, and public safety, but are not designated peace officers or firefighters. (This includes, for example, employees at state prisons who come into regular contact with inmates but who are not correctional officers.) Each of these plans is funded by a different set of funds. For example, the General Fund pays most of the costs associated with Peace Officers and Firefighters because the General Fund is the major source of funds for the California Department of Forestry and Fire Protection and the California Department of Corrections and Rehabilitation, which employ these workers. Conversely, the MVA is the major source of funds for employees enrolled in the Highway Patrol plan. The Miscellaneous plan—the largest state pension plan—receives contributions from many different fund sources, of which the General Fund and federal funds are the largest. Figure 1 summarizes the largest funding sources for each CalPERS plan. (This figure uses 2016‑17 data from a statewide drill and is more accurate than the annual Department of Finance [DOF] pension contribution display, which is only for informational purposes.)

State Funds Face Fiscal Pressure Related to Pensions, Including MVA. The General Fund is in good fiscal position this year, with an estimated surplus of around $20 billion. However, not all state funds are in the same position. Some, for example the MVA, have experienced faster growth in expenditures compared to revenues, resulting in an operating deficit. In 2018‑19, the MVA faces an operational shortfall of almost $400 million. Absent corrective actions, the account likely again would experience an operational shortfall in 2019‑20 and potentially become insolvent in the future.

Governor Proposes $3 Billion Supplemental Payment to CalPERS. The administration proposes making a $3 billion supplemental payment to CalPERS in July of 2019, attributed to expenditures in 2018‑19. Similar to the supplemental payment made in 2017‑18, this proposal would save the state money over the long-term. Over the next few decades, CalPERS would have more assets earning investment returns for more time—resulting in lower employer contributions than would otherwise be the case. Figure 2 shows CalPERS’ projection of employer contributions with and without the payment under the median “stochastic” scenario. (A stochastic analysis examines a range of possible outcomes based on many investment return scenarios.) With the payment, the employer contribution rate is expected to be around 1 percent of pay lower each year until nearly 2040—representing an average of around $225 million in savings per year. In total, this stream of gross savings sums to $9.3 billion. After subtracting the initial payment of $3 billion, this would mean the state would accrue $6.3 billion in net savings over about 30 years. 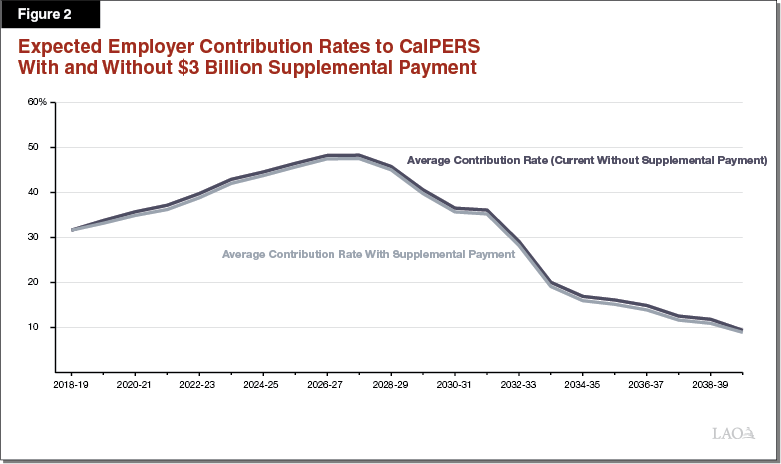 Payment Distributed to Four of Five CalPERS Plans. DOF proposes that the $3 billion payment be distributed across the pension plans in a way that is proportionate to each plan’s share of the state’s General Fund contribution to CalPERS. This means that only four of the five CalPERS plans would receive a supplemental payment. The Highway Patrol plan, which does not receive any General Fund support, would not receive a payment or associated savings. Figure 3 shows how the administration proposes allocating the $3 billion among the five plans and the expected gross and net savings to each plan.

Savings Would Be Distributed Among All Funds That Make Pension Contributions to Plans. The savings each plan receives would be distributed proportionally to each fund that pays its pension costs. For the four plans receiving a payment, this means the benefit of the payment would be distributed proportionally across all contributing funds (for example, as shown in Figure 1). Consequently, the General Fund would only receive $6 billion of the total $9.3 billion in gross savings. Because the General Fund would pay the full $3 billion supplemental payment, its net savings would be $3 billion. All other funds would receive a respective share of the gross savings. (Other funds’ net savings would be the same as their gross savings because, under the Governor’s plan, they would not be contributing to the supplemental payment.) Under the median stochastic scenario, federal funds would receive savings of $500 million, the State Highway Account would save $340 million, the California State University Trust Fund would save $255 million, and the MVA would save $260 million.

To address the shortcomings we have identified with the Governor’s plan, we offer a few alternative strategies for the supplemental payment. Figure 4 shows how the payments and gross savings would be distributed among CalPERS plans for the Governor’s proposal and the three alternatives. They are described in turn in this section.

Alternative 1: Keep DOF Distribution, but Require Other Funds to Repay General Fund. A first alternative to the Governor’s proposal would be to keep DOF’s proposed distribution of payments by plan, but require funds that benefit from this plan to repay the General Fund. Under this alternative, the $3 billion would still be distributed to only four of the five plans, but funds would repay $1 billion, over time, back to the General Fund for their shares of the contribution. (Many funds might not have the resources to repay the General Fund right away, but could use their accrued savings from lower pension payments over time to make these repayments.)

Alternative 2: Distribute the Payment Based on Unfunded Liability and Require Repayments. If the Legislature wanted to make a payment to all CalPERS plans, it could distribute the payment according to each plan’s unfunded liability and require the benefiting funds to repay the General Fund in proportion to their benefit. Under this second alternative, the $3 billion would be distributed among all five plans and other funds would repay $1.5 billion to the General Fund.

Alternative 3: Make Full Payment to Peace Officers and Firefighters Plan. One concern about administering the proposal using repayments is the administrative complexity involved. While the state is already administering repayments for the 2017‑18 CalPERS supplemental payment, we understand that this process has been administratively burdensome for DOF and the State Controller’s Office. A third alternative, which would maximize General Fund benefit without a complicated repayment system, would make the entire supplemental payment to Peace Officers and Firefighters plan. Because this plan is nearly entirely General Fund supported, the vast majority of the benefit would still accrue to the General Fund.

Anticipated Payments and Savings by CalPERS Plan Under Alternative Proposals

Spreading Payments Among All State Plans. A key limitation of nearly all of the alternatives and the Governor’s plan is that they do not generate benefit for all CalPERS plans. This is particularly true for the third alternative, which would allocate the entire payment to only one plan—Peace Officers and Firefighters. Only the second alternative—allocating the payment by unfunded liability—would produce benefits for all plans and employee types.

Maximizing Potential Benefit to the MVA. In addition to proportionally allocating benefit among all employee types, there is another key benefit of the second alternative. Specifically, this alternative would maximize potential savings for the MVA, somewhat reducing the fund’s ongoing structural imbalance. Figure 6 shows the net benefit to the MVA from each of the alternatives. Lower pension payments—and a net benefit of roughly $700 million over 30 years—could put the fund in a slightly better condition over the long-term.

Alternative 2 Would Produce the Highest Net Benefit for MVA

Various Goals for the Supplemental Payment. A supplemental payment to CalPERS would help address the state’s retirement unfunded liabilities. The Governor proposes one way to distribute the supplemental payment across the state’s five pension plans. In this analysis, we discussed three alternative distribution plans. Figure 7 summarizes important factors for consideration for each of these proposals. Namely, these factors are whether the proposal: (1) maximizes General Fund benefit, (2) provides benefit to the MVA—a large fund that faces fiscal pressure as a result of rising pension costs and other cost pressures, and (3) distributes benefits to all CalPERS plan types. There are trade-offs between each of the alternatives—the “right” plan depends on what goals the Legislature hopes to achieve.

Suggest the Legislature Consider Alternative 2 for Supplemental Payment. While relatively administratively simple, the Governor’s proposal would result in the smallest General Fund savings of the four options. The two alternatives that provide the greatest General Fund benefit—Alternatives 1 and 3—create preferential treatment by not benefitting all employee groups. Also, neither of these alternatives create much benefit (if any) for the MVA—a large fund that faces fiscal pressure as a result of rising pension costs. As such, the Legislature may have a preference for Alternative 2, which would distribute the payment by unfunded liability to the various plans and require each fund that benefits—including federal funds—to repay the General Fund for their shares of the initial payment. As shown in Figure 7, Alternative 2 creates slightly more General Fund benefit than the Governor’s proposal, but also ensures all plans and funds, including MVA, derive their proportionate share of benefit from the supplemental payment.