With the May Revision (and prior to the May Revision with the release of proposed implementing legislation), the administration has provided additional details on its January proposal to impose a state individual mandate and use penalty revenues from the mandate to fund health insurance subsidies. Below, we summarize key updates to the Governor’s proposals and raise some issues for the Legislature’s consideration.

Subsidies to Be Modeled After Federal Advance Premium Tax Credit (APTC). The administration’s subsidies would limit a qualifying household’s net premium payments to a certain percentage of income that depends on a households annual income. Figure 1 displays how this percentage would change for different income levels under both the federal APTC and under the Governor’s proposed state subsidies. For example, for a household with income of 300 percent of the federal poverty level (FPL), the federal APTC limits the household’s net premium cost to about 10 percent of income. Under the Governor’s proposed state subsidy, the household’s net premium costs would be further limited to just less than 9 percent of income. Like the federal APTC, the state subsidy could be advanced to health insurers to immediately reduce the household’s monthly premiums. At the end of the year, the state subsidies would be reconciled through the state income tax system. The proposed state subsidies would be available beginning in 2020, but Figure 1 shows hypothetical income amounts for a household of two in 2019 because 2020 FPL amounts have not yet been determined. 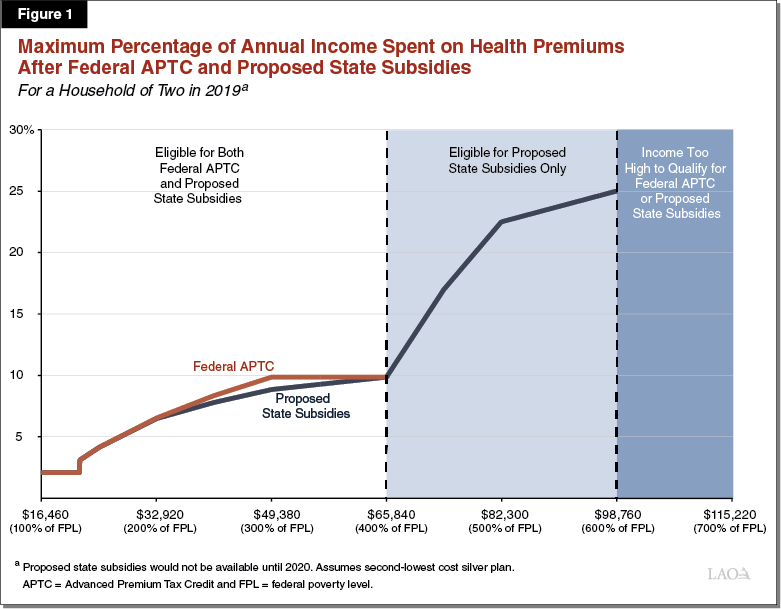 . . . With Relatively Smaller Subsidies for Households Eligible for Federal Assistance. The remaining 25 percent of subsidies in 2020 would be allocated to households with incomes between 200 percent and 400 percent of the FPL that are currently eligible for the federal APTC. The administration estimates that the average subsidy for households in this income range would be about $10 per month.

Subsidies Would Sunset at the End of 2022. The administration proposes to make the subsidies available for three years, with a sunset at the end of 2022. Consistent with the January proposal, subsidies provided over this period would be fully covered by individual mandate penalty revenues. However, because households required to pay the penalty will not do so until early 2021 (when state income taxes are filed for 2020), the state General Fund would cover the cost of subsidies provided in 2019‑20, as shown in Figure 2. Penalty revenues generated after the subsidies sunset would be used to reimburse the General Fund for the costs not covered by penalty revenues in prior years, including in 2019‑20. Unlike the proposed state subsidies, the individual mandate penalty would be ongoing.

No Concerns With Proposal for Administration of Penalty and Subsidy Reconciliation. The May Revision budget includes $8.2 million in 2019‑20 for the Franchise Tax Board to implement the proposed state individual mandate penalty and to reconcile state insurance subsidy payments. Following one-time start-up costs, administration of the individual mandate penalty would be funded on an ongoing basis because it would not have a sunset date.

Proposal to Sunset Subsidies Raises Questions. As we note in our office's Initial Comments on the Governor’s May Revision, the Governor sunsets a variety of budget-year proposals in order to maintain a balanced budget through the forecast period ending in 2022‑23. We raise a number of concerns with the Governor’s approach, finding that the May Revision understates the true ongoing cost of its policy commitments.