Comparing Taxes on Cannabis to Taxes on Other Products in California

Excise Taxes on Alcohol, Tobacco, and Sugary Drinks. Figure 1 describes the excise taxes levied by various levels of government on alcoholic beverages, tobacco products, and sugary drinks. These taxes take a variety of forms, including:

Cannabis Subject to Various State and Local Excise Taxes. As shown in Figure 1, California’s state and local governments levy a variety of excise taxes on cannabis, including:

Taxes on Cannabis Flower Roughly Comparable to Spirits, Much Higher Than Beer and Wine. In Figure 1, some similarities and differences between cannabis taxes and other excise taxes are apparent. For example, most of these goods are taxed by two levels of government—alcohol and tobacco by federal and state governments and cannabis by state and local governments. In Figure 2, we present estimates of the total amount of federal, state, and local excise taxes levied on representative amounts of alcohol and cannabis. This comparison can be instructive, as a common purpose for using these substances is intoxication. As shown in the figure, the typical total excise tax on a quarter-gram joint appears to be roughly similar to the typical total excise tax levied on three shots of liquor. In contrast, typical excise taxes on beer and wine appear to be much lower. (We chose these quantities because, in many cases, they might be sufficient to intoxicate novices or other low-tolerance users.) Although we know of no similarly suitable way to compare cannabis taxes to tobacco taxes, taxes on tobacco clearly are very substantial. 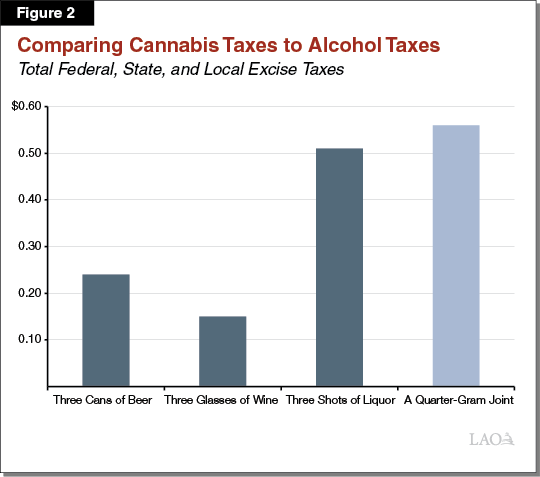 Comparing Taxes on Cannabis to Taxes on Medicines

Taxes on Medical Cannabis. Many people use cannabis for medicinal purposes. Medical cannabis is exempt from certain taxes under three scenarios. First, cannabis is fully exempt from state and local sales taxes if purchased for medical use with a valid state medical identification (ID) card, which requires a physician’s recommendation, county health department approval, and an application fee. (Administrative data suggest that this sales tax exemption applies to less than two percent of all cannabis sales.) Second, under a new law that takes effect January 1, 2020 (Chapter 837, Statutes of 2019 [SB 34, Wiener]), medical cannabis products that businesses donate to consumers free of charge (and that meet other conditions) are fully exempt from the state’s cannabis excise taxes. Third, some cities and counties levy lower excise tax rates on purchases made with a doctor’s recommendation than on nonmedical (often called adult-use) sales.

Comparison Between Medical Cannabis and Other Medicines. Under state law, doctors may recommend cannabis for their patients. Due to federal cannabis criminalization, however, doctors may not write prescriptions for cannabis. As a result, cannabis is not eligible for the sales tax exemption for prescription medicines. We estimate that most cannabis purchased with a doctor’s recommendation is subject both to sales taxes and excise taxes because the purchaser does not have a state-issued medical ID card, resulting in a higher overall tax rate than other medicines. That said, in some instances, the exemptions described above could result in tax rates on medical cannabis that are comparable to tax rates on other medicines.