This report presents our office’s independent assessment of the condition of the state General Fund budget through 2024‑25 assuming the economy continues to grow. The first section of the report presents our analysis of the budget condition under two different revenue forecasts. Throughout this analysis, we use our own forecast of expenditures assuming May Revision proposals are adopted. The second section provides our comments, including the implications of the state appropriations limit (SAL).

Under Our Revenue Forecast, Budget Would Remain Largely Balanced. Figure 1 summarizes the budget’s condition assuming the Governor’s May Revision policies were enacted, but using LAO revenue estimates. Under our estimates, recent gains in revenues—particularly from taxes on higher income earners—would persist and continue to grow close to the historical average rate. (For more discussion of our assumptions, please see: The 2021‑22 Budget: May Revenue Outlook.) As the figure shows, under these estimates, the state would have an operating deficit in 2022‑23, but operating surpluses in the subsequent two years. (An operating deficit means expenditures would be greater than revenues in that year.) Despite this, the 2022‑23 budget—under the May Revision proposals—would be nearly balanced due to the carry in balance. (The carry in balance is revenue collected from prior years carried forward.) This outcome means the Governor’s proposals for 2022‑23 depend on revenue growth to balance the budget. In addition, the state’s capacity for new spending in subsequent years would require revenue growth at least as fast as our forecast. As we describe in the revenue post, there is roughly equal chance the budget situation could be better or worse than our revenue forecast indicates. 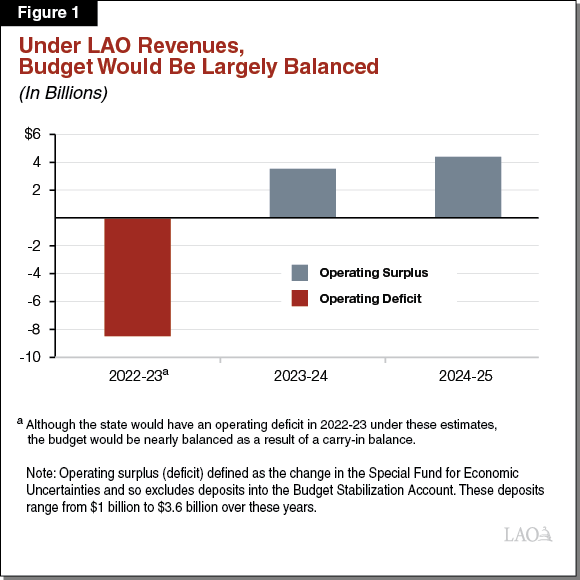 In Departure From Recent Years, Administration May Be Underestimating Costs. Our office and the administration often have different estimates of the multiyear costs of caseload driven programs, such as those in health and human services (HHS). In past outlooks, we have noted that their costs tend to be higher than ours, although the precise reason for these differences is often unknown because we do not have the administration’s program-level forecasts. This year, however, our estimates of costs (excluding formula-driven costs) are substantially higher than the administration’s across a number of budget areas, including HHS. All told, by the last year of the outlook, our estimate of these costs is several billion dollars higher.

Expenditures Uncertainty Heightened. Typically, our office focuses on uncertainty related to revenue estimates. This year, we also highlight the uncertainty surrounding expenditures given not only the number of new proposals, but also the proposals’ size and the limited information from the administration about how it arrived at its estimates. The Legislature’s ability to track and assess the reasonableness of the costs of these proposals is limited given the constitutional budget deadline is less than a month away. Moreover, the May Revision includes some proposals—like those related to behavioral health services for children and youth—that could increase costs in the future, although the administration does not account for them. While we have presented our best assessment of the budget condition, our expenditure estimates are subject to increased uncertainty, which could affect the budget’s bottom line.

Under Administration Revenues and LAO Expenditures, Budget Would Have Significant Structural Deficits. Figure 2 summarizes the budget’s condition assuming the Governor’s May Revision policies were enacted, but uses the administration’s lower revenue estimates (and revenue-driven costs, namely Proposition 98 [1988] and Proposition 2 [2014]). The figure also assumes LAO estimates of other programmatic costs. We include this alternative scenario because although the administration’s revenue forecast is more cautious than ours, it still is highly plausible. Under this scenario, the budget would have significant operating deficits in every year of the multiyear outlook. This means, under a more cautious revenue outlook, such as the administration’s forecast, the state cannot afford the Governor’s May Revision policies while maintaining current services. 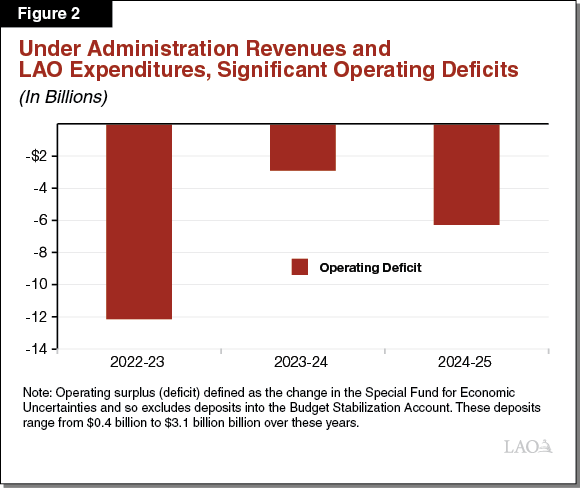 May Revision Hinges on Steady Revenue Growth Without Restoring Key Budget Safeguards. The May Revision proposes to spend significantly more than the state is projected to collect in revenues in 2021‑22 and 2022‑23. Future revenue growth could allow revenues to catch up to spending, as they do under our revenue forecast, but any deviations from steady growth would leave the state with a sizeable budget problem. Exacerbating this issue, the May Revision proposes very limited actions to make up for the budget solutions utilized last year, which help insulate programs from cuts in a future downturn.

Recommend Restoring $12 Billion of Budget Tools Used Last Year. The Legislature withdrew over $8 billion from reserves and utilized billions in borrowing last year when the pandemic was expected to decimate revenues. That did not occur, however. In fact, the state now anticipates the largest year-over-year revenue increase in 40 years. Reserves are not intended to sustain state spending when revenue collections are robust. Consequently, to protect against future recessions, we recommend the Legislature restore the $12 billion in outstanding budget tools used in last year’s budget package.

Recommend Adjusting Budget Choices Based on Revenue Assumptions. The Legislature’s selection of revenue estimates for the budget should reflect its risk tolerance. If the Legislature adopts:

State Appropriations Limit Poses Major Risk to Budget Multiyear Condition. The May Revision anticipates the state will collect $16 billion in revenues in excess of the SAL. Our recent analysis suggests this is likely to continue to occur; however, the extent to which it does depends on many factors, including future decisions by the Legislature. Consequently, this analysis does not attempt to calculate the amount of possible excess revenues in future years. Under the Governor’s May Revision proposals, however, in future years, the state could collect revenues in excess of the SAL, but not have a surplus. If that occurred, the state would need to make cuts to existing programs in order to meet its constitutional requirements. This possibility poses a major risk to the multiyear budget condition and the state’s ability to pay for the level of services proposed in the May Revision.

While the state faces a historic surplus, a spending level beyond what is proposed by the Governor would require the Legislature to identify proposals to reject. Moreover, our analysis finds that the level of ongoing spending proposed by the Governor is only supportable with a revenue forecast that is more optimistic than the administration’s current estimates. Consequently, the Legislature will need to determine its comfort level with different revenue assumptions in determining its level of ongoing spending.