Revenue from quarterly cap‑and‑trade auctions is deposited in the Greenhouse Gas Reduction Fund (GGRF), and the funds are allocated to various climate‑related programs. In this post, we (1) summarize the results from the recent November 2021 cap‑and‑trade auction, (2) estimate future GGRF revenue and the amount available for discretionary spending under three different scenarios, and (3) identify issues for legislative consideration as it begins its 2022‑23 budget deliberations.

November 2021 Auction Generates $1.3 Billion in GGRF Revenue. The California Air Resources Board (CARB) released a summary of the results from the most recent quarterly cap‑and‑trade auction held on November 17, 2021. Based on the preliminary results, the state will receive an estimated $1.3 billion in revenue from the auction—the highest amount for any quarterly auction in the program’s history. As shown in Figure 1, this amount is somewhat more than what the state received from the August 2021 auction ($1.1 billion). The change is due primarily to an increase in allowance prices. Allowances sold for $28.26 at the current auction and $34.01 at the advance auction, or about $5 and $10 higher, respectively, than the prices at the August auction. The November prices were significantly higher than the auction floor price established by CARB ($17.71 for both vintages). 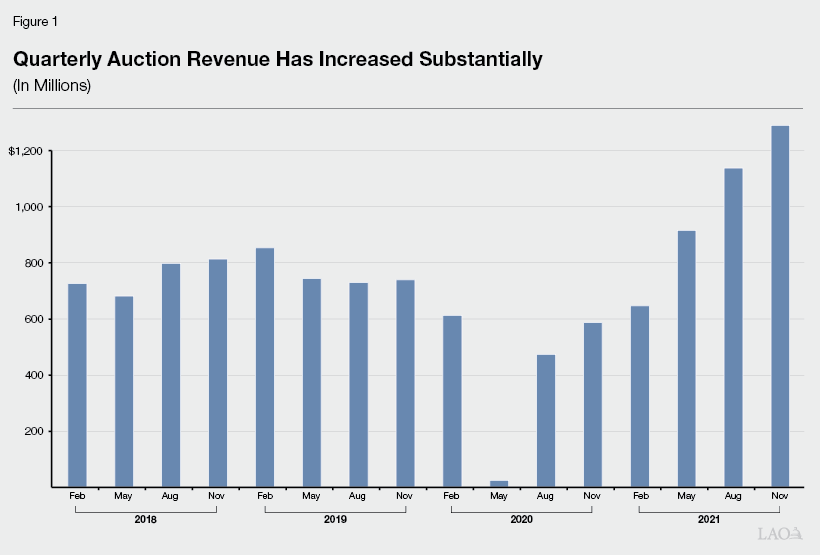 Auction Generates $732 Million More Than the 2021‑22 Budget Assumes. The 2021‑22 budget for GGRF—approved in September 2021—assumes $2.8 billion in total auction proceeds, including $557 million from the November 2021 auction. Based on the November auction results, the state will generate about $732 million more than the budget assumes. Under current law, about 65 percent of this additional revenue ($439 million) will be continuously appropriated to high‑speed rail (25 percent), affordable housing and sustainable communities (20 percent), transit capital (10 percent) and operations (5 percent), and safe drinking water (5 percent). (The continuous appropriation for safe drinking water is capped at $130 million annually.) The remaining $293 million will be available for future discretionary spending. As we discuss below, future cap‑and‑trade auctions could also exceed 2021‑22 budget assumptions and generate additional revenue for discretionary programs.

Market Prices Have Become the Primary Driver of Revenue Uncertainty. Historically, when allowance prices were consistently near the floor price, changes in quarterly cap‑and‑trade auction revenue were largely driven by differences in the number of allowances that would sell at each auction. In contrast, if allowance prices remain well above the floor price then all allowances will likely be sold at auctions in the next couple of years. Instead, the primary driver of revenue uncertainty is now related to future allowance prices. Based on our understanding of market trends, the recent increase in allowance prices has at least partly been driven by more “non‑compliance” entities buying and selling allowances. For example, investment firms are purchasing allowances with the expectation that prices will increase in the future and the allowances can be sold for a profit. As a result, future market prices will be determined, in part, by the behavior of these investment firms. This market dynamic makes it difficult to predict future allowance prices and GGRF revenue.

Stable Prices Would Generate Over $4 Billion in Total Annual Revenue. We estimate 2021‑22 and 2022‑23 auction revenue under three different allowance price scenarios, as shown in Figure 2: 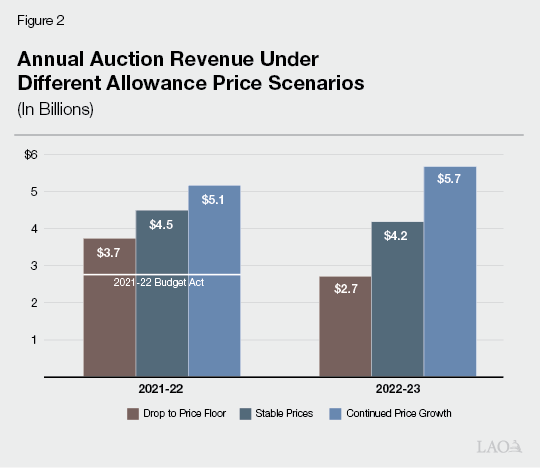 About $2 Billion Available for Discretionary Spending and/or Reserve in 2022‑23. Under current law, about 65 percent of auction revenue is continuously appropriated to certain projects and programs. In addition, beginning in 2022‑23, the Legislature continuously appropriated $200 million annually for forest health and wildfire prevention. This $200 million is taken “off the top” before calculating the other continuous appropriation percentages. The remaining revenue is available for appropriation by the Legislature through the annual budget for other ongoing funding commitments (such as state administrative costs and statutory transfers), as well as discretionary spending programs. (These funds do not count toward the State Appropriations Limit which, as we discuss in our recent Fiscal Outlook, likely will be a key consideration in the Legislature’s upcoming budget deliberations.) 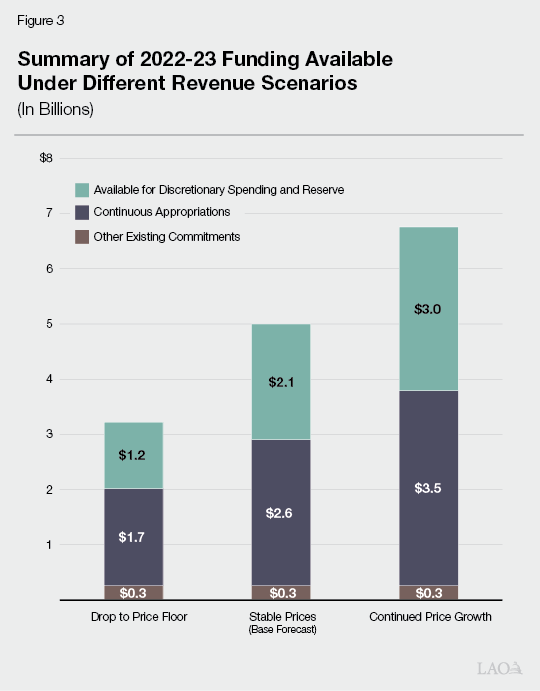 We will provide the Legislature with updated revenue forecasts in the coming months as more information becomes available, including the results of future quarterly auctions. However, based on recent increases in allowance prices, we think the Legislature should begin to think about how it might allocate a substantial increase in GGRF revenue. Below, we identify a few key issues for the Legislature to consider as it begins its 2022‑23 budget deliberations.

What Level of GGRF Reserve Is Needed to Address Revenue Uncertainty? If the Legislature assumes stable allowance prices, it might want to maintain a substantial reserve in the GGRF (also known as a fund balance) in case revenue is lower than expected. For example, in previous reports, we suggested a reserve of about 10 percent of estimated annual revenue is a reasonable starting point. Under our base revenue forecast, a 10 percent reserve would be slightly more than $400 million—which would leave about $1.7 billion available for discretionary programs. Alternatively, the Legislature could take a more conservative budgeting approach by allocating $1.2 billion to discretionary programs—a spending level that could be met even under a scenario where allowance prices drop to the floor price. If actual revenue available exceeds the budgeted level, the additional revenue would be deposited in the fund and allocated in future years.

Depending on its spending priorities, the Legislature could consider a variety of modifications to the continuous appropriations. For example, if the Legislature considers certain discretionary programs higher priority, it could give those discretionary programs first call on future auction revenue. This could be similar to the Legislature’s action to allocate $200 million “off the top” to forest health and wildfire prevention as part of the 2021‑22 budget agreement. The Legislature could also consider allocating a specific annual amount to each continuously appropriated program, rather than a set percentage of auction revenue. This approach would provide a more consistent funding amount for these programs. Plus, if annual revenue continues to grow, this structure would allow the Legislature to use the annual budget process to determine how to allocate the additional funding in a way that best reflects its changing priorities.

How Should the Legislature Allocate Discretionary Funding? The Legislature will have to weigh many different spending priorities when considering how to allocate discretionary funding. One important factor to consider is that the 2021‑22 budget agreement included multi‑year funding commitments, including for some programs that have received GGRF funding in prior years. For example, as previously mentioned, the Legislature approved a $200 million GGRF continuous appropriation for forest health and wildfire resilience for the next several years. In addition, the budget agreement included multi‑year zero‑emission vehicle funding package that includes General Fund allocations for low carbon transportation in 2022‑23 and 2023‑24. Many of these low carbon transportation programs previously received GGRF. (For more detail on these multi‑year funding packages, see our post The 2021‑22 Spending Plan: Natural Resources and Environmental Protection.) The Legislature will want to consider the degree to which its 2022‑23 cap‑and‑trade expenditure plan should supplement these efforts versus targeting other areas not already addressed in the packages. For example, other areas of focus could include reducing local air pollution and supporting climate adaptation activities.

As we have emphasized in previous reports, the Legislature is not limited to focusing its cap‑and‑trade expenditure plan on spending options. We recommend the Legislature consider using a portion of GGRF revenue to provide direct financial support to households and/or businesses. For example, the Legislature could use GGRF to provide lump sum rebates to households, reduce other state taxes (such as sales tax rates), or use the funds to reduce retail electricity rates. Importantly, each of these “revenue recycling” options could be structured in a way that maintains cap‑and‑trade’s incentive for households and businesses to reduce greenhouse gases, while also partially or fully offsetting the financial impact of cap‑and‑trade prices on businesses and consumers—particularly low‑ and moderate‑income households. In our view, these revenue recycling options become even more attractive if allowance prices—and associated impacts on energy prices—continue to increase.