August 2021 Auction Generates Over $1.1 Billion in State Revenue. The California Air Resources Board (CARB) released a summary of the results from the most recent quarterly cap-and-trade auction held on August 18, 2021. Based on the preliminary results, the state will receive an estimated $1.14 billion in revenue from the auction—the highest amount for any quarterly auction in the program’s history. As shown in Figure 1, this amount is significantly more than what the state received from the May 2021 auction ($916 million). The change is due primarily to an increase in allowance prices. Allowances sold for $23.30 at the current auction and $23.69 at the advance auction, which are about $4.50 more than the prices at the May auction. The August prices were also more than $5.50 above the auction floor price established by CARB ($17.71 for both vintages). 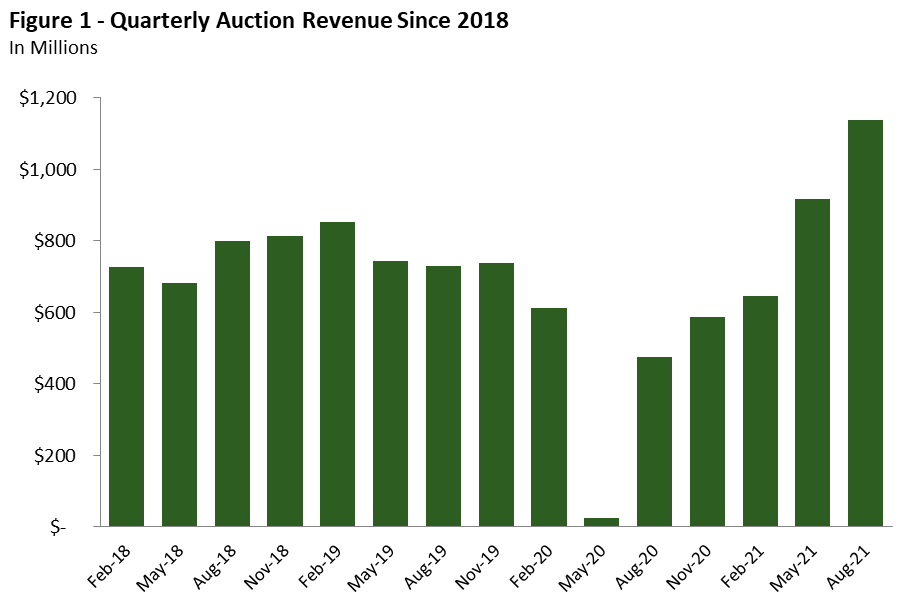 The revenue in both May and August were also significantly higher than prior auctions because each auction offered (and sold) about 12 million state-owned allowances that previously went unsold in the May 2020 auction. The cap-and-trade regulation requires that unsold allowances from previous auctions get reoffered at subsequent auctions, under certain conditions specified in the regulation.

Revenue $581 Million Higher Than Budget Assumes—Additional $203 Million Available for Discretionary Spending. Auction revenue is deposited in the Greenhouse Gas Reduction Fund (GGRF). At the time of the May Revision, the Department of Finance (DOF) estimated that total auction proceeds in 2021-22 would be $2.3 billion. Under current law, a total of 65 percent of auction revenue is continuously appropriated to the high-speed rail project (25 percent), Affordable Housing and Sustainable Communities Program (20 percent), Transit and Intercity Rail Capital Program (10 percent), low carbon transit operations (5 percent), and safe drinking water (5 percent). The remaining 35 percent of auction revenue is available for appropriation by the Legislature for other ongoing funding commitments (such as state administrative costs and statutory transfers), as well as various discretionary spending programs. Based on May Revision estimates, about $1.3 billion—including 2021-22 revenue and unspent revenue from prior auctions—would be available for discretionary programs. Budget bills approved in June appropriated a total of $684 million from GGRF for discretionary expenditures.

The preliminary auction results suggest the August auction will generate about $581 million more than DOF assumed at the time of the May Revision. Of this amount, about $377 million will be allocated to these continuously appropriated programs, and $203 million will be available for discretionary spending, which can be appropriated by the Legislature as part of its remaining 2021-22 budget discussions or in future years.