Summary. The state appropriations limit (SAL) constrains how the Legislature can use revenues that exceed a specific threshold. Given recent revenue growth, the SAL has become an important consideration in the state budget process and will continue to constrain the Legislature’s choices in this year’s budget process. This post provides our office’s initial analysis on and comments about the Governor’s proposals to address SAL requirements in the 2022‑23 Governor’s Budget.

How Does the SAL Work?

In the late 1970s, voters passed Proposition 4 (1979), which added Article XIIIB to the State Constitution. Article XIIIB established an appropriations limit on the state and most types of local governments. (These limits also are referred to as “Gann limits” in reference to one of the measure’s coauthors, Paul Gann.) The limits later were amended by Proposition 111, which was passed by voters in 1990. For more information about the history of the appropriations limit, see our previous reports, including: The State Appropriations Limit. 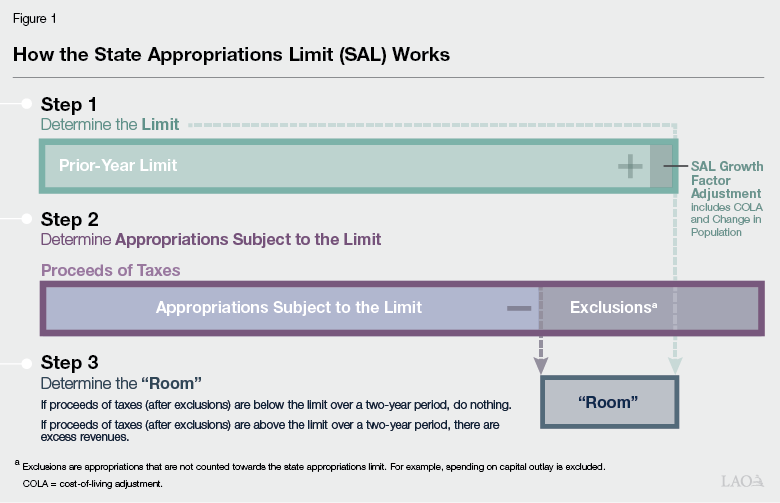 How Does the Legislature Meet the Constitutional Requirements Under the SAL? As implied by Figure 1, if appropriations subject to the limit are expected to exceed the limit, the Legislature can: (1) lower proceeds of taxes, (2) increase exclusions, or (3) split the excess revenues between additional school and community college district spending and taxpayer rebates. (Exclusions include: subventions to local governments, capital outlay projects, debt service, federal and court mandates, and certain kinds of emergency spending.)

How Have SAL Requirements Changed?

When the 2021‑22 Budget Act was enacted in June 2021, the state anticipated there would be room under the limit, across 2020‑21 and 2021‑22, of $16.9 billion. At Governor’s budget, under the administration’s updated revenue estimates and budget proposals, there are excess revenues of $2.6 billion across these years—a net $19.5 billion change in the state’s SAL position. (These requirements also differ somewhat from the requirements our office estimated in the November Fiscal Outlook. We describe these changes in more detail in the nearby box.) As shown in Figure 2, this change has the following components:

How Do These SAL Requirements Compare to Our Fiscal Outlook?

Prior Year and Current Year. In our November Fiscal Outlook, we estimated the state would have $14 billion in state appropriations limit (SAL) requirements to address across 2020‑21 and 2021‑22, compared to the administration’s estimate of $2.6 billion. There are two major reasons for the difference (in addition to many other smaller differences). First, the administration’s SAL revenue estimates (excluding proposals) are lower than ours by about $6 billion across 2020‑21 and 2021‑22. Second, the Governor’s budget proposes reallocating over $3 billion in transportation funds, which count as exclusions, which our office assumed would revert to the General Fund.

Budget Year. In our November Fiscal Outlook, we estimated the state would have $12 billion in SAL requirements to address in 2022‑23. The administration shows room of $5.7 billion. The key reason for this difference is that our estimates did not make any assumptions about how the surplus would be allocated. The Governor’s budget, by contrast, proposes allocations for the surplus, including to purposes that meet SAL requirements, such as additional spending on capital outlay and reductions in tax revenues. (We discuss these specific proposals in greater detail below.) In addition, some of our assumptions are different. For example, the administration’s tax revenue estimates (excluding policy proposals) are lower than ours by $3 billion in 2022‑23.

What Are the SAL Requirements Under the Governor’s Budget?

Some Proposals Help Address Requirements... The Governor’s budget includes proposals—both revenue reductions and spending increases—that help the state address its SAL requirements. In particular, these include:

…But Excess Revenues Remain Outstanding. After accounting for revenue reductions and excluded spending, the Governor’s budget estimates there would be $2.6 billion in excess revenues from 2020‑21 and 2021‑22. The Governor’s budget does not set aside a portion of the surplus to meet this requirement. (The constitution allows the state two years to address this requirement.)

What Happens to the SAL if Revenue Estimates Change?

Revenue estimates change throughout the fiscal year and the Governor’s May Revision will reflect new revenue estimates that incorporate the latest collected data—particularly from the key revenue month, April. This section describes how updated revenue estimates are likely to affect the state’s SAL position—and, by extension, the surplus.

Typically, Each $1 in Unanticipated Revenues Results in $0.40 in Additional Surplus. When the state has a surplus, an additional $1 of unanticipated revenues typically would result in about $0.40 of additional surplus—although this can vary widely depending on specific conditions like stock market performance and school attendance. The state’s surplus does not increase by $1 for each $1 in additional revenues because of the state’s constitutional requirements, which require the state to allocate revenues to particular uses. Specifically, for each $1 in unanticipated revenues:

This Year, Each $1 Increase in Current‑Year Tax Revenues Also Will Result in $1 in Additional SAL Requirements. This year, additional revenues will result in even more constitutional requirements. In particular, each $1 of additional revenue estimated in either 2020‑21 and/or 2021‑22 also will increase SAL requirements by $1. While some of the additional spending required by Propositions 98 and 2 could be excluded from the SAL, it is not a requirement. Depending on various spending choices made, the constitutional requirements of Propositions 4, 98, and 2 largely should be considered additive.

Each Additional $1 in Revenue Could Increase Requirements by $1.60 or So. The bottom line of the factors above is that, for each additional $1 revenue collected (especially in the current year), total constitutional requirements could increase by around $1.60. Counterintuitively, the dynamics are such this year that if revenues exceed expectations, Legislative flexibility over the surplus could decrease substantially.

SAL Requirements Likely to Be Higher in May

We Expect Current‑Year Revenues to Be Higher Than the Governor Anticipates. According to our most recent “Big Three” revenue outlook update, there is a 90 percent chance that revenues will exceed Governor’s budget projections for the current year (2021‑22). The most likely outcome is that 2021‑22 revenues will exceed expectations by $5 billion to $20 billion.

Some Currently Non‑Excluded Spending Likely Needs to Be Reduced at May Revision. If revenues exceed expectations by $10 billion in 2021‑22, for example, it could mean constitutional requirements increase by $15.5 billion to $17 billion. As a result, despite significantly higher revenues, the Legislature would have only limited discretion over this additional surplus. Specifically, under this example, the Legislature would need to allocate $10 billion to meeting the SAL requirements after meeting the requirements of Propositions 98 and 2. Consequently, there likely would be far fewer non‑excluded proposals than are included in the Governor’s budget. Figure 4 shows the major Governor’s budget spending proposals not excluded from the SAL.

Two Different Approaches to Addressing SAL Requirements. Given the dynamics described above, the state very likely will face higher SAL requirements at the May Revision. The Legislature has two different options to address these, which can be implemented separately or in tandem. First, the state can take a preemptive approach. Through the iterative budget process, the state can lower revenues and/or spend more on excluded purposes, using a variety of fund sources. This approach lowers appropriations subject to the limit and reduces the potential for excess revenues. Second, the Legislature can choose to address any remaining excess revenues through taxpayer rebates and additional payments to schools and community colleges. We discuss each of these options in turn below.

Address SAL Requirements Preemptively. A preemptive approach involves different options, primarily using surplus funds, but other funds (such as Proposition 98 spending) also can be used. This alternative can include one, or any combination, of the following:

Excess Revenues Must Be Allocated to School Payments and Taxpayer Rebates. The Legislature could meet any remaining SAL requirements by splitting excess revenues between taxpayer rebates and payments to schools and community colleges The Constitution gives the state two years to make these payments, and so the costs could be funded in the 2023‑24 budget. That said, if this is the Legislature’s preferred approach, we recommend setting aside funding to pay for these costs this year. There is no guarantee that next year’s budget will have a surplus and, indeed, could face even more SAL requirements. Setting aside the money now will ensure the state has the resources to pay for these obligations.

This decision will have significant spending implications. For instance, if the Legislature wishes to meet the SAL’s requirements through excluded spending, we recommend determining how to allocate that spending now. Moreover, regardless of how the Legislature wishes to meet the SAL’s requirements, there likely will be significantly less funding available for non‑excluded purposes. As such, we recommend the Legislature determine its priorities for non‑excluded spending. Although the Legislature does not need to finalize its budget now, determining the architecture of its preferred approach will increase its flexibility.