Summary. In this post, we analyze the Governor’s proposed one‑year fuel tax holiday. This proposal presents the Legislature with a tradeoff between reducing fuel expenses and funding state highway projects. 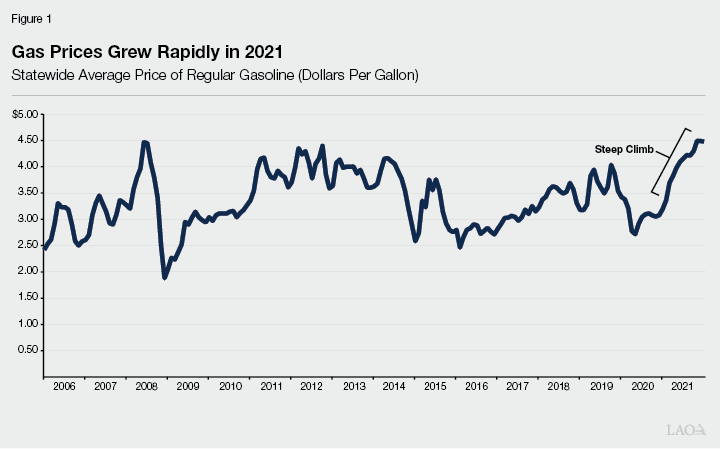 State Adjusts Fuel Excise Taxes Annually. Under current law, the state adjusts its fuel excise tax rates on July 1 every year. Each adjustment reflects a 12‑month change in the California Consumer Price Index (CA CPI)—a broad measure of the prices California households pay for goods and services. For example, the rate adjustment scheduled for July 1, 2022 will reflect the 12‑month change in the CA CPI from November 1, 2020 to November 1, 2021.

Fuel Excise Taxes Support State Highways and Local Transportation Projects. The administration estimates that the state’s fuel excise taxes will raise $8.8 billion in 2021‑22. Roughly two‑thirds of these revenues remain at the state level. Most of this funding supports state highway maintenance, rehabilitation, and improvements, with a smaller amount supporting state programs that fund both state‑led and local‑led highway and transit improvements. The remaining one‑third goes directly to cities and counties to support local street and road maintenance and rehabilitation.

Federal Funding Also Supports Transportation Projects. In addition to state excise tax revenues, the state receives federal fuel excise tax revenue for transportation. In recent years, the state typically has received roughly $4 billion per year for this purpose. Roughly 60 percent remains at the state level to support state highway maintenance and rehabilitation, and 40 percent goes to local governments. The 2021 federal Infrastructure Investment and Jobs Act will provide at least an additional $2 billion per year over five years for state and local transportation projects.

Lower Fuel Tax Rates in 2022‑23. The Governor proposes a one‑year reduction in fuel excise tax rates relative to current law. The amount of this reduction would exactly offset the inflation adjustment currently scheduled for July 1, 2022. As a result, from a taxpayer’s perspective, no rate change would occur on that date. When this one‑year “holiday” ends on July 1, 2023, the state once again would collect the full amount of the fuel excise taxes set by current law, including both the 2022 and 2023 inflation adjustments.

Backfill Funding for Local Programs. As described above, the state’s fuel excise taxes raise revenues that support local transportation projects, such as local street and road maintenance and rehabilitation, as well as local‑led highway and transit projects. The Governor proposes using the State Highway Account—which funds state highway projects—to backfill money to local governments and to state programs that support local projects to offset the revenue they would lose due to the proposed tax holiday. As a result, the proposal ultimately would reduce funding for state highways but not for local programs.

July 1st Rate Changes Would Require Early Action. Advance notice of future tax rates is very helpful for taxpayers and tax administrators. For smooth implementation, the Department of Tax and Fee Administration (CDTFA) generally advises state and local lawmakers to enact sales and excise tax rate changes at least 90 days before they go into effect. If necessary, CDTFA likely could implement a rate change on a shorter timetable, but passing a trailer bill in June would not leave enough time. Consequently, we advise the Legislature to treat July 1st fuel tax changes as an “early action” item to resolve in advance of the main budget package.

Slightly Lower Prices at the Pump. Available evidence suggests that lower excise taxes likely would result in lower retail prices. The exact effect on retail prices is uncertain, but most of the change in the tax rate likely would be passed through to prices at the pump. For example, if the state declined to increase the excise tax by 3 cents per gallon on July 1, retail gasoline prices likely would be 2 to 3 cents per gallon lower than if the state proceeded with the increase.

Less Revenue for Future Highway Projects. Any reduction to fuel tax rates would reduce fuel tax revenues. If the Legislature backfilled local funding as the Governor proposes, then the revenue loss primarily would reduce funding for state highway projects. The California Department of Transportation (Caltrans) plans such projects well in advance, so changes in 2022‑23 revenue likely would affect funding for projects around 2024‑25. Due to the State Highway Account’s estimated beginning balance of $3 billion in 2022‑23, the revenue loss would not affect projects planned for 2022‑23 or 2023‑24.

Effects on Fuel Consumption Likely Modest. The administration has framed many of its January budget proposals as efforts to combat climate change. In contrast, lower fuel taxes—and the lower fuel prices that would result—likely would lead to higher fuel consumption, which in turn could lead to higher greenhouse gas (GHG) emissions and other forms of pollution. That said, two factors could make the net increase in GHG emissions modest—perhaps even zero. First, a temporary price reduction of a few cents per gallon likely would result in a small increase in fuel consumption. (For example, we estimate that the Governor’s proposal would increase gasoline consumption in 2022‑23 by roughly 0.1 percent to 0.2 percent.) Second, the state’s cap‑and‑trade program sets a limit on GHG emissions across various sectors through 2030. If this emissions cap turns out to be binding, then any increase in GHG emissions from transportation fuels will be offset by an equal reduction in GHG emissions from other sources subject to the cap. (Other aspects of the proposal—such as changes in state highway projects—also could have environmental effects.)

Key Tradeoff: Lower Fuel Prices Now or More State Highway Projects Later? As noted above, lower fuel taxes provide benefits for fuel purchasers but reduce funding for state programs (primarily state highway projects). As a rough guideline, for every $175 million in revenue that the state forgoes, it can “buy” a one‑cent per gallon reduction in gasoline tax rates (and a 0.7‑cent per gallon reduction in diesel tax rates). The key question for the Legislature is what balance to strike between reducing fuel expenses and funding state highway projects. The connection between this fundamental policy choice and the annual inflation adjustment is tenuous at best, so we encourage the Legislature to regard the Governor’s proposal as just one among a wide range of options.

Who Gains, and Who Loses? Lower fuel taxes would help people who buy fuel. Future highway projects would help people who drive on highways. These two groups overlap heavily, but there are some key differences. The people who likely would gain the most from a fuel tax holiday are those who purchase a lot of fuel relative to their use of state highways—because they mostly use surface streets, or their vehicles consume a lot of fuel, or both. The people who likely would lose the most are those who use state highways extensively but purchase relatively little fuel—because they drive electric vehicles (or fuel‑efficient vehicles more generally).

One‑Year Holiday Would Make 2023 Increase Steeper. A one‑year tax holiday would not change 2023‑24 fuel tax rates. Consequently, such a holiday would result in a larger tax rate increase in 2023 than the one scheduled under current law. For example, the Governor’s proposal effectively would combine the increases currently scheduled for 2022 and 2023 into a single, larger increase in 2023. Alternatively, the Legislature could consider making these adjustments in a few steps between July 2022 and July 2023.