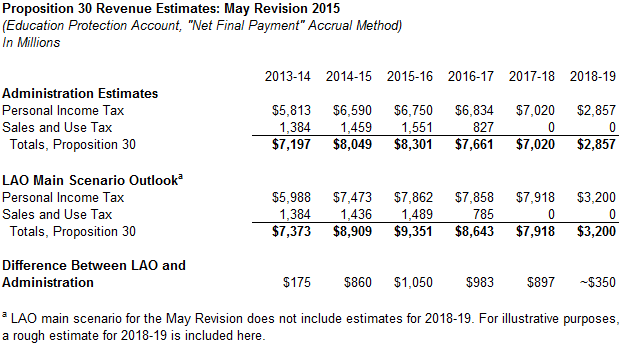 Proposition 30 Revenues Fade Over Several Fiscal Years, Not All At Once. The state budgets on a fiscal-year basis (July 1 through June 30). The structure of Proposition 30 is such that its temporary revenues do not go away all at once in a single fiscal year. Instead, the revenues roll off over several fiscal years. Therefore, the end of the Proposition 30 tax rate increases will not necessarily cause a sudden revenue drop off—a "cliff effect"—for the annual state budget process. As we noted in our November 2014 Fiscal Outlook (see pages 14-15), if the economy is growing at the time the temporary taxes expire, then that scheduled expiration seems likely to result in a slowing of revenue growth, but not necessarily an outright year-over-year decline in total state revenues.

Uncertainties Concerning Revenue Accruals. We have discussed the state's revenue accrual (fiscal-year attribution) practices on various occasions over the last four years. While the state's pre-Proposition 30 accrual practices were difficult enough to estimate, the  completely different accrual method for Proposition 30 and 39 revenues first approved by the Legislature in 2012 adds considerably to the complexity of state revenue estimation.

Because there is no regularly updated, clear, and verifiable description of all of the accrual and related adjustments in budget revisions, we are unable to independently evaluate the administration's accrual estimates with precision. Given the executive branch's large degree of autonomy in implementing the state's accrual laws and practices, we defer to the administration's numbers to a large extent for the current and prior fiscal years. This leads to the possibility that “final” Proposition 30 totals for 2013-14 and 2014-15—and the overall state revenue numbers affected by those accruals for those fiscal years—will prove over time to be quite different from our current estimates. For 2014-15, in particular, such differences could affect Proposition 98 funding requirements by hundreds of millions of dollars or more.