Vacation Homes Becoming More Common in Many Parts of California

The rising popularity of short-term rental websites such as Airbnb and HomeAway has increased interest in the role of vacation homes in California communities. This post uses American Community Survey (ACS) data to look at county-level trends in vacation homes across California. (We look at only the state’s 46 largest counties due to data limitations.) Vacation homes generally represent only a small share of all housing in most counties, with the smallest shares typically found in large urban areas and the largest shares in rural mountain and coastal areas. In most areas of the state, however, the share of housing used for vacationing has grown significantly in recent years.

What Is a Vacation Home? The U.S. Census classifies as a “vacation home” a housing unit that is used primarily for seasonal, recreation, or occasional purposes. This definition of vacation homes does not capture homes that typically are used a primary residence but are rented for short periods throughout the year. 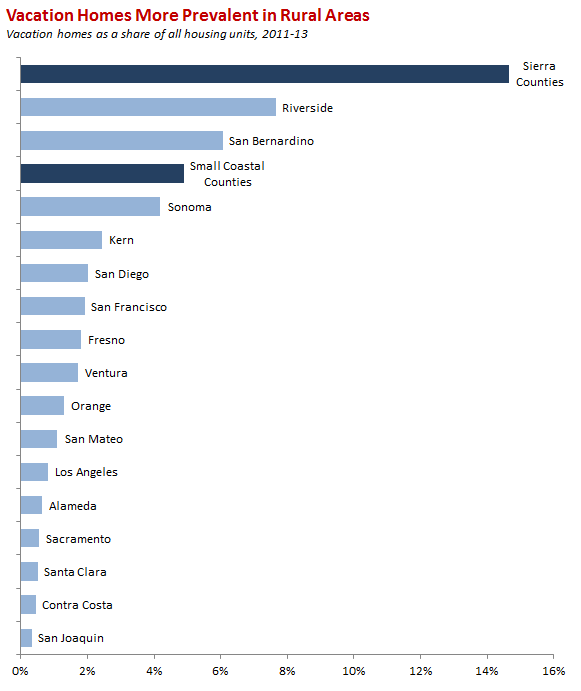 Vacation Homes Only a Small Share of Housing in Urban Areas. In three-quarters of large urban counties, less than 2 percent of the housing stock is dedicated to vacation uses. Notable exceptions are Riverside (8 percent), San Bernardino (6 percent) and Sonoma (4 percent). In contrast, as the figure above shows, vacation homes make up between 8 and 30 percent of the housing stock in smaller mountain counties (Amador, Calaveras, El Dorado, Nevada, Placer and Tuolumne) and between 3 and 8 percent in smaller coastal counties (Humboldt, Marin, Mendocino, Monterey, Napa, San Luis Obispo, Santa Barbara, and Santa Cruz). 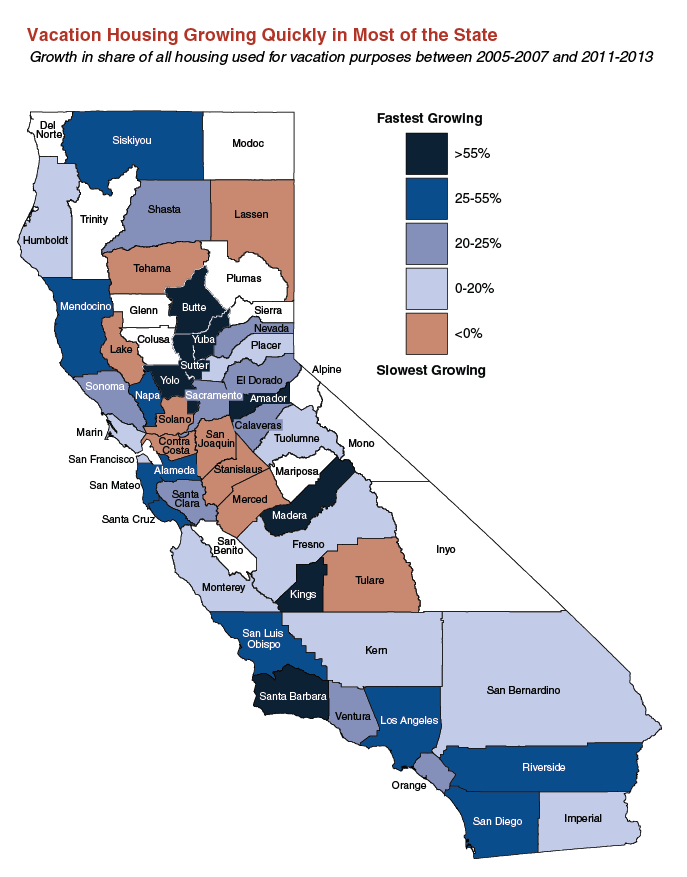 Vacation Homes Have Been Growing Faster Than Overall Housing Stock in Most Areas. Vacation homes grew faster than the overall housing stock in four-fifths of counties in recent years. As a result, about 2.5 percent of houses statewide were used for vacationing during the period 2011-2013, compared to only 2 percent between 2005-07, a 25 percent increase. In some counties, this increase was even greater.  For example, the share of housing used for vacation purposes increased by more than 50 percent in Los Angeles, Santa Barbara, and San Luis Obispo. Despite these recent increases, vacation homes continue to make up a small minority of the housing stock in most counties.

Many Factors Likely Play a Role in Growth of Vacation Homes. Several explanations have been offered for the growing popularity of vacation homes. Some have argued that websites like Airbnb have made owning and renting vacation homes easier and more profitable. Others point to improving incomes among wealthy households, an influx of foreign buyers, and a growing population of baby boomers nearing retirement. It is likely that all of these factors—and others—play a role in explaining the recent growth of vacation homes.

A subsequent post provides an update based on 2014 American Community Survey data.