California recorded 9,285 housing permits in August, up 15 percent from August 2020 but still the lowest monthly total since February. Total permits in 2021 year to date are 26 percent above the same months in 2020.

August’s total of 5,086 single family permits exceeded the recent average for the month, although it was below 2018 and 2020 and barely above 2019. Single family activity has rebounded since last spring’s pandemic-driven slump, as prices have risen sharply in most of the state. The Inland Empire, Sacramento, and Los Angeles metro areas had the most permits in that order and collectively accounted for nearly half the state total, which is the typical pattern. 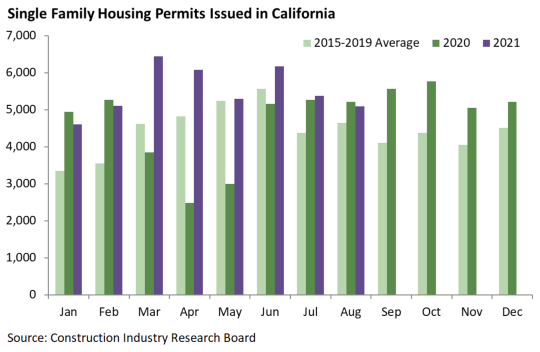 California builders recorded 4,199 multifamily permits in August, right in line with the average from 2015 to 2019. Multifamily activity has been unremarkable all year. Los Angeles County led as usual with 1,394 units followed by San Diego County with 871. San Francisco permitted 578 units, its most since January 2019. 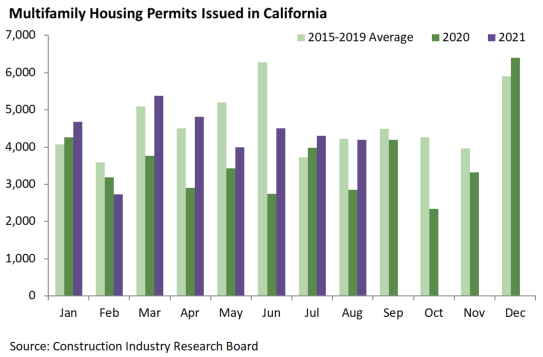 Nonresidential construction permit activity remains very weak. August’s total of $1.235 billion was barely half the recent average for the month. The ‘other nonresidential’ category was the bright spot as its total of $335 million was the highest since last August, led by a $144 million hospital in Healdsburg. 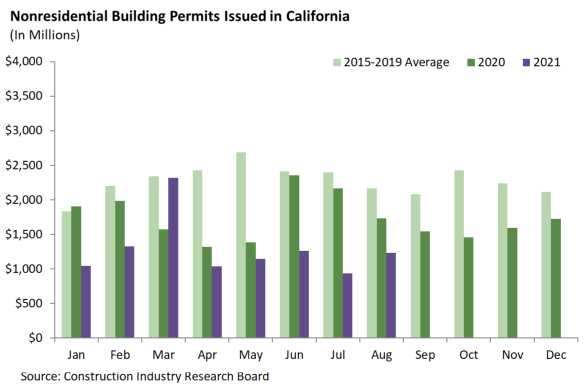