In a recent post, we noted that vacation homes are becoming more common in many parts of California. This post provides a brief update on these trends incorporating newly released data from the 2014 American Community Survey. 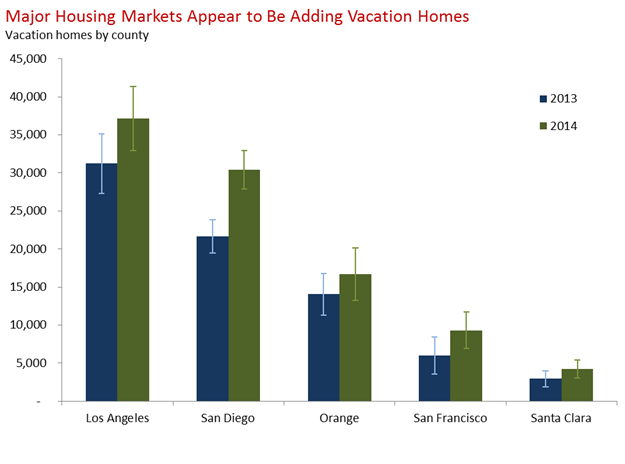 Vacation Home Growth Appears to Have Continued in 2014. The 2014 ACS data suggest that California’s major coastal counties saw a significant increase in vacation homes in 2014. Estimates of vacation homes in San Diego, San Francisco, and Santa Clara all rose by more than 40 percent compared to 2013, while Los Angeles and Orange showed increases of around 20 percent.

Some Caution Needed. Vacation homes can be difficult to measure with precision. This is reflected in the relatively large margins of error—depicted by the error bars on the graph—associated with the estimates discussed  above. These imprecisions in the data could be driving these apparent year-over-year increases in some cases. The consistency of the pattern, however, suggests that the trend toward more vacation homes in California continued in 2014.