Personal income is a key economic statistic often used to measure and track the size of the state's economy. The U.S. Bureau of Economic Analysis (BEA) defines personal income as "the income that persons receive in return for their provision of labor, land, and capital used in current production as well as other income, such as personal current transfer receipts." Our annual Fiscal Outlook estimates, including the main scenario estimates we released on November 18, consider both prospective growth of personal income, as well as the personal income tax (PIT, the state government's largest revenue source by far). 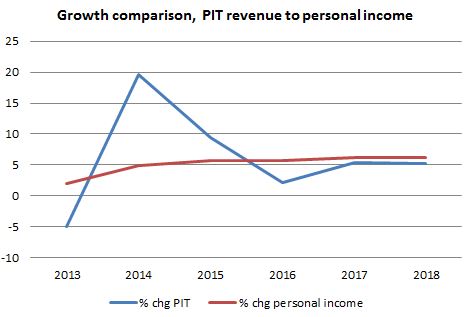 Why the Differences? The conclusions above may seem odd as the PIT is broadly conceived as a tax on personal income, but a closer examination shows big differences between the PIT base and personal income as measured by BEA. Nearly half of personal income is not subject to the PIT, and conversely nearly a fifth of the PIT base in a typical year consists of items that are not included in personal income. The following table shows a rough breakdown of these differences, using 2016 projections from our office’s Fiscal Outlook main scenario. 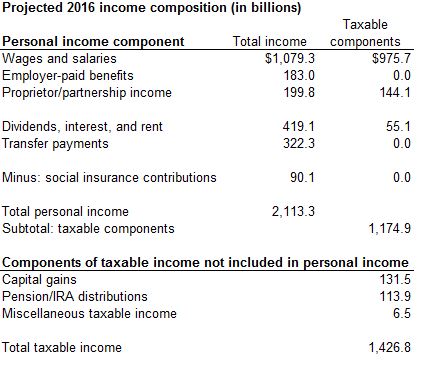 PIT Does Not Tax Significant Components of Personal Income. For each piece of personal income shown above, the taxable component (that is, the part of personal income taxed by California's PIT) is smaller than the total income in that category. In the cases of wage and salary income and business income from proprietorships and partnerships, the discrepancies likely stem to some extent from taxpayers not reporting (or not being required to report) all of their income on PIT tax returns. This occurs for various reasons. For example, some wage and salary earners have total income that is low enough so that their state tax liability is zero. In addition, underreporting of business income on tax returns is a longstanding issue at both the federal and state levels.

Employer-paid benefits include employer contributions for pensions and health insurance and the employer’s portion of the payroll tax for Social Security and Medicare. None of these items are taxable at the time the contribution is made at the federal or state levels.

Only a small fraction of capital income from dividends, interest, and rent is taxable at the state level. Personal income includes dividends and interest payments received by pension and life insurance plans which the BEA then imputes to households. As with pension contributions, payments received by these plans are not counted as income in the year they are received. Another component of personal income that is not taxable under the PIT is “imputed rent” that homeowners receive for effectively renting their own homes out to themselves.

A transfer payment is defined as a payment for which no services are performed. The largest components of transfer payments are for Social Security, Medicare, and Medicaid. Other significant components include unemployment insurance, veterans’ benefits, and food stamps. Essentially none of these items are taxable under the state PIT, although some Social Security payments are taxable at the federal level.

PIT Taxes Some Dollars Not Included in Personal Income. There two significant pieces of the PIT base that are not defined as being part of personal income. A capital gain is the difference between the selling price of an asset (stock, bond, building, etc.) and the asset’s original purchase price. Asset sales have never been included in BEA’s estimates of personal income or output. Distributions from pensions and individual retirement accounts are taxable in the year that they are withdrawn, but in effect they have already been counted as personal income once when the initial contributions were made.

PIT Elements Excluded from Personal Income Contribute to State Revenue Volatility. The differences between personal income (abbreviated as "PI" below) and the PIT base explain most of the discrepancy in annual growth rates displayed near the beginning of this post. The graph below shows the difference in our main scenario annual percentage growth rates between the PIT components included in personal income and the PIT components excluded from personal income. It looks very similar to the first graph in this blog post, as the excluded components are far more volatile. Capital gains (a key element of the PIT base excluded from personal income) contributes significantly to annual volatility in the PIT and overall state revenues. 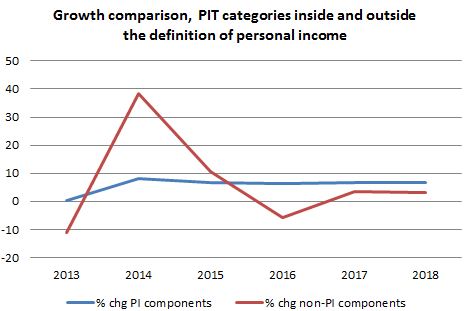