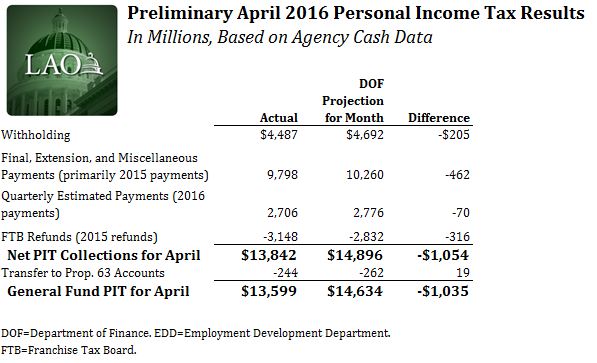 Answers to Questions About the April Totals

Are the April figures "final" now? The figures above are based on Franchise Tax Board (FTB) preliminary tallies of April collection data. In the coming weeks, further refinement and adjustments of these totals are possible. In most cases, those future changes are small.

Does a shortfall in April revenues mean that 2015-16 General Fund revenues will be lower by the amount of the shortfall? No, it does not. April is an important month for revenues, but each fiscal year's revenue projections consider broader economic trends and how they affect revenues in other months as well, including the key PIT collection month of June. Moreover, fiscal year budgetary revenues are affected by the complex state revenue accrual system. All told, we will have to wait until mid-May—when both our office and the administration release new revenue projections—to get a beginning sense of how 2015-16 revenues are affected. Precise information on each year's tax returns takes many months to compile. 2015-16 revenue estimates will continue to evolve based on updated data and accrual estimates over the next two years or so.

Does a shortfall in April revenues mean there is a big state budget deficit? No, not necessarily. First, as we have discussed in recent years, California's budget is in a stronger position than it was in years past, with reserves and other features present that allow it to withstand revenue shortfalls of this type. Second, declines in revenues—be they declines in "current-year" estimates (for 2015-16) or "budget year" estimates (for 2016-17)—trigger adjustments in state budget calculations. For example, in some fiscal years, a reduced revenue estimate results in lower minimum school funding requirements under Proposition 98, as well as declines in required reserves and debt payments under Proposition 2 (2012). (We discussed how sensitive the 2014-15, 2015-16, and 2016-17 Proposition 98 guarantees might be to changes in revenue estimates in our Proposition 98 analysis in February. See page 22 of that publication.) Third, May Revision budget estimates will take into account changing estimates of state costs since January, including departmental cost decreases and increases, estimates concerning the recently passed managed care organization (MCO) tax, new state employee labor agreements proposed by the administration, and the multiyear legislation to increase the state's minimum wage. Moreover, the May Revision estimates also will consider new data affecting 2014-15 and prior-year revenues, as well as how updated 2015-16 projections and the economic situation affect estimated 2016-17 revenues.

Finally, it is important to keep in mind that the Governor's January budget proposal included discretionary reserve deposits and one-time infrastructure spending proposals. If there is a decline in projected revenues or a projected increase in other state spending, the Governor and the Legislature may consider whether to keep discretionary items like these in the budget. In other words, all other things being equal, keeping the extra reserve deposits and one-time infrastructure spending in the budget could become more difficult if there is a revenue shortfall.

Is this kind of revenue shortfall unusual? Not at all. California's PIT is quite volatile, as are corporate taxes and some other state revenues. In January, we observed the following: "By May, normal stock market volatility and relatively modest changes in the direction of the economy and tax collections could easily increase or decrease 2015-16 revenue estimates by a billion or two, and similarly, 2016-17 revenue estimates could easily go up or down by $3 billion or $4 billion." As recently as 2012, April revenue collections fell well short of administration monthly estimates.

Below is the updated daily tally of PIT collections and refunds. 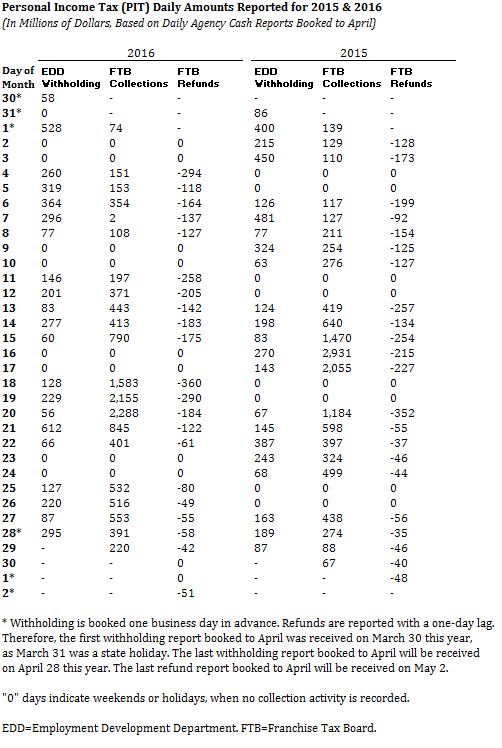 The figure below compares April 2016 PIT collections to those of April 2015. 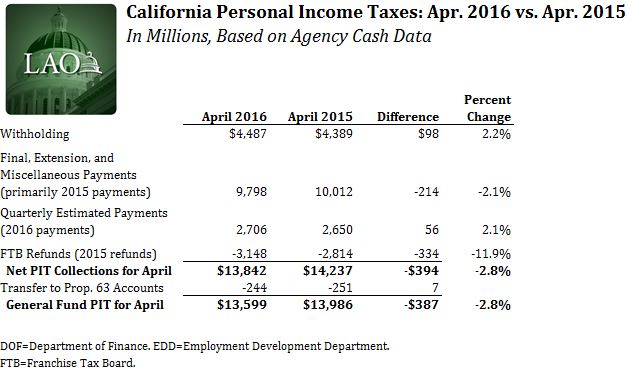