We are tracking California's April personal income tax (PIT) collections daily here on this blog and @LAOEconTax. April typically is the biggest month of the year for PIT collections, with some of the largest daily collection totals of the entire year.

Today, April 18, is "tax day," the day when most 2015 PIT payments are due to federal and state tax authorities and when certain California taxpayers must make their first quarterly "estimated payments" on 2016 income. 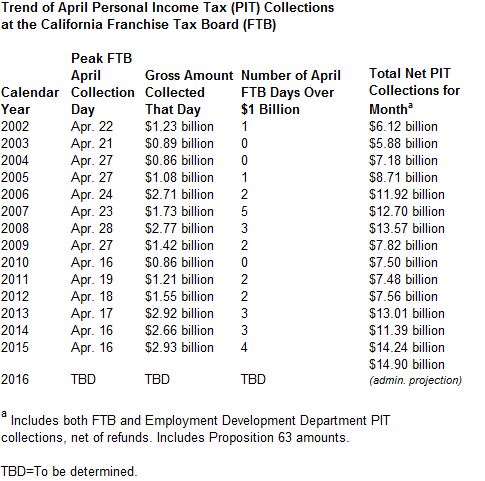 The figure above also reflects the decided transition in recent years to electronic payments by taxpayers to FTB, as well as processing improvements at the tax agency. During the 2000s, the peak FTB collection day tended to be several days after April 15. More recently, the peak collection day has tended to be much closer to the PIT return date.

In 2011 and this year, the tax deadline was extended to April 18, and in 2012, it was April 17 due to the District of Columbia's Emancipation Day legal holiday. (April 15 is on a weekend both in 2017 and 2018, which, combined with the Emancipation Day holiday, is expected to result in later "tax day" deadlines over the next couple of years too.) When tax day is April 17 or April 18, the peak collection day typically has been the business day after the tax day deadline.