April is the most important month for collections of the personal income tax (PIT), California's largest state government revenue source, as well as a significant month for corporation tax (CT) payments. Based on preliminary tax agency data, combined collections of California's "Big Three" General Fund taxes (PIT, sales taxes, and CT) fell $934 million short of the administration's projections for the month of April alone. This essentially wipes out prior months' gains, leaving Big Three collections $136 million (0.1%) below projections for the 2016-17 fiscal year to date.

April Results Negate Revenue Gains Made Earlier This Fiscal Year. For the Big Three taxes combined, the state ended March $780 million above the administration’s 2016-17 year-to-date projections, as shown in Figure 1. Preliminary data, however, indicate that Big Three tax collections fell $934 million short of the administration's monthly projection in April. Accordingly, the April result wiped out the positive revenue results observed through March. (The table at the end of this post details the preliminary April results.) 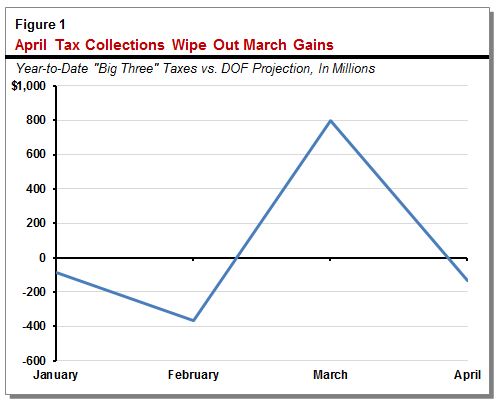 Good News: PIT Withholding. Withholding from paychecks was strong in April, totaling $4.8 billion. This preliminary number exceeded the administration’s projection for the month by $418 million (9.6%). This result builds on withholding gains made earlier in the fiscal year. Specifically, through the first 10 months of 2016-17 combined, collections from withholding now exceed the administration's January projections by $560 million (1.2%). Compared to the same 10 months in 2015-16, PIT withholding for 2016-17 to date is up by $3.3 billion (7.3%).

Bad News: Other PIT Collections. April FTB collections, however, fell short of the administration's monthly projections by $922 million (7.7%), based on preliminary data. This was the combination of a $650 million shortfall in final payments on 2016 tax liabilities, as well as a $271 million shortfall in extension and other payments, which generally relate to 2016 tax liabilities. Quarterly estimated payments on taxpayers' 2017 tax liabilities, on the other hand, came in right on the administration's monthly target. Compared with receipts from April 2016, there was essentially no year-over-year growth in estimated and extension payments received in April. Notably, however, final payments in April 2017 were down 11.8% from April 2016. In addition, as shown below, FTB processed $3.4 billion of PIT refund claims during April, or 4% more than projected. 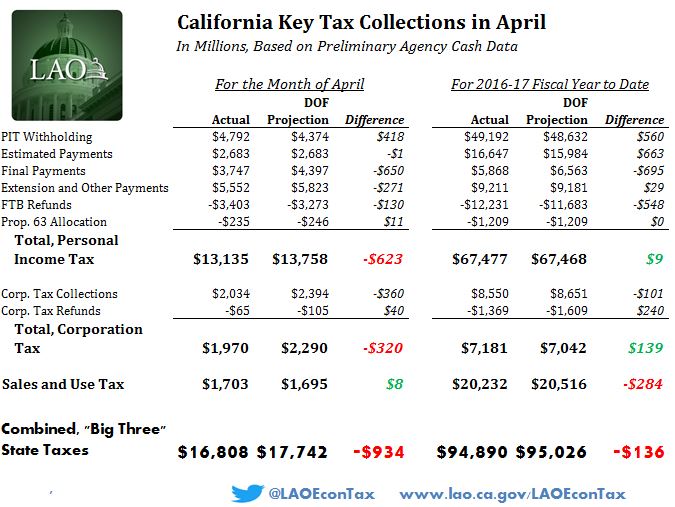