Updated: July 12, 2017. Income and sales tax updates for June, plus information on other General Fund revenue sources, will be included in the Department of Finance Finance Bulletin later this month here.

As we first noted in mid-June, California's June income tax collections were below expectations. This, however, could be good news for 2017-18 state revenue collections, as we discuss below.

Figure 1 shows that, with the preliminary June results included, "Big Three" General Fund taxes ended 2016-17 a combined $183 million (0.15%) below the projections incorporated into the just-passed 2017-18 Budget Act. (These "agency cash" figures do not account for accruals and other adjustments, which will be added to the 2016-17 revenue results over the next few years as additional information emerges.) The personal income tax (PIT) and the corporation tax were below budget projections, while the sales tax ended 2016-17 above projections. Because PIT makes up more than two-thirds of state General Fund revenues, that tax is the focus of most of this post. 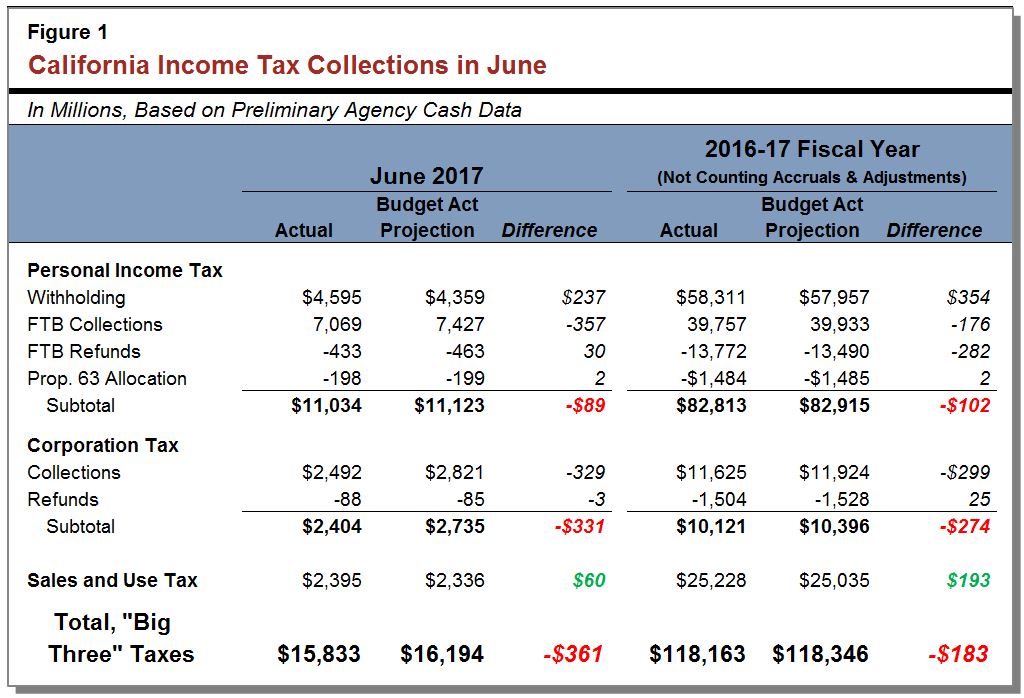 June PIT Results at FTB Short of Projections. June is a major state tax collection month, especially for personal and corporate income taxes. For the PIT, second-quarter "estimated payments" by high-income filers and business owners were due to the Franchise Tax Board (FTB) on June 15. The recently approved state budget plan for 2017-18, based on the administration's May 2017 revenue estimates, anticipated that gross PIT collections by the FTB in June 2017 (excluding PIT withholding) would be up 8.1% ($555 million) compared to June 2016. Based on preliminary data, however, gross PIT collections by the FTB actually were up only 2.9% ($198 million) compared to last June. Accordingly, PIT collections at FTB were $357 million below projections for the month of June.

Stock Market Up, Economy Still Growing. It is not unusual for June PIT and corporation tax collections to differ substantially from projections, as we noted recently. Nevertheless, the fact that June PIT collections at FTB were up only slightly from last year is striking. The S&P 500 index, after all, was up 15.5% from last year, as of the end of June. Moreover, PIT withholding continues to be above last year's levels. This and other data suggest that the pace of economic growth in California remains good, though slowing from the pace of recent years, as we expected.

Income and Tax "Deferrals" May Be Much Greater Than Anticipated. As we noted in early June, high-income taxpayers may be deferring income and/or tax payments to late 2017 or even 2018 in anticipation of a federal tax cut. Rating agencies and others have observed that this phenomenon is occurring in other states. The June FTB PIT collection data suggests this may be occurring to a much greater extent than we have anticipated. (Our most recent 2016-17 PIT projections were higher than the administration's, while our 2017-18 PIT projections were similar. Our office's next revenue projections will be released in November.)

Could Be Good News for 2017-18 Revenues. If income and tax deferrals are happening in this manner, it most likely will result in lower 2016-17 revenues (after accruals and other adjustments are considered), but also could result in increased 2017-18 revenues. In other words, as high-income tax filers eventually take gains from investments and businesses and make delayed tax payments, these eventually would show up in state revenue collections. These changes, if they occur, also would affect Proposition 98 and Proposition 2 calculations in the next state budget, due to be presented by the Governor to the Legislature in January 2018.

Accruals Will Affect 2016-17 Revenue Totals Reported in the Future. The data shown above in Figure 1 represents the best count available of income and sales taxes actually collected during the 2016-17 fiscal year. The amount of these taxes booked to 2016-17 for budgetary purposes, however, differs from the amount collected due to an array of complex and confusing accruals and other adjustments. These adjustments will emerge slowly over the next two years and could affect 2016-17 budgetary amounts eventually...either positively or negatively...by hundreds of millions of dollars or even up to a few billion dollars in the most extreme instances.