For many years, more people have been leaving California for other states than have been moving here. According to data from the American Community Survey, from 2007 to 2016, about 5 million people moved to California from other states, while about 6 million left California. On net, the state lost 1 million residents to domestic migration—about 2.5 percent of its total population. These population losses are low in historical terms. The graph below shows data from the Internal Revenue Service on the movement of income tax filers in and out of California since 1990. (Data on tax filers does not cover the entire population because some people do not earn enough income to necessitate filing taxes.) As the graph shows, net out-migration from 1990 to 2006 was, on average, more than double what is was in the most recent ten years. 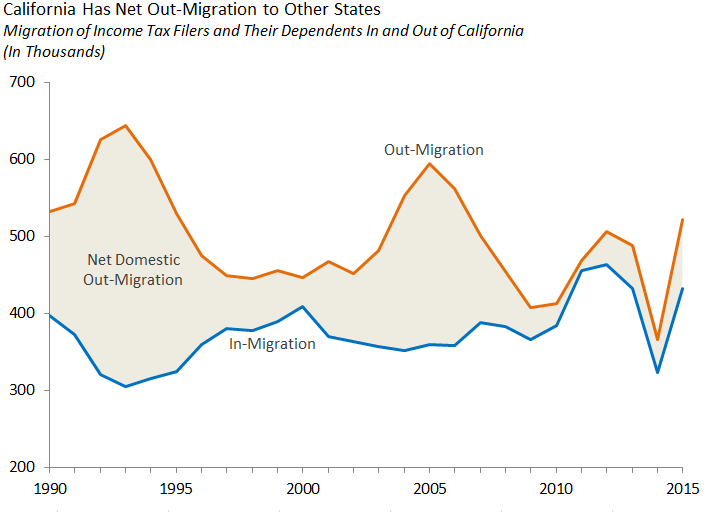 Although California generally has been losing residents to the rest of the country, movement between California and some states deviates from this pattern. The figure below shows net migration between California and individual states between 2007 and 2016. California gained, on net, residents from about one-third of states, led by New York, Illinois, and New Jersey. On the flip side, top destinations for those leaving California were Texas, Arizona, Nevada, and Oregon. 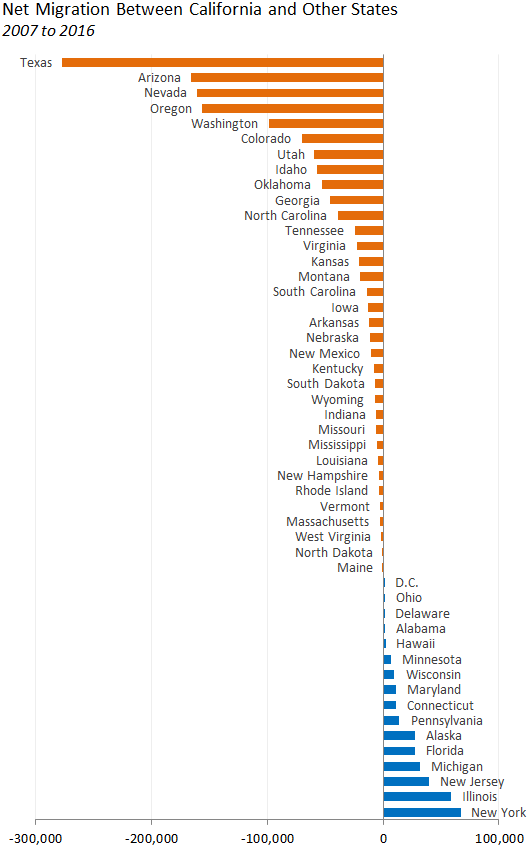 Migration among certain demographic groups also differs from the state’s general pattern. Although California has had net out-migration among most demographic groups, it has gained among those with higher incomes ($110,000 per year or more) and higher levels of education (graduate degrees). This can be seen in the three graphics below, which display migration between California and other states broken out by income, age, and education. Orange indicates net out-migration from California to the other state, while blue indicates net in-migration to California. Brighter colors indicate higher amounts of migration.

Families with kids and those with only a high school education predominate among those moving from California to its top destination states (Texas, Arizona, and Nevada). College-educated 18 to 35 year olds led the way among those moving to California from its top feeder states (New York, Illinois, and New Jersey).