Fewer Births in California Every Year Since 2015. Figure 1 below displays the annual number of babies born in California from 2001 through 2020. (The raw data are publicly available here.) Patterns during this period include: 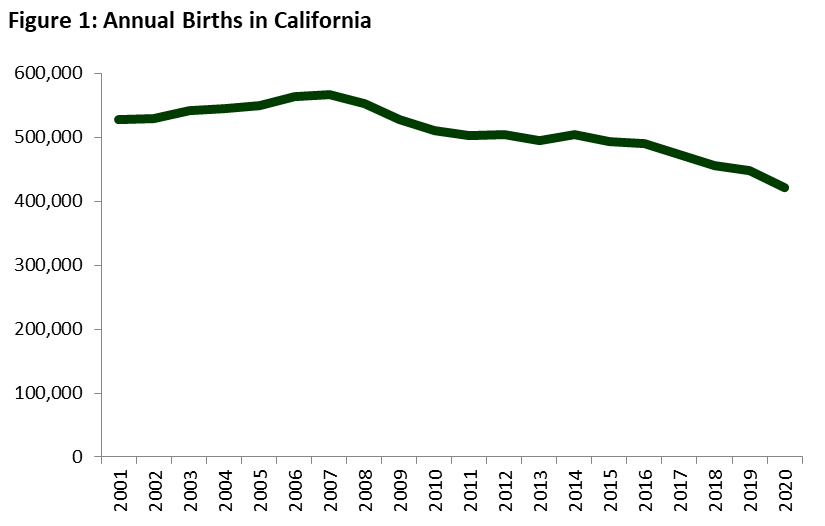 Why Would Births Drop Faster In 2020? The large drop in births from 2019 to 2020 could have occurred for a variety of reasons. Broadly, these potential explanations include:

Births Reached Very Low Levels in Late 2020 and Early 2021... Figure 2 below displays year-over-year changes in births in each two-month period from January 2020 through June 2021. For example, the number for the first two months of 2020 is -3%, indicating that there were 3% fewer births in those months than in the first two months of 2019. The biggest declines shown in the Figure occurred in late 2020 and early 2021. The timing of these declines suggests that California’s COVID-19 emergency—which escalated in March 2020, 8 to 11 months earlier—might have reduced conceptions substantially, consistent with the first explanation listed above (effects of COVID-19 on conceptions). Both the year-over-year decline and the decline relative to the pre-pandemic baseline in 2019 were much smaller in March-June 2021 than in January-February 2021, suggesting that this effect could be transitory. 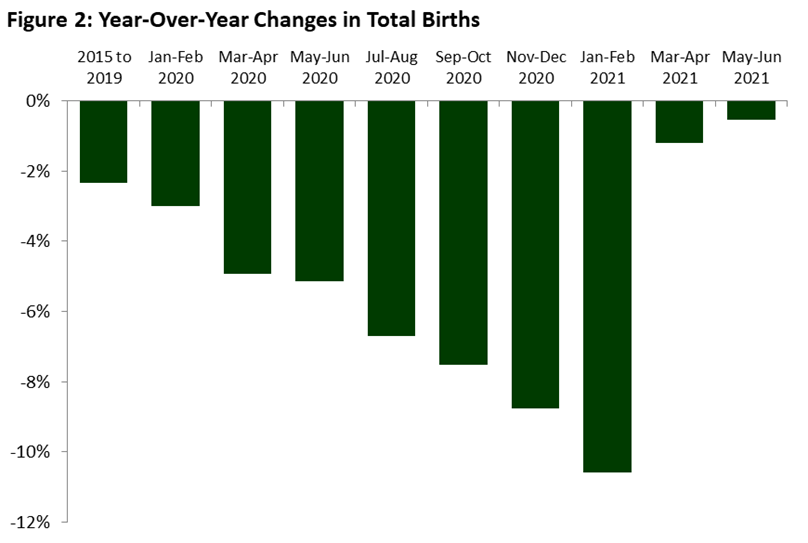 …But Large Birth Declines Started Much Earlier in 2020. If the year-over-year drop in births simply reflected a change in conceptions due to COVID-19, then large declines in the monthly birth numbers would not appear until November 2020. As shown in Figure 2, however, substantial declines already had occurred earlier in the year, suggesting that other factors explain a large part of the year-over-year drop.

Do Abortions Explain Early Fall Decline? At first glance, some of the pre-November birth declines—particularly the one in September-October—seem like they could reflect an increase in abortions, in line with the second explanation listed above (effects of COVID-19 on abortions). To investigate this possibility, we obtained monthly data on abortions provided under Medi-Cal. Ideally, we would have examined data on all abortions, but because such data are not yet available for 2020, we used Medi-Cal data as an indicator for possible broader trends. Medi-Cal covers roughly one-third of Californians, so we would not expect abortion trends in the overall population to be dramatically different from trends for Medi-Cal beneficiaries. 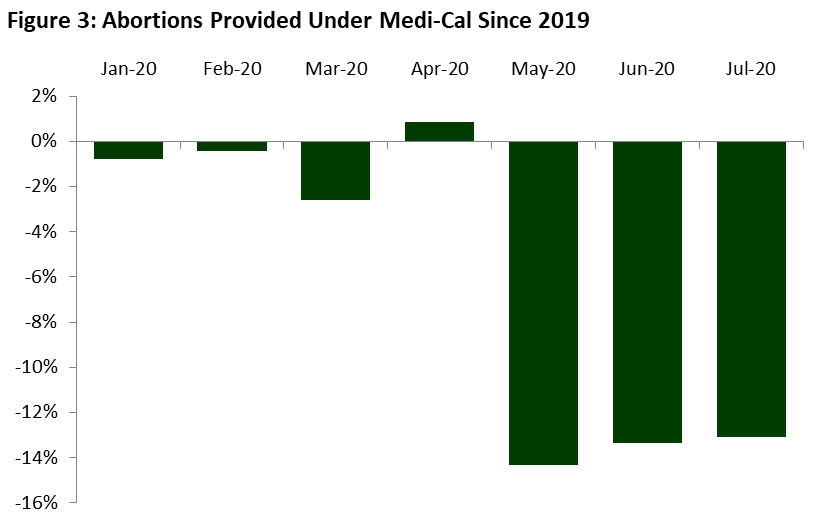 Sudden Drop in Abortions Provided Under Medi-Cal in May 2020. Figure 3 shows that abortions provided under Medi-Cal in May, June, and July 2020 were substantially lower than in 2019. Strikingly, this large decline occurred even though Medi-Cal caseloads were growing due to the economic crisis. The timing of this decline in abortions is consistent with a decline in conceptions starting in spring 2020—perhaps due, in part, to dramatic changes in social interaction during that time.

Conclusion: Likely Multiple Reasons for Birth Decline. The data presented above suggest that a drop in conceptions due to the COVID-19 emergency likely contributed substantially to the 2020 birth decline. This drop in conceptions likely stemmed from a combination of two factors: (1) choices to delay or forgo pregnancies; (2) reduced sexual activity due to dramatic changes in social interaction. That said, other factors—related or unrelated to COVID-19—also seem to have played a very important role. Although the COVID-19 emergency might have led to some abortions of existing pregnancies, this effect does not seem likely to explain a large part of the birth decline.

Why Total Births Rather Than Birth Rates? In this post, we have focused on total births in California, rather than birth rates. A birth rate is the number of births divided by the number of women within a specified age range. To our knowledge, reliable age-specific population estimates are not available at a monthly frequency, making a monthly birth rate analysis infeasible. Due to our focus on total births, potential explanations for the observed patterns include not just changes in fertility-related behavior, but also flows of adults into and out of California.