California's Economy is Globally Connected. International trade is important to California's economy. As shown in the figure below, our largest trading partners include Mexico, China, Japan, and many European nations. Over the past several months, the near-term economic outlook for many of these countries has considerably worsened. This may affect California in various ways over the coming year. 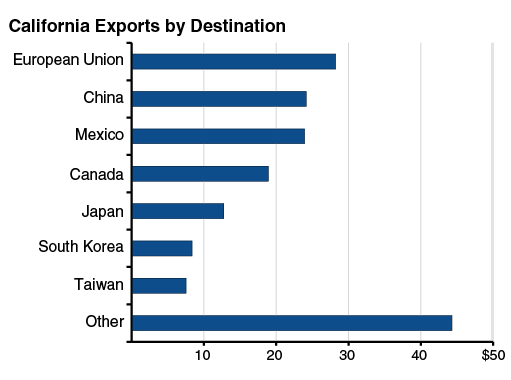 Strong U.S. Dollar Reflects Economic Health, Affects International Trade. The U.S. economy, in contrast, is relatively healthy. The relative weakness in economies elsewhere in the world has caused the U.S. dollar to appreciate significantly over the past several months in global currency markets. As illustrated below, the exchange rate between the U.S. dollar and the euro has strengthened by 15 percent since July 2014 (meaning that a dollar can buy 15 percent more euros today than six months ago). On the one hand, a stronger U.S. dollar means that California households may benefit from lower cost imports. On the other hand, California exports are more expensive for consumers in other nations than they were before. 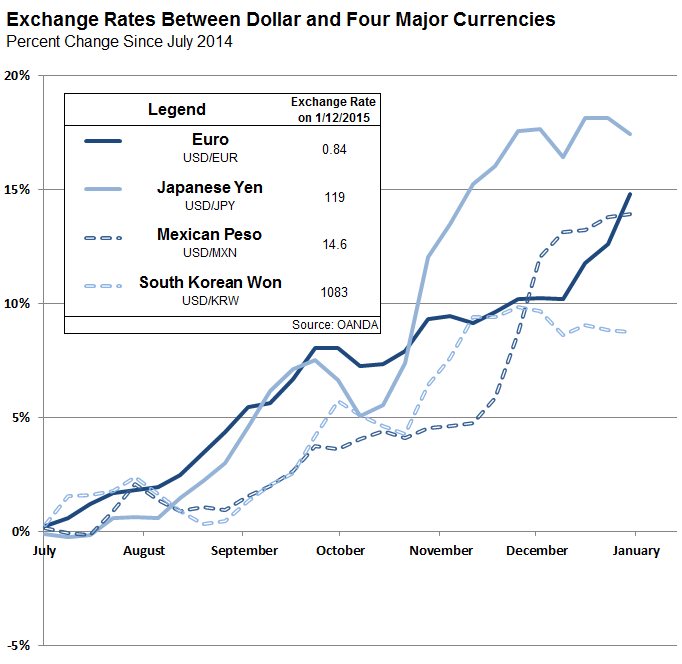 Demand For California Exports May Fall. Mexico's economy is affected by falling oil prices and inflationary pressures. China's economy also is a concern given inflated asset "bubbles" there and other economic imbalances. Japan was in recession last year, although it is expected to return to growth in 2015. The most significant economic slump recently, however, is in the Eurozone. Political turmoil and falling oil prices have led to falling consumer prices. Prolonged deflation in Europe could stress credit markets and further dampen already weak economic growth. The sagging global economy could be accompanied by falling incomes and rising unemployment in many of our most significant trading partners. These factors, along with higher import prices, may reduce consumer demand for California exports.

Recent International Trade Data Also Reflects Seaport Delays. It may be too soon to see the impacts of some of the recent economic issues in California trade statistics. As of early January 2015, the most recent international trade data is from November 2014. This is prior to the worst of the recent economic concerns materializing abroad. In addition, ongoing labor disputes at California seaports have led to delays and congestion which are likely affecting the international trade statistics.