This post discusses the state’s economic outlook over the next couple of years, including the administration’s assessment of the near-term economic outlook in the May Revision. (Based on an economic scenario described below, our office will release our independent assessment of near-term state budget revenues tomorrow. Separately, we will release our assessments of state expenditure estimates, the overall condition of the state budget, and various administration proposals via our May Revision analysis page over the next few days.)

Background on Economic Assumptions and State Budgeting. Each California state budget is premised on assumptions about the course of the U.S. and state economies. Economic assumptions, including those about the future trend in stock prices, must be made in order to develop the constitutionally required estimate of General Fund resources (revenues) in the annual state budget. In addition, both the administration and our office develop “multiyear” estimates of the state budget’s condition, each of which is premised on assumptions about what will happen in the economy over the next several years. Neither our office nor the administration can predict what will happen in the economy and the stock market over the next several years, so each of these economic scenarios should be regarded as just one possible outcome out of many. Periods of economic recession, stagnation, or faster economic growth also are possible over the multiyear period. 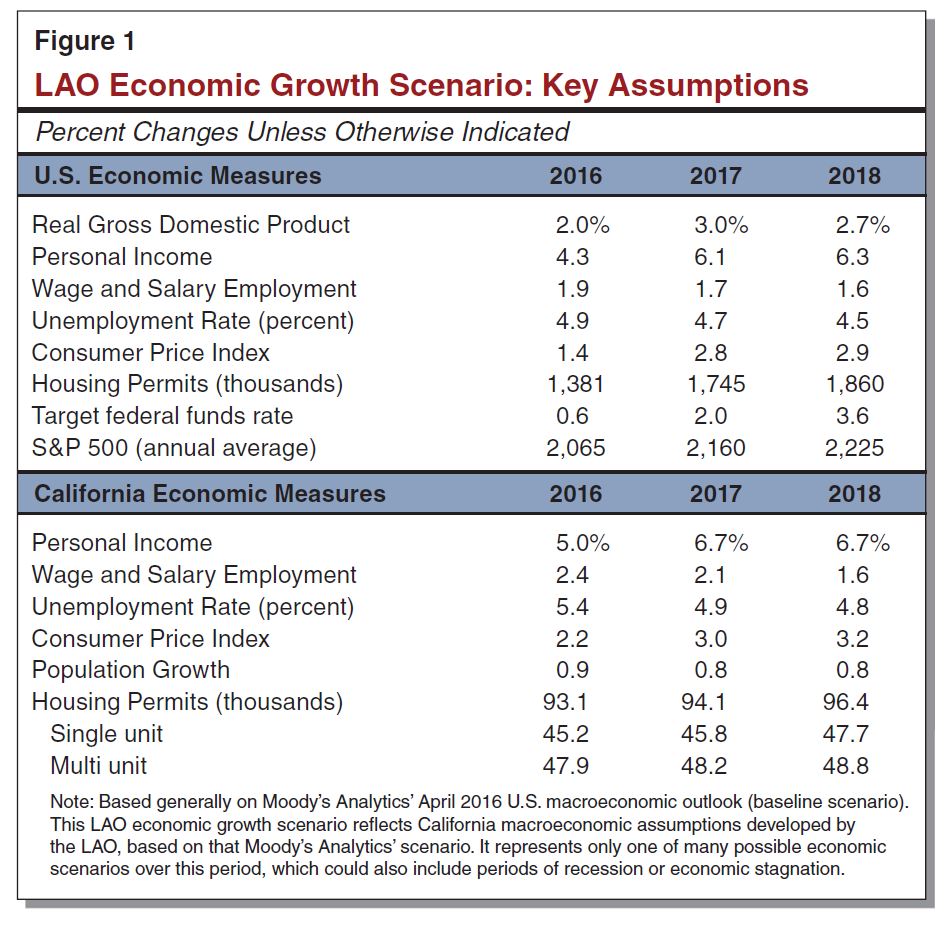 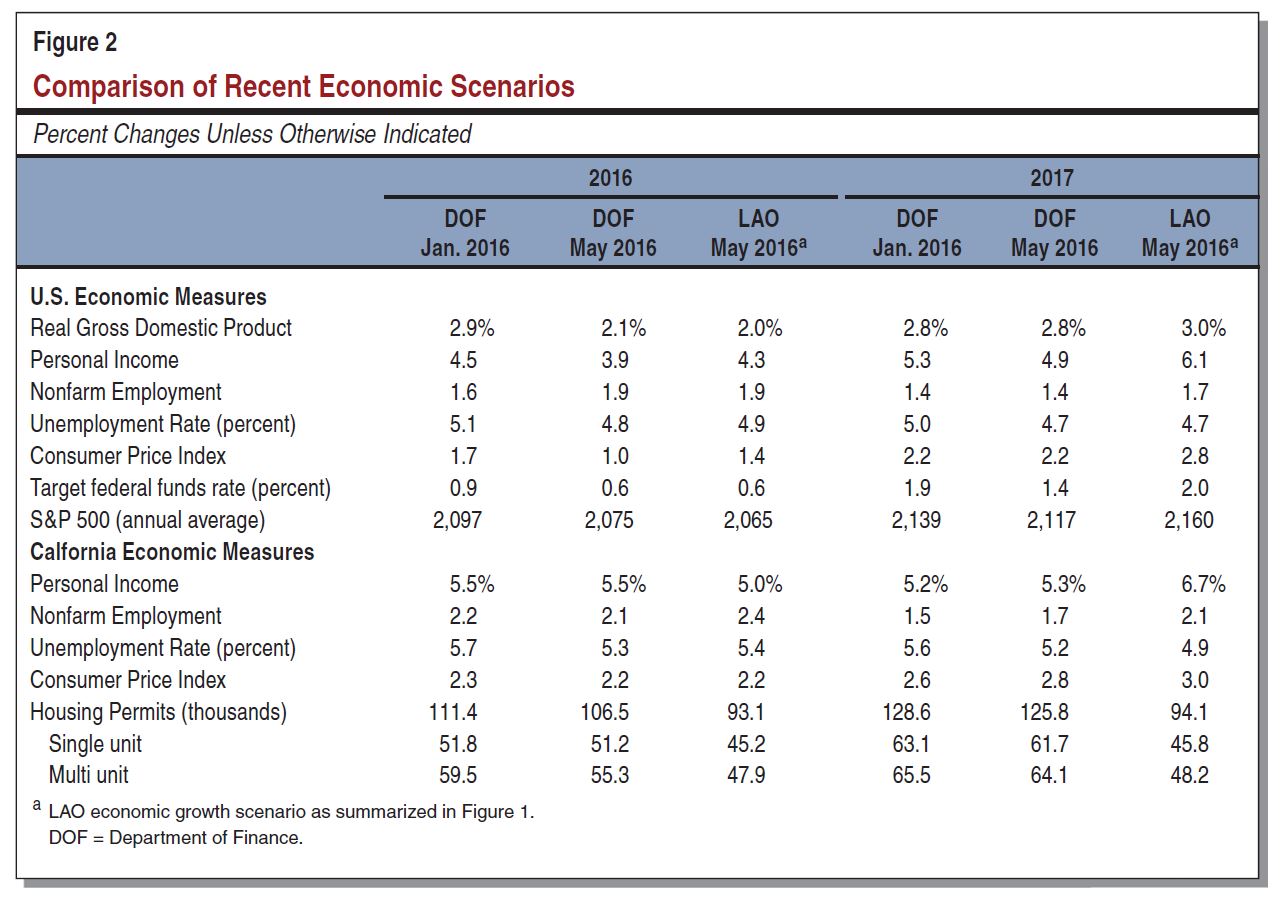 LAO Scenario: Faster Wage, Price Growth Beginning in 2017. As shown in Figure 2, the LAO’s economic growth scenario assumes somewhat more robust growth in personal income (including wages), inflation, and employment in 2017. (In 2018—not displayed in Figure 2—the differences between the administration and LAO scenario assumptions about U.S. personal income, inflation, and job growth become even larger.)

Different Economic Data Providers. The differences described above appear to stem in part from the fact that we and the administration contract with different national economic analysis firms to help develop our U.S. economic scenarios. Currently, these analytical firms have different views about what is likely to happen in the economy over the next few years. (Most states use national economic analysis firms in the same fashion. For more information, see Exhibit 5, page 18, of this 2011 report from the Pew Center on the States.)

Both our office’s contracted economics firm (Moody’s Analytics) and the administration’s believe that U.S. unemployment rates are likely to fall below 5.0 percent—a level approaching “full employment”—over the next few years. Moody’s Analytics, however, believes that higher employment is likely to tighten labor markets and increase prices and wages more than reflected in the administration’s U.S. economic scenario—especially in 2017 and 2018. The administration’s economic scenario, by contrast, assumes these same general trends with more modest levels of price and wage growth as the economy approaches full employment. The administration’s scenario is at least somewhat consistent with skepticism among many economists that wage growth and inflation will pick up in a consistent fashion anytime soon.

Both Scenarios Are Plausible. While the two economic scenarios are different in some respects, their general outlook is very similar—a continuation of the current long economic expansion. Economic expansions do not end from “old age” alone but rather from economic imbalances and economic rigidities that develop over time or, in some cases, major economic shocks. There are few signs of such imbalances or shocks in the U.S. economy now, as job growth continues and wage growth has picked up. Economists surveyed recently by the Wall Street Journal estimated, on average, only a 20 percent chance of the U.S. falling into recession in the next year. Over the next year or two, our outlook is similar: that continued economic expansion seems most likely. Even so, the differences between the LAO and administration scenarios show that there is uncertainty about just how fast economic growth could be over the next few years. There are arguments to be made in support of either economic scenario’s assumptions, meaning that inflation, employment, and wages could grow at either the level assumed by the administration or the level in the LAO economic growth scenario. In our view, either economic growth scenario is plausible over the next few years.

Risks to the Economic Outlook

Risks Discussed in Earlier Report. In our November 2015 report, California’s Fiscal Outlook, we discussed the current, mature economic expansion, as well as various risks for the economy, most of which remain as either short-term or long-term risks for California. Global financial markets have calmed after a terrible start to 2016 (which likely contributed to California’s April revenue shortfall). Nevertheless, the economy in much of the rest of the world remains weak. As we discussed in November, growth in China continues to decelerate—gradually, so far. Another uncertainty that remains is about how the Federal Reserve’s slow increases in its interest rates will affect the U.S. and world economies.

Below, we highlight some additional risks to the economy based on our observations and data received since November.

Weak Productivity. Productivity is very important to economic growth, but it is difficult to measure. According to some statistics, productivity growth has been very weak in recent years. For example, nonfarm business “output per hour” fell 1 percent (annualized change) during the first three months of this year. There are various theories about what is happening with productivity. According to some, recent weakness in productivity growth reflects widespread adoption of earlier technological innovations by employers, such that there is little room to boost output with more technological investment or other management changes. Capital spending by businesses also has been weak in recent years. The LAO economic growth scenario assumes that output per hour improves notably from its recent performance, growing consistently by about 1 percent or greater in the coming years. If this does not occur, economic growth may well be weaker than assumed by most analysts, including ourselves.

Federal Government. Our office’s economic and budget outlooks assume no significant changes in federal policy over the next few years. Moreover, we assume no noteworthy shocks to consumer, business, or investor sentiment related to the federal government, such as those that occurred in 2011 during the stalemate about an increase in the U.S. government’s “debt ceiling.” As we noted in November, this year’s election of a new president and Congress means that some changes to the economy are possible over the next few years. Policy or other changes concerning the federal government could alter the economic outlook, either positively or negatively.

Bay Area and Housing. The state’s economy and budget continue to rely on the economic health of the San Francisco-Oakland and San Jose metropolitan regions—anchored by the technology industry—where home prices and rents have grown markedly in recent years. With their relatively high incomes, Bay Area taxpayers, on average, pay considerably more in personal income taxes to the state than taxpayers elsewhere in California. Our economic growth scenario is consistent with a slowdown in Bay Area job and home price growth. We also reflect a recent slowdown in venture capital funding of Bay Area technology firms and assume modest growth of such funding in future years. If, however, the growth of jobs, home prices, or other elements of the Bay Area economy stagnates—or worse—the state’s economic outlook could change considerably.

Minimum Wage. The Legislature and the Governor approved legislation to increase the statewide minimum wage for large and medium-sized employers to $15 per hour by 2022 (and for employers with 25 employees or less one year later), subject to possible delays due, for example, to an economic downturn. Roughly one-third of California’s workers—5 to 6 million people—made less than $13 per hour in 2015 (an amount, adjusted for inflation, that may be roughly comparable to $15 in the early 2020s). These workers most commonly work in jobs that involve sales, food preparation and service, administrative support, personal care and services, and transportation and moving. Furthermore, workers in inland California tend to receive lower pay than workers in the state’s coastal areas. For example, wages for the average worker in San Jose are notably higher than wages for the average worker in Fresno. As a result of all these factors, workers in certain industries and certain regions of the state are likely to experience significant changes due to the gradual increase in the minimum wage over the next few years.

Both the administration’s and our office's economic scenarios now reflect various assumptions about how the minimum wage will affect the economy. For our part, we note that our assumptions in this regard are very rough, and they will evolve over time. In general, we now assume that (1) higher wages will lead many low-wage workers to spend more money in the economy, (2) businesses will pass some higher wage costs to consumers by raising prices, and (3) job growth for the lowest-wage workers will slow to some extent as the costs of employing them rise.