In recent days, stock markets around the world experienced a noteworthy decline. Earlier this week, some major U.S. stock indices experienced what is known as a "correction," often defined as a drop of at least 10% from a recent high. Markets in the U.S. since have recovered around half of their losses of recent days. Below, we answer some questions about California's finances and the stock market.

How Do Stocks Affect California's State Budget? When people hear of a California state budget surplus or deficit, they typically are hearing about California's General Fund, the state's main operating account (with budgeted revenues of around $115 billion in 2015-16). The General Fund makes state payments for schools and community colleges, public universities, major health and social services programs such as Medi-Cal, and prisons.

As discussed here, California's personal income tax, which makes up around two-thirds of General Fund revenue, is more volatile than the economy. This is partly because California taxes capital gains, which are especially volatile and mainly go to high-income taxpayers who pay the highest tax rates. Capital gains include gains on stock trades, as well as certain gains on sales of other assets like houses. While personal income taxes on capital gains make up a small portion of overall General Fund revenues (10% of total General Fund tax revenues, according to the 2015-16 budget estimate required by Proposition 2), this part of the state's revenue stream is volatile and difficult to predict due largely to the difficulty in predicting stock market surges and declines. Increases or decreases in personal income taxes on capital gains can cause state revenues to be hundreds of millions or even billions of dollars above or below annual budget estimates.

How Did California's Finances Become So Tied to the Stock Market? The personal income tax has grown over time as a percentage of General Fund revenues. It now makes up about two-thirds of those revenues. California's state finances have become more closely tied to the stock market as a result of (1) this growth of the personal income tax, (2) the increased share of personal income taxes paid by the highest-income Californians, whose incomes consist largely of taxable, stock-related capital gains, and (3) the decreased significance over time of the other two large General Fund revenue sources: the sales and use tax and the corporation tax.

Various factors have contributed to higher-income Californians paying a greater share of the personal income tax over time. These include the passage of Proposition 30 in 2012 and other tax policy actions. In addition, real incomes of the top 20% of tax filers, those paying the highest marginal tax rates, have grown faster than the real incomes of the bottom 80% of tax filers. Note that while increased reliance on high-income Californians' tax payments has increased the volatility of the state budget, it has also boosted average annual state revenue growth over many periods. As we noted in a 2005 report on state revenue volatility, a reduction in the "progressivity" of personal income tax rates—such as lower marginal income tax rates for upper-income Californians—could significantly reduce long-term average annual revenue growth for the state.

The share of the General Fund supported by the sales tax and the corporation tax has declined over time. Sales taxes have grown less robustly over time largely due to slow price growth for taxable (physical) goods, as we described in a 2013 report. This slow price growth for taxable goods has contributed to consumers spending more of their income on services, which generally are not taxable under California's sales tax. In addition, volatile corporate taxes have declined in recent decades as a share of profits due largely to state tax policy changes of recent decades, as we described in 2014.

The Governor's revenue estimate assumed that accrued personal income taxes grew by 3.1% in 2015-16 to reach $77.7 billion. This 3.1% growth estimate, however, likely understated 2014-15 revenues, agency cash collections of which were over $700 million higher. (Nearly all of any 2014-15 revenue gain is expected to be spent on schools, pursuant to Proposition 98.) The 2014-15 agency cash collection figures do not yet reflect various accrual changes and adjustments that will become evident over the next three years as books close on that fiscal year. Assuming, however, that 2014-15 personal income taxes ended about $600 million above the Governor's budget estimates, this means the budget plan effectively assumes that personal income taxes for 2015-16 grow by only 2.2% above the assumed 2014-15 levels.

To put this figure in perspective: since 2000, personal income tax growth has fallen below 3% in only three fiscal years: 2001-02 and 2002-03 (following the dot.com bust) and 2008-09 (during the financial crisis). If policy changes, such as tax rate increases and decreases, were omitted, another year or so may have had similarly low growth. The simple average of year-over-year personal income tax growth since 2000 has been about 5%. Accordingly, the implicit assumption built into this year's budget of over 2% personal income tax growth in 2015-16 is consistent with weak economic growth or even a small economic or stock downturn. Therefore, the budget already incorporates a significant buffer against any economic and stock market weakness that may emerge this year, even before considering the budget's estimated $4.4 billion of reserves.

What Did the LAO Assume About the Stock Market in its May Budget Outlook? Because California taxes capital gains as part of its personal income tax, every state revenue estimate—either explicitly or implicitly—reflects assumptions about the future direction of the stock market. At the LAO, we have moved in recent years to make our stock assumptions explicit in every budget outlook as there is a statistical relationship between stock index changes and taxable capital gains. In our May budget outlook, we described our stock market and capital gains assumptions here.

Our office's main budget outlook scenario in May indicated that 2015-16 revenues would be about $3 billion above the Governor's projections. Underlying that $3 billion figure was an assumption that major stock indices would be flat from May 2015 through the end of the year. Specifically, we assumed that the S&P 500 stock index would hover around the 2100 level during the current calendar quarter and the final quarter of 2015. (The administration's economic forecast assumed somewhat higher stock prices than our office's main outlook scenario, although our understanding is that the Governor's revenue projections are not directly tied to this economic forecast.) As of Friday morning, August 28, the S&P 500 index stood at around 1990, or about 6% below the level of our office's main budget scenario in May.

In May, our budget outlook noted that California clearly was "on the upward slope of the state's revenue roller coaster." But just as the state's revenue picture has improved significantly over the past year, "it can just as easily reverse course with a stock market or economic downturn," we added, commenting that "such slumps can occur with little warning." Proposition 2 aims to build a reserve to help address some of this revenue volatility. We also noted that the state limits the damage to the state budget during future downturns by "treading carefully in authorizing new spending commitments or tax reductions."

How Much Do Stock Market Declines Affect California Revenues? The state's personal income taxes on capital gains tend to climb as stock indexes increase and these taxes tend to fall when stock indexes decline, particularly when such increases and declines occur over a sustained period (not just during a particular week or trading day). Increases or decreases in stocks can contribute to hundreds of millions or even billions of dollars of higher or lower state revenues in any given year. With the S&P 500 somewhat below our office's May main scenario assumptions, personal income taxes on capital gains may fall below our office's main scenario outlook in 2015-16, particularly if stock indexes remain near their current levels over the next several weeks and months or fall further.

That being said, the state budget—built upon the Governor's modest revenue growth estimates and with growing reserves—seems to have a significant built-in buffer against such capital gains weakness, as described above. Moreover, state revenues during 2015 to date have been stronger than budget assumptions, with noteworthy strength in the part of the personal income tax (withholding) that is not as directly linked to trends in the stock market. Withholding is mainly affected by growth in wages and employment, and job growth in California has been fairly healthy recently.

Another important point is that the bulk of taxable, stock-related capital gains comes from stocks held for more than 1 year by investors. As shown in the Google chart below, the S&P 500 stock index as of Friday morning, August 28, was still above its levels of early 2014 and the years before that. Accordingly, when California taxpayers are selling stocks they have held for 18 months and more, they are still likely to realize taxable capital gains: albeit smaller gains than they would have realized before recent stock price drops. 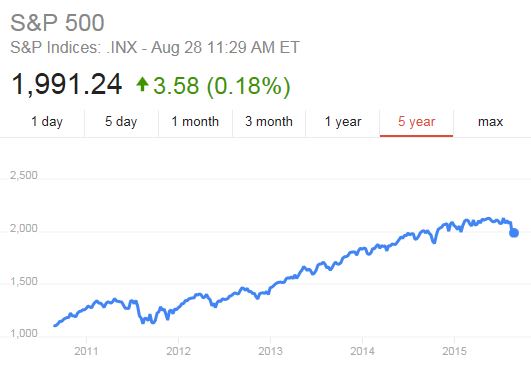 How Do Concerns About China's Economy Affect California? Past evidence shows it is difficult to pin down the precise reasons for sudden stock market drops, as a significant portion of stock selling in such instances may be prompted by the declines in stock prices themselves, which can feed further stock declines here and around the world and so on. Recently, however, concerns about the Chinese economy and the Chinese government's unusual efforts to intervene have raised investor concerns, perhaps contributing to recent stock declines.

California's economy is globally connected, and China is one significant customer for California exports. (Nevertheless, other U.S. states like Washington, Louisiana, Alaska, and Oregon are much more reliant on exports to China, according to research by Moody's Analytics.) Weaknesses in the economy of China and in emerging economies may negatively affect California exporters in various ways, in addition to economic losses related to the stock market decline itself. (We discuss the devaluation of China's currency in a recent blog post here.)

Other factors, however, should help offset some of this economic damage in the short-term. For example, if this economic weakness helps keep bond interest rates low, that could help California borrowers, including businesses. Moreover, in the short run, lower oil prices may help boost the California's economy, with lower gas prices putting more dollars in the pockets of many California consumers. (While lower oil prices may help the overall state economy in the short term, they produce negative economic effects in certain localities, particularly in oil-producing Kern County.)

When Are California Budget Outlooks Updated? Our office is scheduled to update our budget outlook in November, as usual. We anticipate that we will release budget outlooks premised on a few different economic scenarios, just as we did last year. The next budget updates from the administration are scheduled for January, when the Governor submits his initial proposed state budget plan for 2016-17.