California's Employment Development Department and the U.S. Bureau of Labor Statistics released California's August 2020 state jobs report today. Statewide nonfarm employment rose by an estimated 101,900 in August, and the July increase was revised downward from 140,400 to 83,500. The official unemployment rate was 11.4 percent, down from 13.5 percent in July but far above the estimate of 3.9 in February before the COVID-19 pandemic caused large-scale upheavals. The survey reflects job changes through the week of August 9 to August 15. California accounted for 7.4 percent of the national estimate of 1.4 million net jobs gained in August, below its 11.5 percent of the nation’s total payroll jobs as of February.

The figure below shows how employment has evolved in both the state and the nation since the start of the pandemic. Overall employment in the state as of the middle of August was 9.8 percent below the level of February, somewhat worse than the national figure of 7.6 percent. While much of the gap is attributable to the leisure and hospitality sector which includes restaurants, bars, and hotels, employment in other sectors has also recovered more slowly in the state than in the nation as a whole. 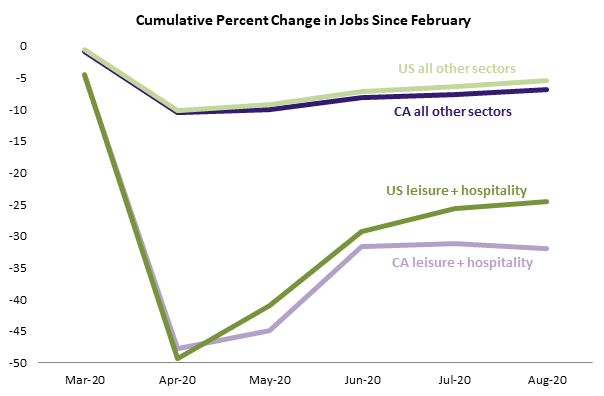 The next figure summarizes nonfarm employment by sector based on the monthly survey of employers. It shows that California’s underperformance has been concentrated in the retail trade and other services sectors in addition to leisure and hospitality. The state’s leisure and hospitality sector lost 15,000 jobs in August compared to a nationwide gain of 174,000. Excluding this sector, the state accounted for 9.7 percent of August nationwide job growth, still somewhat below its share of total jobs in February.