August 2020 data suggest that California home price growth has accelerated despite the pandemic and the recession, and that nationwide home prices are seeing a smaller surge. The average interest rate on 30-year fixed rate mortgages fell from 3.62 percent in August 2019 to 2.94 percent in August 2020. This made monthly mortgage payments more affordable (all else equal) and probably contributed to the price increases. The typical home in California has appreciated 5.5 percent since August 2019, while the national figure is 5.1 percent. 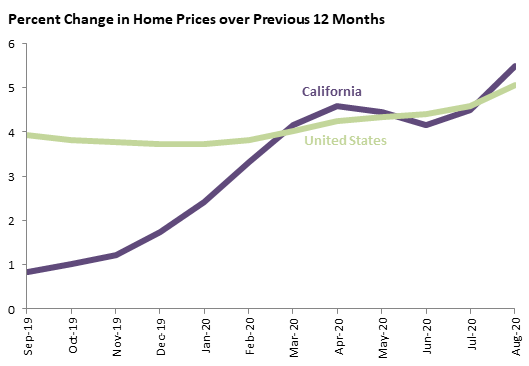 The slower home price growth that prevailed in 2018 and 2019 made a minor dent in the affordability gap between the state and the rest of the country. Housing in California has always been relatively expensive, and the gap has widened considerably since 2012. Previous recessions have had disparate effects on home prices: they were largely unaffected by the collapse of the dot-com bubble in 2001, while in the late 2000s the collapse of the housing bubble was the single biggest factor that led to the financial crisis. Early evidence suggests that the current recession has had little impact on home prices, and that if anything the affordability gap is widening again. 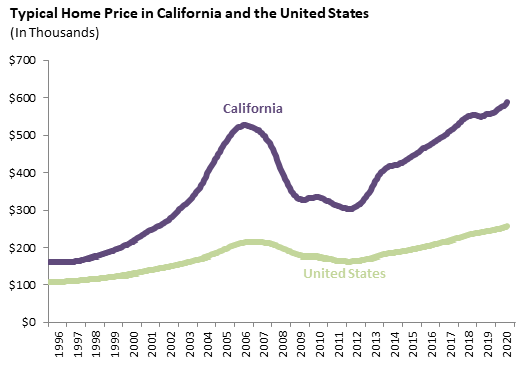 The graph below shows appreciation over the past 12 months for the state’s 15 largest counties. Santa Clara County shows by far the highest home price growth among this group, although its Bay Area neighbors Alameda, Contra Costa, San Francisco, and San Mateo have all lagged behind the state’s other large counties. The sluggishness in the expensive central Bay Area counties may be driven in part by the shift to remote work resulting from the pandemic, although it is not clear why the equally expensive Santa Clara has not seen this pattern. 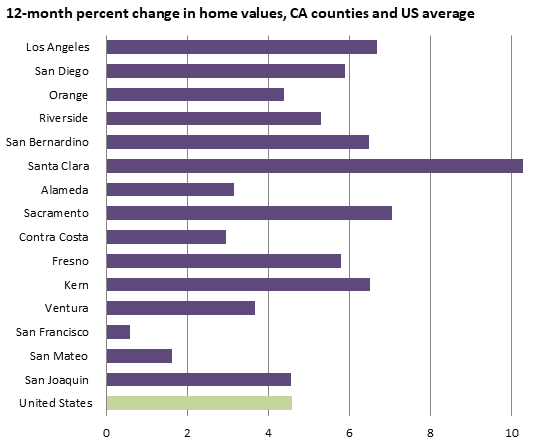