As a result of the COVID-19 pandemic, California has experienced an unprecedented rise in unemployment. Early in the economic downturn, the key measure that captured the impact of the virus on the state’s workers was the number of new unemployment claims being filed each week. At this stage, however, the level of continued claims—the total number of people receiving unemployment benefits each week—is equally important. Should continued claims decline, it could signal that some businesses are bringing workers back and the economy is improving. Should continued claims rise, however, it could signal a continued slowdown in the economy. Note: This post includes data on claims paid under Pandemic Unemployment Assistance (PUA)—a new program that provides unemployment insurance for self-employed workers. We recently became aware of a potentially large level of fraudulent activity within the program. We therefore caution against drawing conclusions about the labor market from PUA claims data.

Department Did Not Accept New Applications During Planned Two-Week Reset. In response the Governor’s Strike Team recommendations to address the backlog of pending claims at the Employment Development Department (EDD), the department shut down incoming applications for unemployment benefits for two weeks while it redirected experienced staff to work down the backlog. (For more information about the strike team recommendations, see our recent handout "Overseeing Improvements at the Employment Development Department During COVID-19.") The two-week reset ended October 5, midway through the reporting week referenced in this post.

Department Continues to Process Elevated Level of Unemployment Claims. During the first partial week following the two-week reset, between October 4 and October 10, the department reported processing 226,176 claims for regular unemployment insurance. Due to expected swings in workload during the two-week reset, this figure represents the department’s placeholder and not actual workload completed. Our office will update these figures with actual workload when they become available.

Following New Certification Rules, Caseload for Self-Employment Benefits Fall Sharply. During August and early September, new claims for the federal Pandemic Unemployment Assistance (PUA) program for self-employed workers spiked unexpectedly, as shown in the figure. To limit potentially fraudulent claims, the administration recently stopped automatically approving backdated PUA claims. Incoming data from the past three weeks suggest this change has discouraged fraudulent claims. First, newly processed PUA claims fell by more than 80 percent over the past four weeks. Second, during last week, benefit payments distributed to self-employed workers declined, falling from $1.0 billion to $800 million. Finally, the number of workers receiving self-employment UI benefits also fell by nearly 20 percent (or 350,000 recipients) over the past five weeks. Taken together, this information suggests that EDD’s new certification restriction is reducing the volume of new claims and benefit payments. Although it seems plausible, it remains too early to say definitively whether this decline is due primarily to a reduction in fraudulent activity. 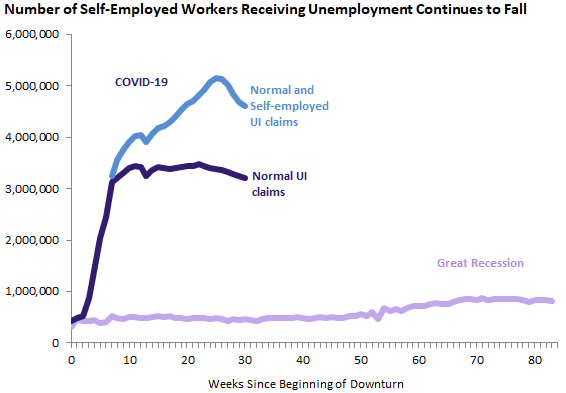 Regular Continued Claims Continue Slow Decline, Falling to 3.2 Million. As of October 10, California had 3.2 million employees receiving regular unemployment benefits. This represents a continuation of the slow decline seen in recent weeks. Since the regular claims caseload peaked in mid-August, the number of workers receiving normal UI benefits has fallen by nearly 10 percent.

Sixth and Final Round of Benefits Paid from New Federal Lost Wages Assistance Program. Benefit payments from the federal Lost Wages Assistance program, which allows states to temporarily increase weekly benefits by $300, were paid out for the sixth and final time last week. As shown in the figure, the state distributed roughly $950 million in federal benefits under this program during the week ending October 10. This amount corresponds to the final benefit payment of six weekly add-on benefits approved by the federal government. In total, about $6 billion was distributed under this short-lived program to workers who were unemployed during the weeks ending August 1 through  the week ending September 5. 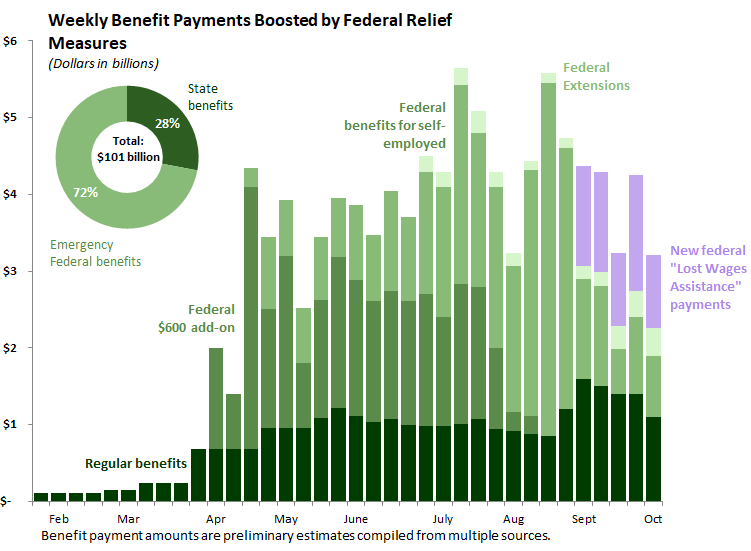