The federal Bureau of Economic Analysis (BEA) recently released state-level estimates of personal income for the second quarter of 2020. Personal income growth is one of the most widely used measures of the health of a state’s economy.

As the chart below shows, wages and salaries (including stock options and bonuses paid to employees) account for the largest share of the state’s personal income. Benefits include employer-paid contributions for health insurance and pensions. Transfer payments are defined as government payments that don’t represent compensation for services performed by the recipient. Normally dividends, interest, and rent account for the second largest share of income, but this category was smaller than transfer payments in the second quarter. 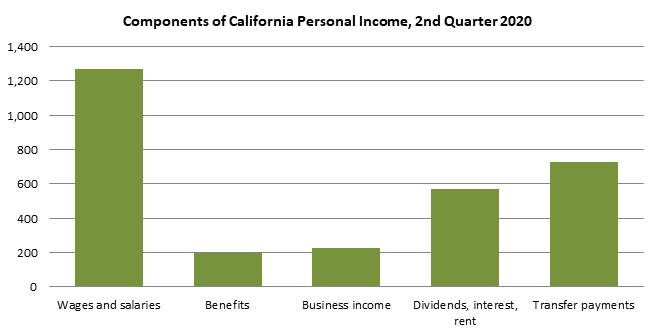 The next chart shows the growth rates of the various categories of personal income over the past quarter and the past four quarters for both California and the United States. The state’s growth rate of 6.5 percent from the first quarter to the second quarter was the fastest since at least 1948, but it stemmed entirely from an unprecedented 88.9 percent increase in transfer payments. An increase in the number of people on regular state unemployment insurance (UI), a temporary federal increase of $600 per week for UI recipients, and the one-time $1,200 federal stimulus checks all contributed to the rise in transfers. The other four income categories all fell. Business income endured the sharpest decline at 13.8 percent, and would have fallen further if not for the federal Paycheck Protection Program loans. The national decline in business income was somewhat smaller at 11.4 percent. Wages and salaries fell slightly more in California (8.0 percent) than nationally (7.2 percent).