Recently, the Labor Research and Statistics Office of California's Department of Industrial Relations (DIR) released updated California consumer price index (CPI) information covering all of 2014. The CPI is a measure of inflation experienced by urban consumers (not a cost-of-living index, per se). CPI allows a comparison of what a "fixed market basket of goods and services" costs compared with what the same basket cost a month or a year or multiple years ago. The California CPI compiled by DIR involves a weighted average of the metropolitan area CPIs for the Los Angeles-Anaheim-Riverside and San Francisco-Oakland-San Jose regions.

Main California CPI Measure Up 1.8% in 2014. The annual average California CPI for 2014 was up 1.8% in 2014. (This measure considers "all urban consumers" in the areas included, which is the key CPI measure.) The 2014 total reflected 1.3% CPI growth in the Los Angeles-Anaheim-Riverside region and 2.8% CPI growth in the San Francisco-Oakland-San Jose area. As we discussed a few weeks ago, CPI measures of housing costs grew faster in the Bay Area than in the Los Angeles area last year (according to BLS data, up 2.5% in the Los Angeles area and 4.7% in the Bay Area, based on annual averages over the course of 2014). The CPI considers both prices for rents and "owners' equivalent rent" for primary residences.

California CPI Up Slightly Faster Than U.S. in 2014. As shown below, annual average trends in the California CPI have tended to track the U.S. CPI measure, with California's measure of price inflation typically slightly above that of the U.S. in strong economic times and at or below the U.S. measure in some weaker years for the economy recently. For 2014 as a whole, the U.S. CPI for all urban consumers was up 1.6%, slightly less than the California CPI growth rate. Due largely to declines in volatile oil prices, prices fell in the U.S. during the closing months of 2014. As we described recently, such low rates of inflation bring certain benefits to consumers, but also pose risks for the economy as a whole. 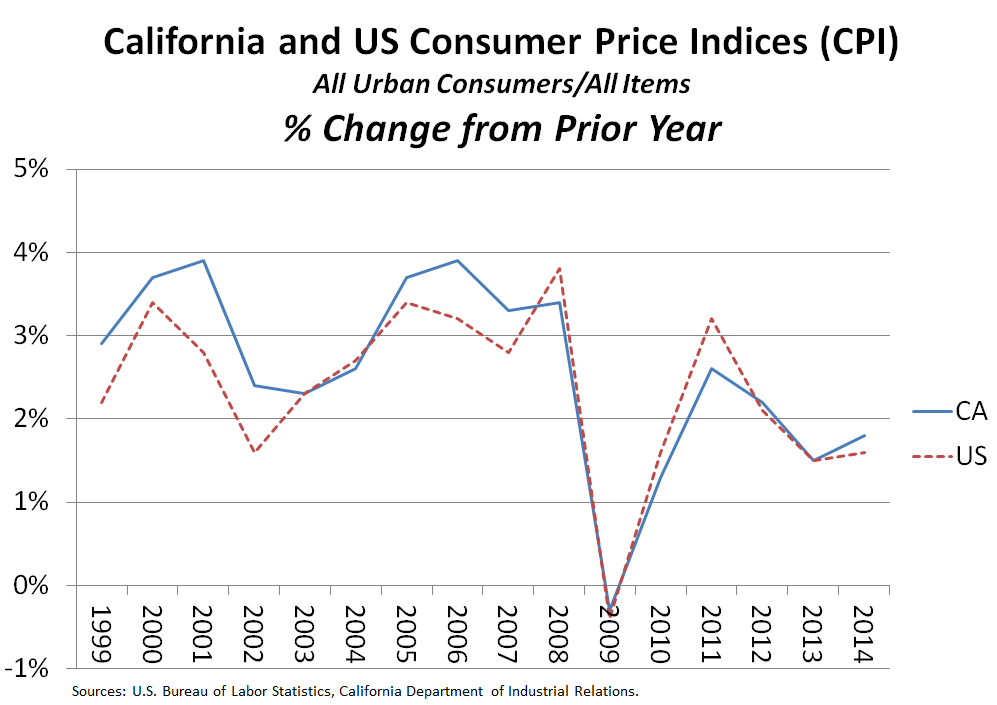 Below is a longer-run trend comparison of California and U.S. CPI, which illustrates the much higher rates of inflation during the 1970s and early 1980s. Inflation rates since the beginning of the last recession have tended to be lower than those rates in prior years. Throughout, as one would expect given California's large contribution to national economic activity, trends in the California and U.S. CPI rates generally mirror each other. 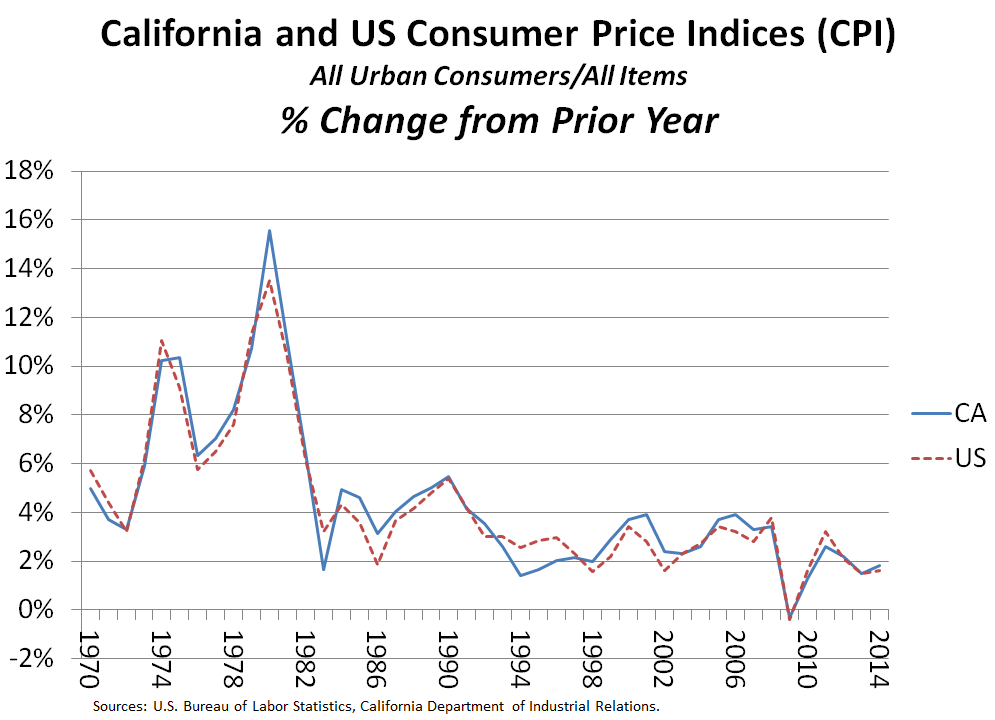