In this post, we provide an interim update to our inflation forecast included in our November Fiscal Outlook and a companion report. This interim update adjusts our forecast for the Consumer Price Index (CPI) for all urban consumers (also known as “headline” inflation) to account for the most recent economic data. Most notably, our updated forecast includes recent data from CPI reports published by the Bureau of Labor Statistics that show slowing inflation.

Around the time our November Fiscal Outlook was released, newly released October CPI data showed a notable drop in month-over-month “core” inflation (CPI excluding food and energy prices). At that time, we cautioned against using any single month of data to draw firm conclusions about future inflation trends. However, subsequent monthly inflation reports have continued to show lower levels of inflation. (For additional information about recent inflation trends, see our inflation tracker.) As a result, our updated forecast suggests headline inflation will likely fall more quickly than we were previously expecting—reaching about 4 percent by the second quarter of 2023. 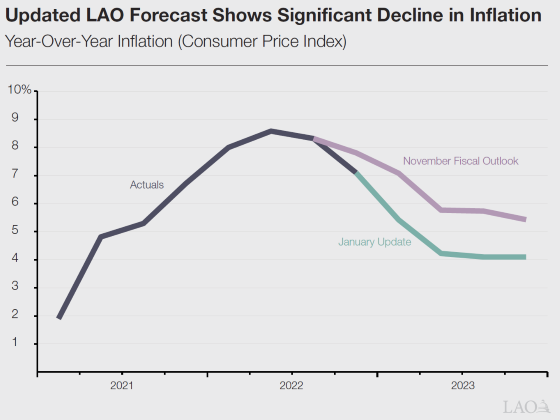