California's Employment Development Department and the U.S. Bureau of Labor Statistics released California's November 2020 state jobs report today. Statewide nonfarm employment rose by an estimated 57,100 in November, the smallest increase since the labor market began to recover in May. The official unemployment rate dropped from 9.0 percent in October to 8.2 percent in November, but remains far above the estimate of 3.9 percent in February before the COVID-19 pandemic caused large-scale upheavals. The survey reflects job changes through the week of November 8 to November 14. California accounted for 23.3 percent of the national estimate of 245,000 net jobs gained in October, more than double its 11.5 percent of the nation’s total payroll jobs as of February.

The figure below shows how employment has evolved in both the state and the nation since the start of the pandemic. Overall employment in the state as of the middle of November was 8.0 percent below the level of February, somewhat worse than the national figure of 6.4 percent. About a quarter of the gap is attributable to the leisure and hospitality sector which includes restaurants, bars, and hotels. Aggregate employment in other sectors has also recovered more slowly in the state than in the nation as a whole. 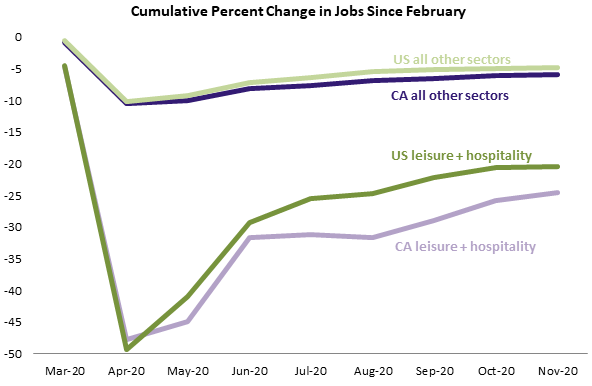 The next figure summarizes nonfarm employment by sector based on the monthly survey of employers. The state’s hard-hit leisure and hospitality sector again recovered the most jobs, and the transportation sector added a lot of jobs to prepare for the remote holiday shopping season. Every other sector apart from health services and administrative services stagnated or declined, and employment in most of these sectors remains well below the February level.