Housing Costs for Californians Have Grown Faster Than Incomes. As shown in the figure below, median housing costs have increased faster than median incomes over the past decade. For many households, this means that a growing share of income must now be devoted to housing. This overall trend, however, combines housing costs and incomes for renters and homeowners. Below we look at how trends for renters and owners have differed since 2001. 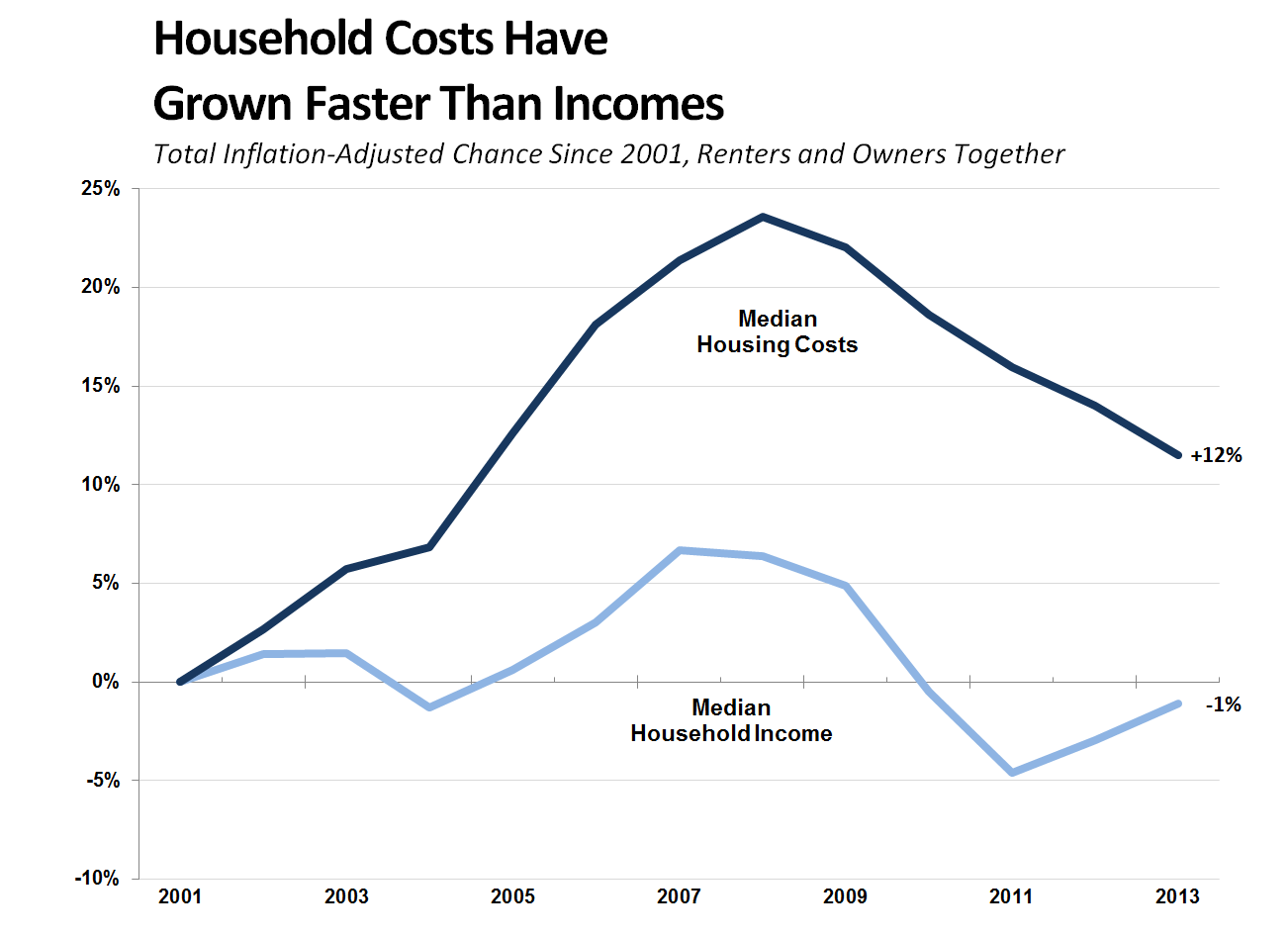 After Climbing During Housing Boom, Owner Housing Costs Have Come Down Notably. In 2001, the median California homeowner spent about $1,600 per month (adjusted for inflation) on their mortgage, property taxes, utilities, and insurance. During the housing boom, this amount climbed significantly, peaking at $2,100 in 2008. Between 2008 and 2013, however, home prices declined and many newer homeowners purchased at prices well below peak. As a result, monthly housing costs for California homeowners fell to $1,600 in 2013, the same inflation-adjusted level as 2001. (Despite this decline, monthly homeowner costs in California are still $600 higher than they are elsewhere.) Over the same period, median household income for owners has stayed relatively flat. As a result, the so-called "gap" between housing costs and incomes for homeowners has closed since its widest point in 2008. 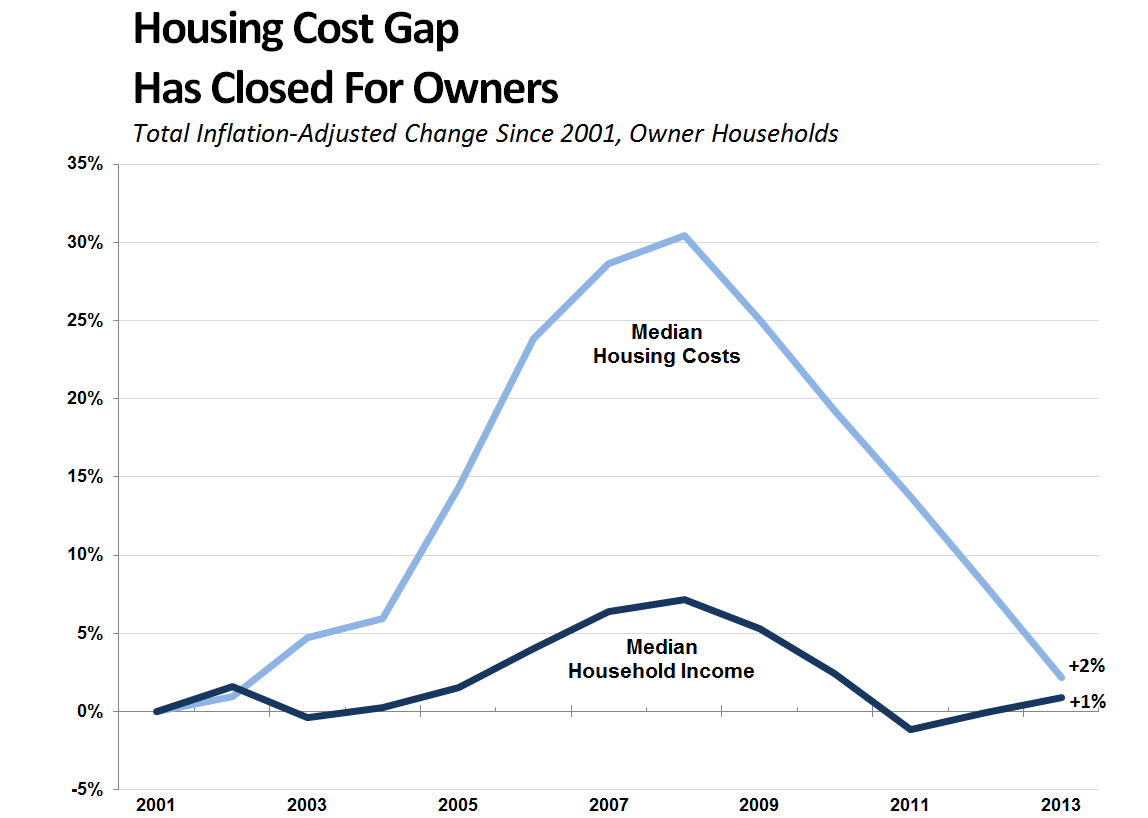 Renter Costs Increased Steadily, Even During Housing Downturn. Median renter housing costs were about $1,000 monthly in 2001, and have since risen about 20 percent to $1,200 monthly. Over the same period, inflation-adjusted median renter income fell slightly, from $41,300 annually to $40,000. Taking both these movements into account, the gap between renter costs and renter incomes--as shown in the figure below--widened considerably over the past decade, meaning most renters today must devote a larger share of their monthly income to rent. 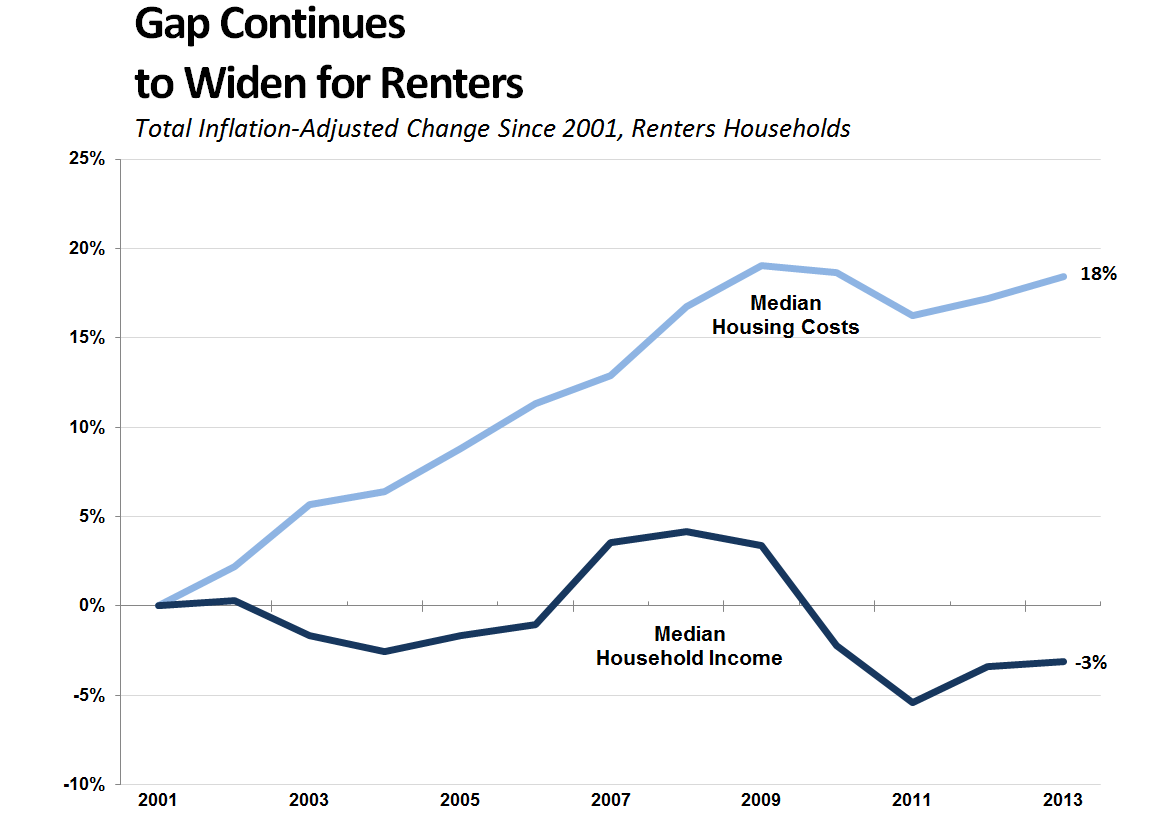 California’s Shifting Housing Landscape. The composition of California's housing stock between renter- and owner-occupied shifted dramatically during the recession. As shown in the figure below, the number of renter households statewide increased steadily, while the number of owner households declined. This occurred, in part, due to the high-levels of foreclosure, short-sales, and other financially motivated home sales that took place during the housing crisis, pushing many homeowners into the rental market. 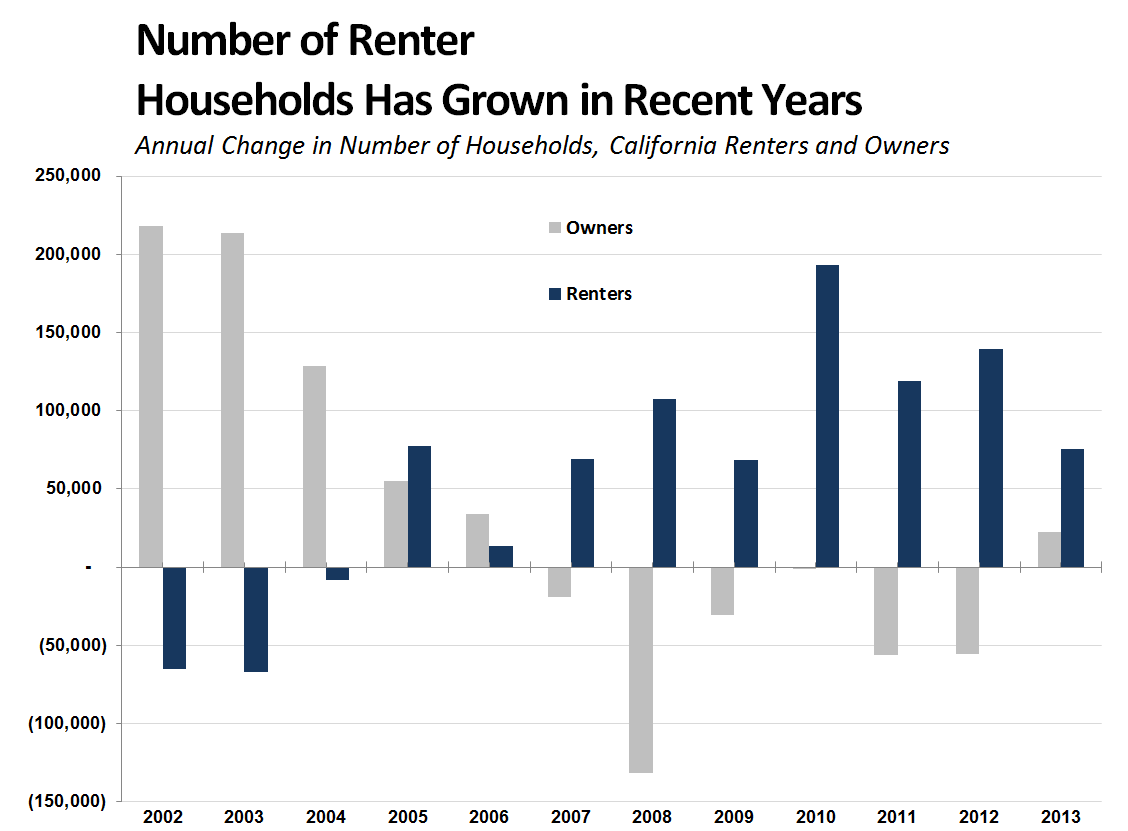 Why Have Renter Costs Grown While Owner Costs Have Fallen? As shown in the figure below, median inflation-adjusted renter costs increased 18 percent since 2001, while median inflation-adjusted homeowner costs increased just 2 percent (after peaking in 2008). Identifying exactly why these trends occured is complicated by several factors. For example, each year some renters choose to become owners (and vice versa). Households that move between the two categories influence (1) the demand for housing in each category (dictating prices and therefore housing costs), and (2) the median income levels for renters and owners. 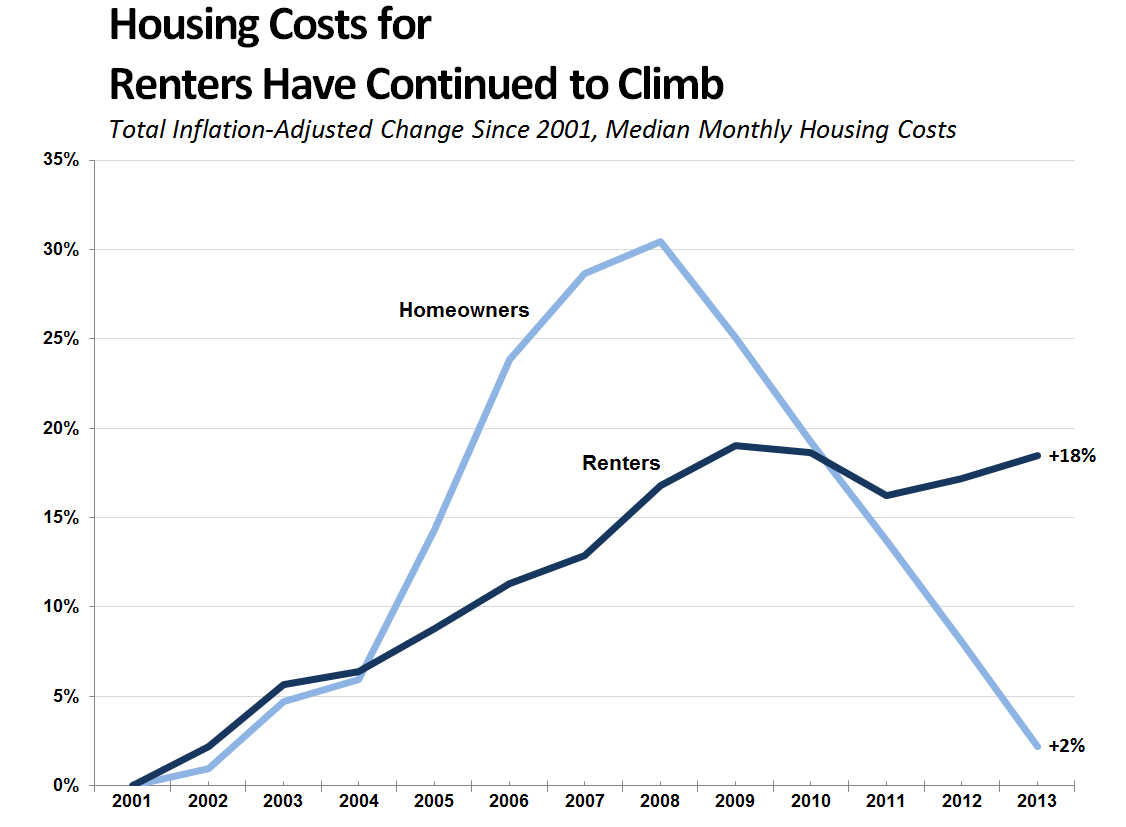 ​​Below, we highlight a few potential reasons why housing costs for renters have continued their upward trajectory, despite the decline in inflation-adjusted costs for the state's homeowners.

Source Information. This entry is based on data from the 1-year American Community Survey (ACS) for 2001 through 2013. The ACS collects responses every year, instead of every 10 years. This entry uses the ACS public use microdata sample. This file includes anonymous individual responses to the survey that allow statistical users to perform custom analysis.