As a result of the COVID-19 pandemic, California has experienced an unprecedented rise in unemployment. Early in the economic downturn, the key measure that captured the impact of the virus on the state’s workers was the number of new unemployment claims being filed each week. At this stage, however, the level of continued claims—the total number of people receiving unemployment benefits each week—is equally important. It is now clear that the unprecedented amount of state and federal dollars flowing to California workers in the form of weekly UI benefits has stabilized household budgets throughout the pandemic. Under normal economic conditions, the state distributes about $100 million in UI benefits per week. During the COVID-19 pandemic, the state has regularly distributed several billion dollars per week in UI benefits. In total, the state has distributed more than $115 billion in UI benefits to California workers during the pandemic. 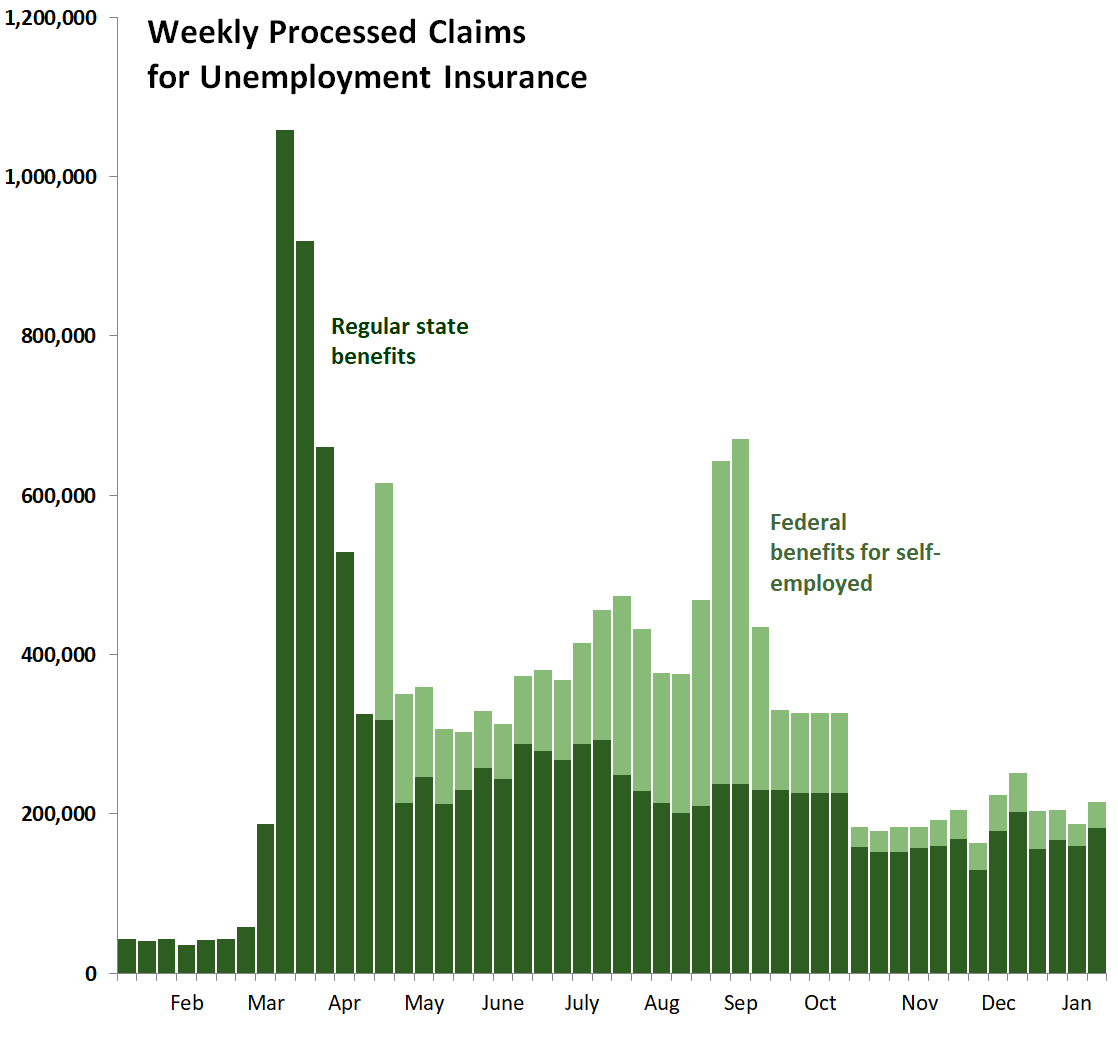 Initial Claims for Federal Self-Employment Benefits Falls Sharply at End of Year. During August and early September, new claims for the federal Pandemic Unemployment Assistance (PUA) program for self-employed workers spiked unexpectedly, as shown in the figure above. To limit potentially fraudulent claims, the administration stopped automatically approving backdated PUA claims. Processed claims for this program have fallen sharply since the administration’s action to limit fraudulent claims. Since that time processed claims have remained at this new lower level, between 20,000 and 50,000 claims per week.

Regular Continued Claims Continue Slow Decline, Falling to 2.8 Million. As of January 9, California had 2.8 million workers receiving regular unemployment benefits. As shown in the figure below, this represents a continuation of the slow decline seen in recent months. Since the regular claims caseload peaked in mid-August, the number of workers receiving normal UI benefits has fallen by about 20 percent. 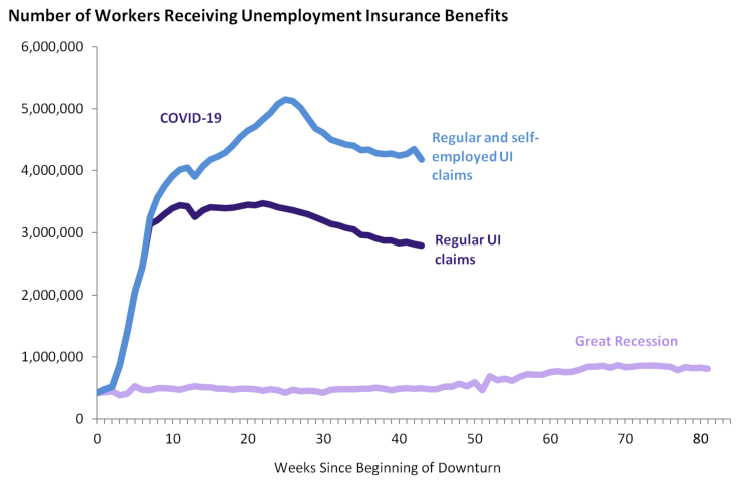 After Some Decline, Continued Claims for Self-Employed Workers Inches Upward. After declining by about 250,000 workers since its peak in early September, the number of self-employed workers receiving federal PUA benefits increased somewhat in recent weeks before declining significantly during early January. Our office is still investigating the underlying reasons for this trend change.

Weekly UI Benefits Significanly Boosted by Federal Stimulus, Which Recently Was Extended. As shown in the figure below, the federal expanded UI benefits enacted in the spring significantly boosted weekly UI distributions in the state throughout the spring and summer. A smaller federal benefit expansion continued through most of the fall. Looking ahead, the first rounds of additional federal UI benefits will be distributed to California workers in the next few weeks, most notably a $300 weekly add-on for all UI recipients through mid-March. 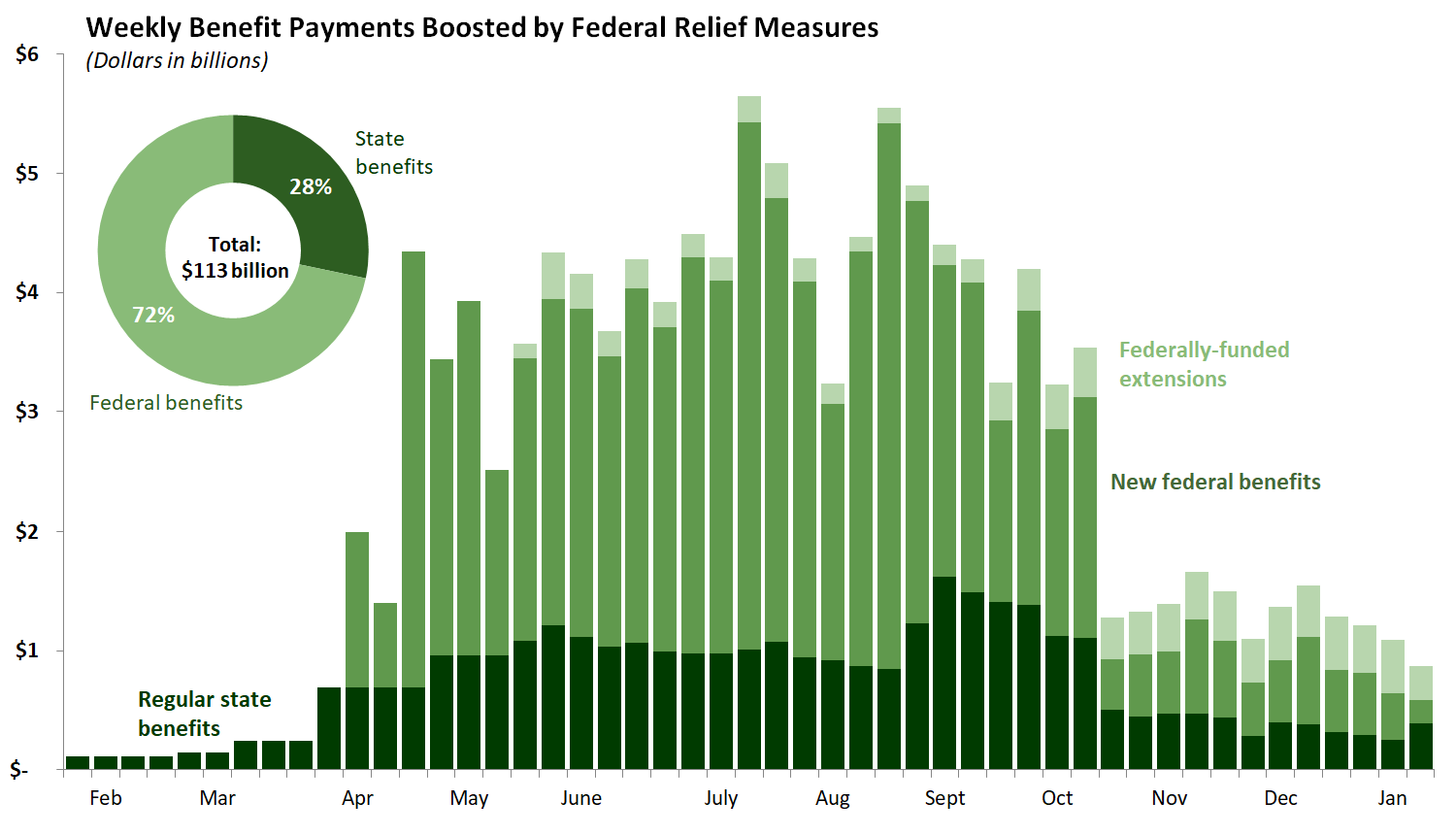 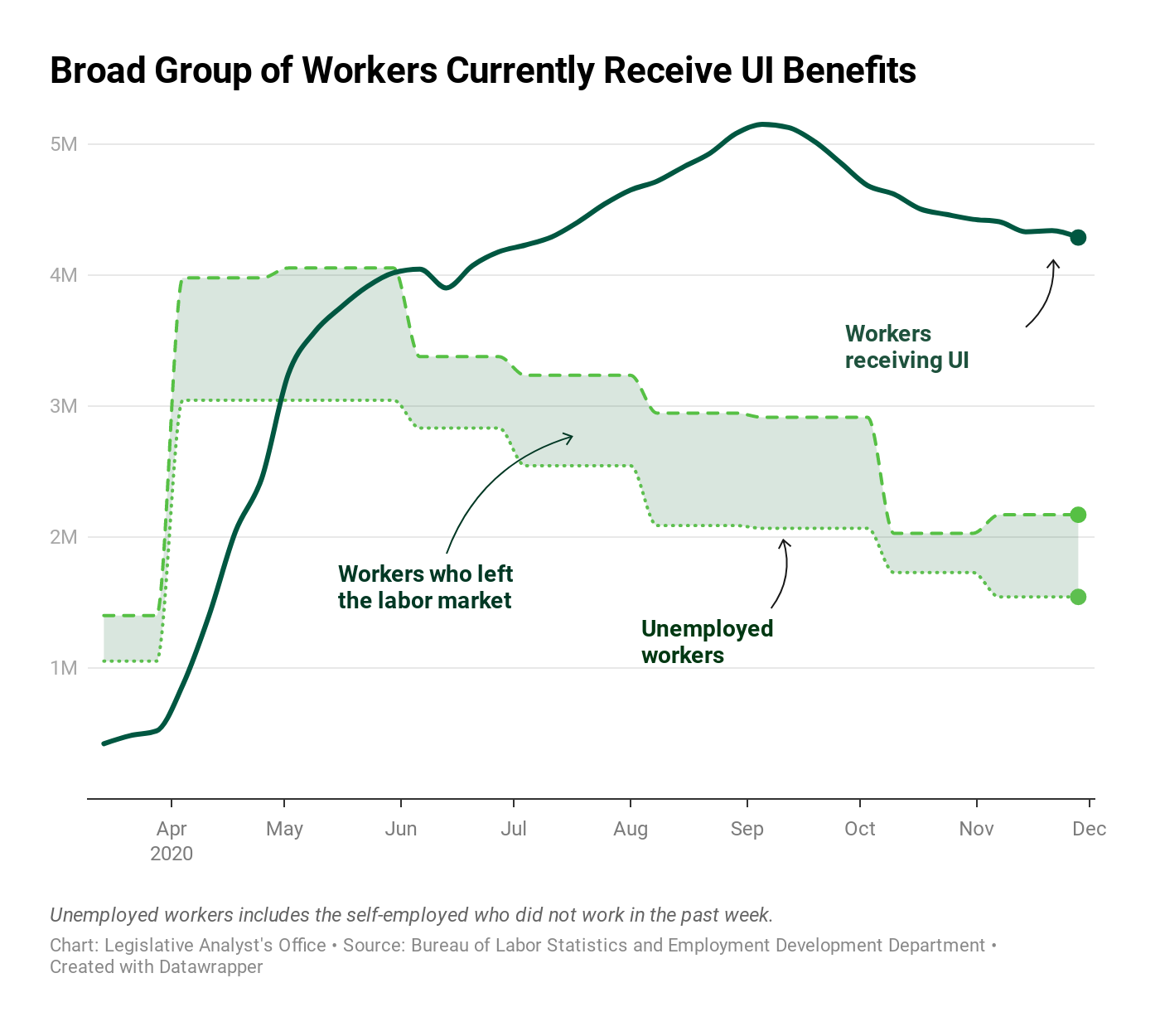