California's Employment Development Department and the U.S. Bureau of Labor Statistics released California's December 2020 state jobs report today. Statewide nonfarm employment fell by an estimated 52,200 in December, the first decline since April. The official unemployment rate rose from 8.1 percent in November to 9.0 percent in December, the same rate that was estimated for October. The unemployment rate stood at 3.9 percent in February before the COVID-19 pandemic caused large-scale upheavals. The survey reflects job changes through the week of December 6 to December 12. California accounted for 36.6 percent of the national estimate of 142,600 net jobs lost in December, more than triple its 11.5 percent of the nation’s total payroll jobs as of February.

The figure below shows how employment has evolved in both the state and the nation since the start of the pandemic. Overall employment in the state as of the middle of December was 8.3 percent below the level of February, somewhat worse than the national figure of 6.4 percent. Nearly half the gap is attributable to the leisure and hospitality sector which includes restaurants, bars, and hotels. This sector took a sharp tumble between early November and early December as the pandemic worsened, and the effect was especially acute in California. Aggregate employment in other sectors rose in December, and California closed some of the gap with the rest of the nation. 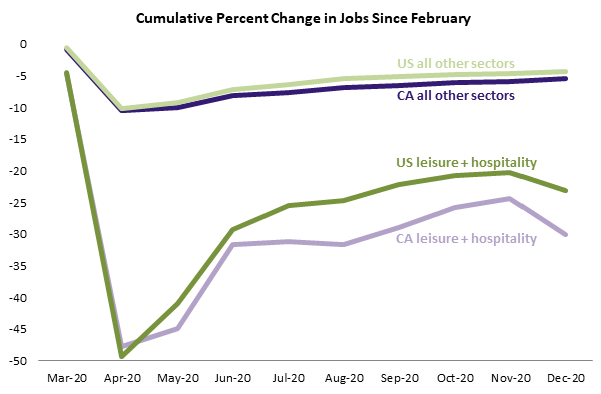 The next figure summarizes nonfarm employment by sector based on the monthly survey of employers. The decline in leisure and hospitality sector stands out. The state’s construction and professional/technical services sectors posted big gains in December, and have made up the ground they lost to the pandemic. Apart from that, December saw mostly stagnation as employment in most sectors remains well below the February level.