A Look at Housing Markets Outside of California's Major Metros

Majority of State’s Counties Are Outside the Major Metros. The state's major metros are comprised of 18 of the state's most populous counties. Forty of the state’s 58 counties, however, are located outside of the state’s major metros. Just under one-fifth of California’s population lives in these 40 counties. For this analysis, we group these 40 counties into eight regions: Central Coast, Desert, North Bay, North Coast, Sacramento Valley, San Joaquin Valley, Shasta-Cascade, and Sierra. The map below displays these regions. 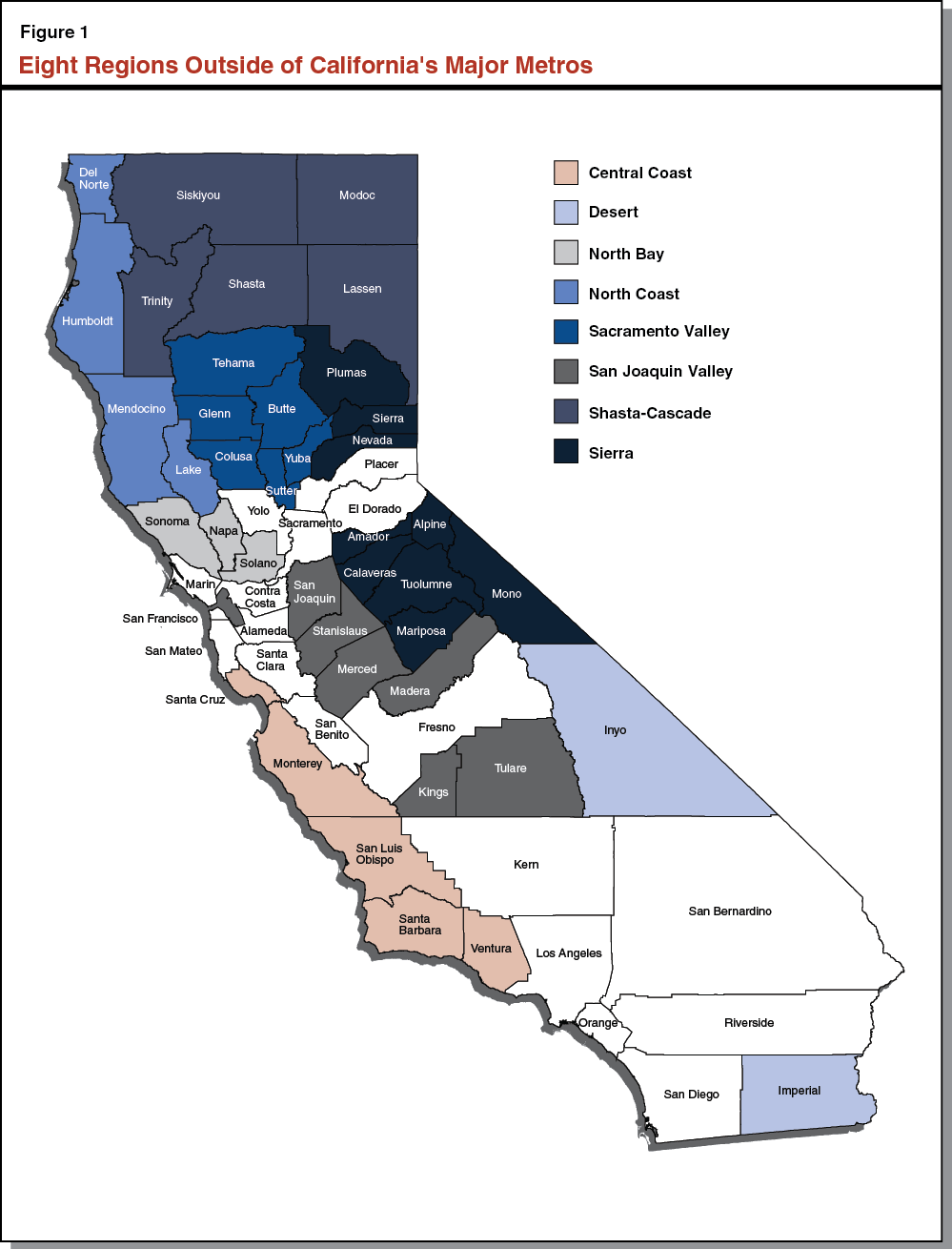 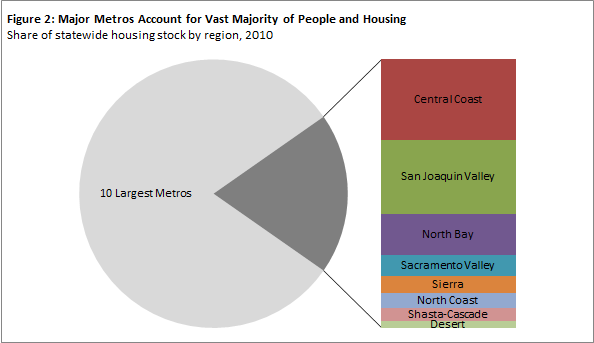 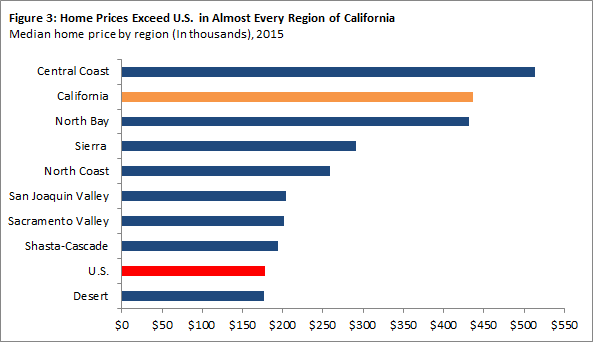 Home Prices Just About Everywhere in California Exceed the Nation. Median home prices in the eight regions outside of California’s major metros vary considerably, from a high of $513,000 in the Central Coast to a low of $177,000 in the Desert. Home prices in all but one region (the Desert) exceed the U.S. median home price ($179,000). The Central Coast, however, is the only region outside the state’s major metros where home prices are higher than the statewide median ($437,000). 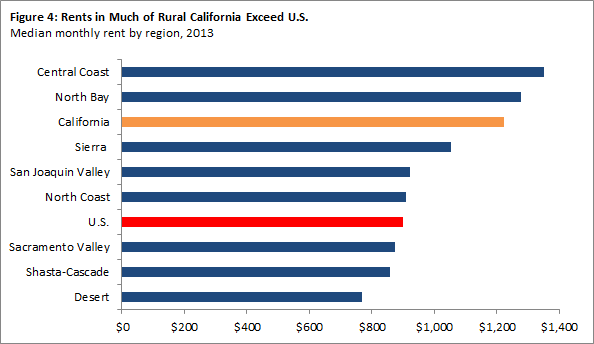 Rents Also Exceed the Nation in Most Parts of California. Median monthly rents also vary considerably across the regions outside of the state’s major metros. The highest rents are found in the Central Coast ($1,351) and the North Bay ($1,276), where rents exceed both the California and U.S. medians. Rents in the other six regions fall below the statewide median rent; however, rents in three of these regions—Sierra, San Joaquin Valley, and North Coast—still exceed the nation. The state’s lowest rents (between $770 and $870) are found in the Sacramento Valley, Shasta-Cascade, and Desert regions, where rents fall below the U.S. median. 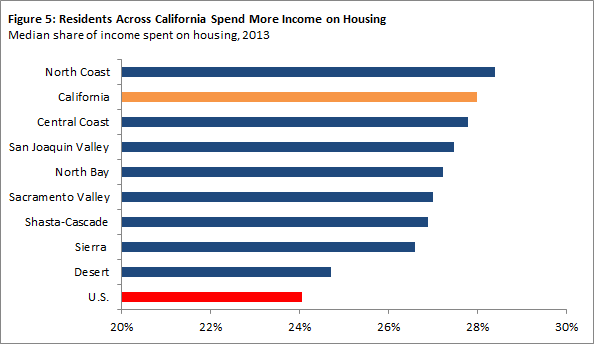 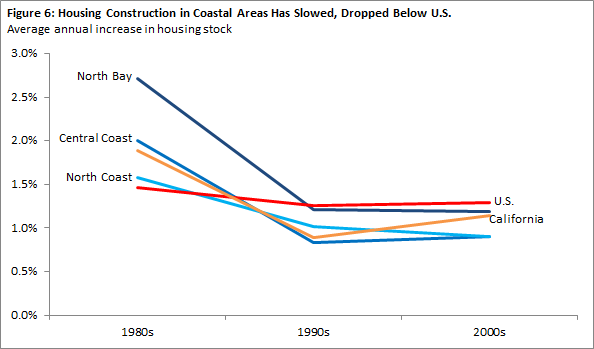 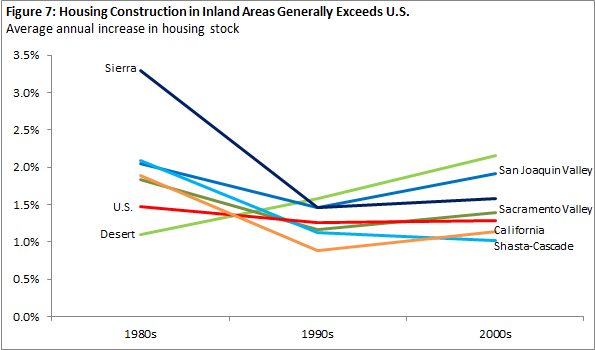 Less Housing Construction Generally Leads to Higher Prices. In California’s High Housing Costs, we show that declining rates of new housing construction tend be associated with higher home prices and rents. This is because reduced housing construction can lead to a shortage of housing. With housing in limited supply, households compete with each other and bid up prices and rents. Looking over the last three decades, regional trends in California appear to be consistent with this story. Building levels in relatively expensive coastal regions—Central Coast, North Bay, and North Coast—dropped below the national average during the 1990s and 2000s. In contrast, building levels generally exceeded the national average in relatively inexpensive inland regions. 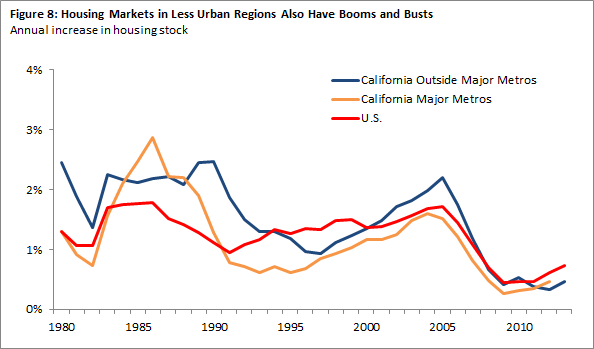 Housing Construction Is Cyclical. Housing construction tends to rise and fall over time tracking with changes in many factors such as the health of the economy and mortgage lending availability. During the U.S. housing bubble of the mid-2000s, building levels rose substantially in most parts of the country. Housing construction reached exceptionally high levels in areas of California outside the state’s major metros. At their peak in 2005, annual building rates (percentage increase in an areas housing stock) averaged 2 percent in regions outside of California’s major metros, compared to 1.7 percent in the rest of the country. At the peak, build rates in these areas were nearly double the average building rates experienced during the 1990s.