May 2021 Auction Generates $916 Million in State Revenue. The California Air Resources Board (CARB) released a summary of the results from the most recent quarterly cap-and-trade auction held on May 19, 2021. Based on the preliminary results, the state will receive an estimated $916 million in revenue from the auction. As shown in Figure 1, this amount is substantially more than what the state received from the February 2021 auction ($647 million). The change is due primarily to a 34 percent increase in the number of state-owned allowances offered and sold at the May auction compared to February. The cap-and-trade regulation requires that unsold allowances from previous auctions get reoffered at subsequent auctions, under certain conditions specified in the regulation. Since these conditions were met, the May auction offered about 12 million state-owned allowances that previously went unsold in the May 2020 auction. 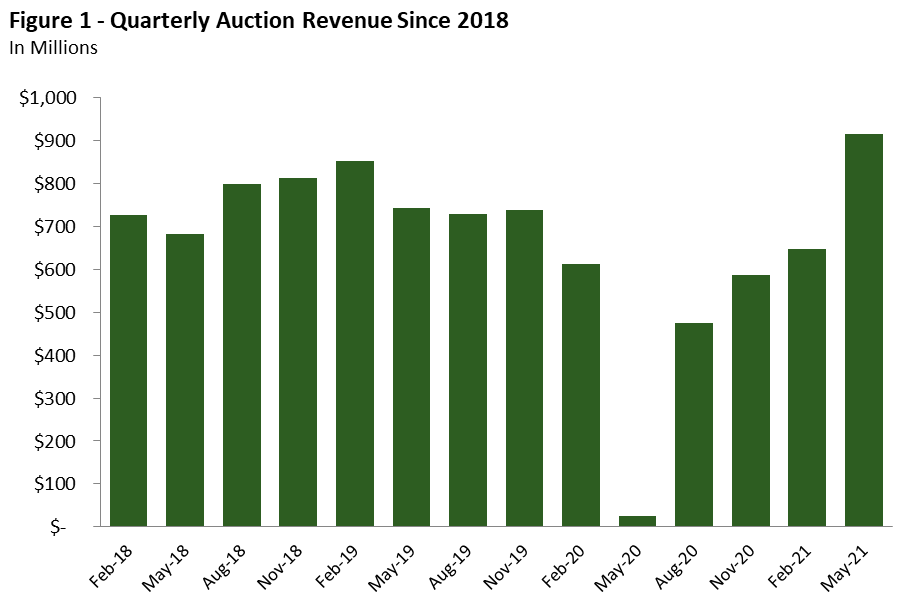 An increase in allowance prices also contributed to the higher revenue. Allowances sold for $18.80 for 2021 vintage allowances and $19.04 for 2024 vintage allowances, which are roughly $1 more than the prices at the February auction. The May prices were also more than $1 above the auction floor price established by CARB ($17.71 for both vintages).

Auction Revenue $337 Million Higher Than Governor’s May Revision Assumes. Auction revenue is deposited in the Greenhouse Gas Reduction Fund (GGRF). The preliminary auction results suggest 2020-21 revenue will total about $2.6 billion—or $337 million higher than the May Revision assumes. Under current law, a total of 65 percent of auction revenue is continuously appropriated to the high-speed rail project (25 percent), Affordable Housing and Sustainable Communities Program (20 percent), Transit and Intercity Rail Capital Program (10 percent), low carbon transit operations (5 percent), and safe drinking water (5 percent). As a result, of the $337 million in additional revenue, about $219 million will be allocated to these continuously appropriated programs. The remaining $119 million in additional revenue will be available for discretionary spending—which can be allocated by the Legislature as part of this year’s budget process or in future years.

Auction Results Consistent With Recent LAO Estimates Provided to The Legislature. The results from the May auction are very similar to our office’s most recent revenue estimates totaling about $2.6 billion in 2020-21. We also estimated about $3 billion in revenue in 2021-22 (an average of roughly $750 million per quarterly auction), assuming all allowances sell at roughly the floor price.

Legislature Could Allocate About $1.4 Billion GGRF to Discretionary Programs While Also Maintaining a Reasonable Reserve. After accounting for certain ongoing expenditures (such as continuous appropriations), we estimate that there will be a total of nearly $1.8 billion GGRF available for a combination of (1) discretionary spending and (2) building a reserve in the fund in 2021-22. However, there continues to be significant uncertainty about 2021-22 auction revenue and, as a result, we think it would be prudent to adopt a healthy reserve in the fund. The amount the Legislature appropriates for discretionary programs in the 2021-22 budget—and how much it leaves in the fund for reserves—ultimately depends on its risk preferences. In our view, the Legislature could allocate up to about $1.4 billion to discretionary programs while also maintaining a reasonable reserve in the fund (nearly $400 million). This reserve amount would be more than 10 percent of estimated annual revenue for the fund—a benchmark we have highlighted in past analyses.