California's Employment Development Department and the U.S. Bureau of Labor Statistics released California's August 2021 state jobs report today. Statewide nonfarm employment grew by an estimated 104,300 in August, in line with previous monthly gains this year. The official unemployment rate dropped from 7.6 percent to 7.5 percent, less than half the peak of 16.0 percent last April at the height of the lockdown but still nearly double the pre-pandemic level of 3.9 percent last February. The survey reflects job changes through the week of August 9 to August 15. California accounted for a hefty 44.0 percent of the national estimate of 235,000 net jobs gained in July, nearly four times its 11.6 percent of the nation’s total payroll jobs as of February 2020.

The figure below shows how employment has evolved in both the state and the nation since the start of the pandemic. Overall employment in the state as of the middle of June was 5.8 percent below the level of February 2020, considerably worse than the national figure of 3.5 percent. Nearly half of this 2.3 percentage point gap is attributable to the leisure and hospitality sector which includes restaurants, bars, and hotels. The leisure/hospitality gap closed somewhat in August: it may be the case that California restaurants and other businesses were generally running at lower capacity than the national average through the middle of July, and thus had less reason to curtail hiring as the pandemic surged. 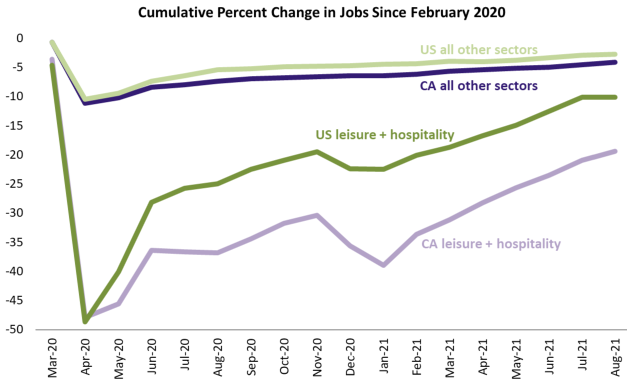 The next graph isolates aggregate employment in the other sectors and shows that the gap between the state and the rest of the nation also narrowed in August. 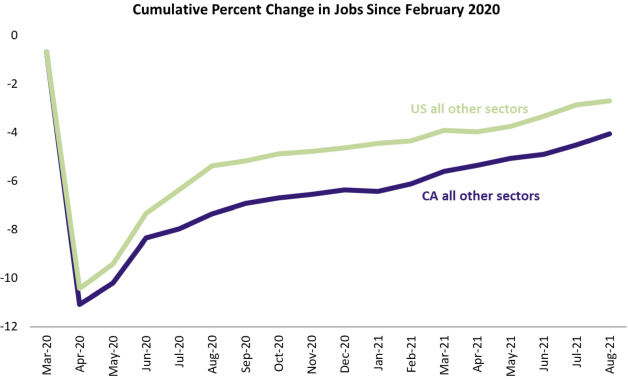 The next figure summarizes nonfarm employment by sector based on the monthly survey of employers. The leisure and hospitality sector discussed above accounted for about a third of the statewide net gain. More than half the gain came from the local government sector: August hiring was much higher than normal, as most California public schools are operating in person this academic year after being partially or fully remote last year.