Bank Lending Surged in California in 2014

California Bank Lending Growth Well Above the National Growth Rate. A highlight of this and other FRBSF reports has been the strong growth in lending by banks in California last year. As shown in the figure below, for 4Q2014, the year-over-year growth rate for such lending among California banks was 15.5%, which was well above the nation's 7.0% growth rate. "While economic gains likely fueled most loan growth" in the region recently, the FRBSF indicated that "looser underwriting may have contributed as well," even as bank asset quality improved, as discussed below. Bank credit is a critical aid to economic activity in residential building and commercial and industrial expansion, as well as consumer spending funded by credit cards, auto loans, and the like. 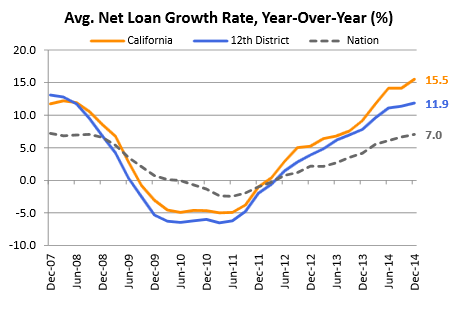 4Q2014 California Annual Loan Growth Rate Led All States But Connecticut. The FRBSF map shown below indicate that the 15.5% year-over-year growth rate in net loans and leases at commercial banks in California for the fourth quarter of 2014 ranked second in the nation, behind Connecticut's 16.6% growth rate. 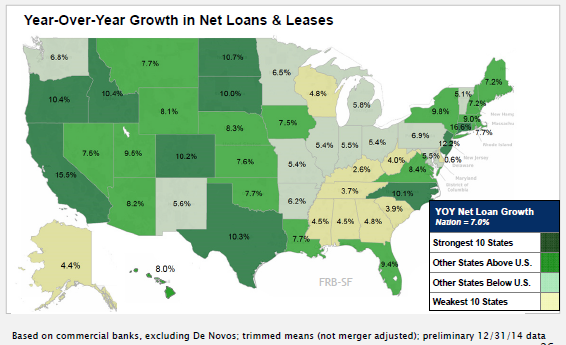 As shown below, bank lending growth in western (that is, 12th District) states, especially California, was stronger than the nation's overall 7.0% growth rate in 2014. California's growth rate for lending neared pre-recession peaks, the FRBSF reported. 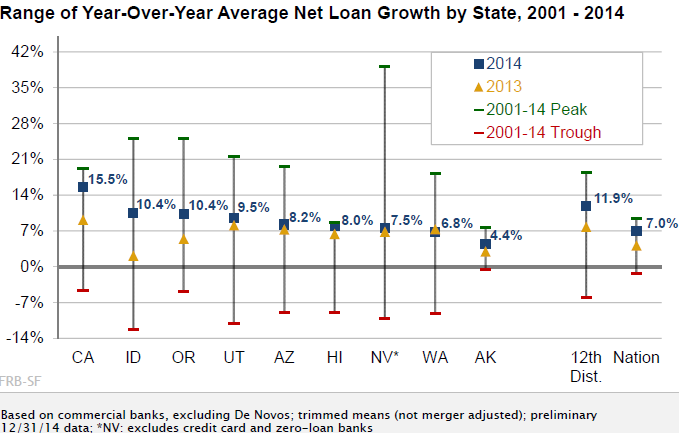 The recent, relatively strong growth of lending in western states is typical of a past trend, illustrated below in an FRBSF chart. The chart shows that bank lending in this part of the country has accelerated faster than in the rest of the U.S. during strong economic times since 2001. Conversely, following the 2009 economic downturn (precipitated by a collapse in mortgage-related credit), lending in the west contracted much more than in the rest of the country. 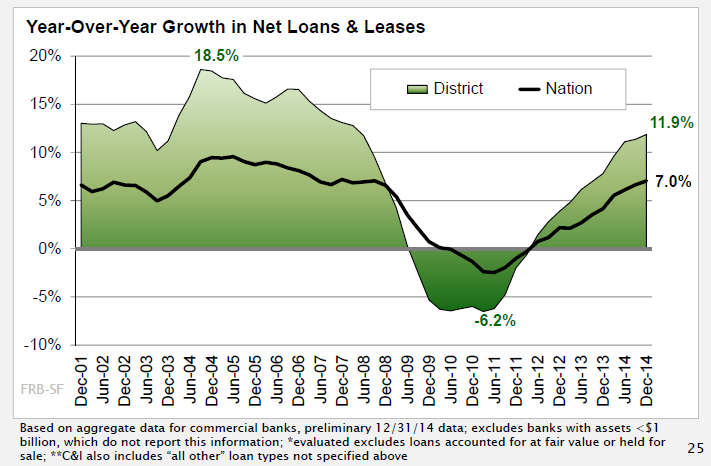 What Types of Loans Accounted for the Increase? The FRBSF reports that in the west, "commercial and industrial lines and certain real estate loan categories continued to lead" recent lending growth in dollar terms. The figure below, for instance, shows the contributors to lending growth tracked by FRBSF for small and medium-sized 12th District banks, as well as nationwide banking institutions with assets of over $50 billion. Nonresidential and commercial/industrial (C&I) loans appear to have been among the largest contributors to the loan growth reported by FRBSF. Growth in consumer loans was larger among the large national banks covered in the FRBSF report. 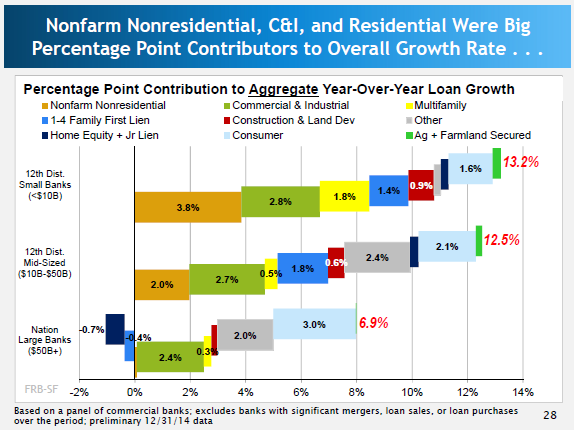 While construction and land development (C&LD) loan portfolios reportedly are relatively small in dollar terms, their percentage growth has outpaced other lending types, the FRBSF figure below shows. Lending for multifamily residential buildings grew by 16% year-over-year in the 4Q2014 data. By contrast, growth rates for consumer lending and first-lien single-family home loans have been relatively smaller. 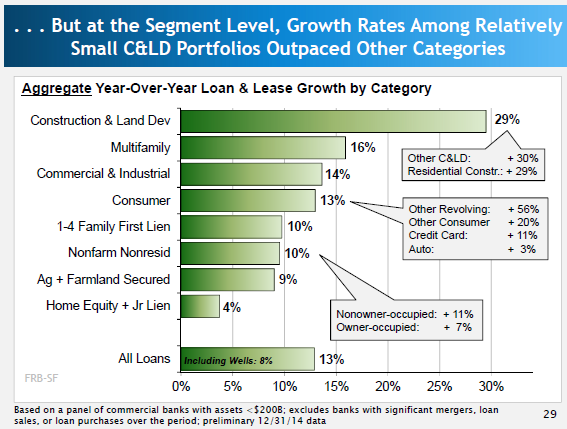 Credit Standards Reportedly Loosening, As Asset Quality Improves. As shown in the FRBSF figure below, more lenders have been easing than tightening credit standards recently across most major lending categories listed. At the same time, FRBSF reported that asset quality at banks in the west "continued to improve, especially among smaller banks," as the districtwide "average nonperforming asset ratio, which includes both noncurrent loans and foreclosed real estate, ended the year at 0.94%, comparable to the nation," but still above pre-recession averages.  At California commercial banks, noncurrent loans equaled 0.89% of total assets as of December, a separate FRBSF document reported, slightly better than the national rate. 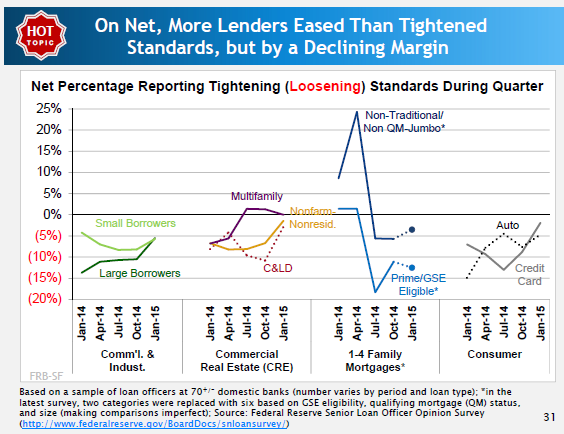