(May 5, 2015 Note: The specific end-of-month numbers below have been superseded by revised monthly numbers from the tax agencies described here.) 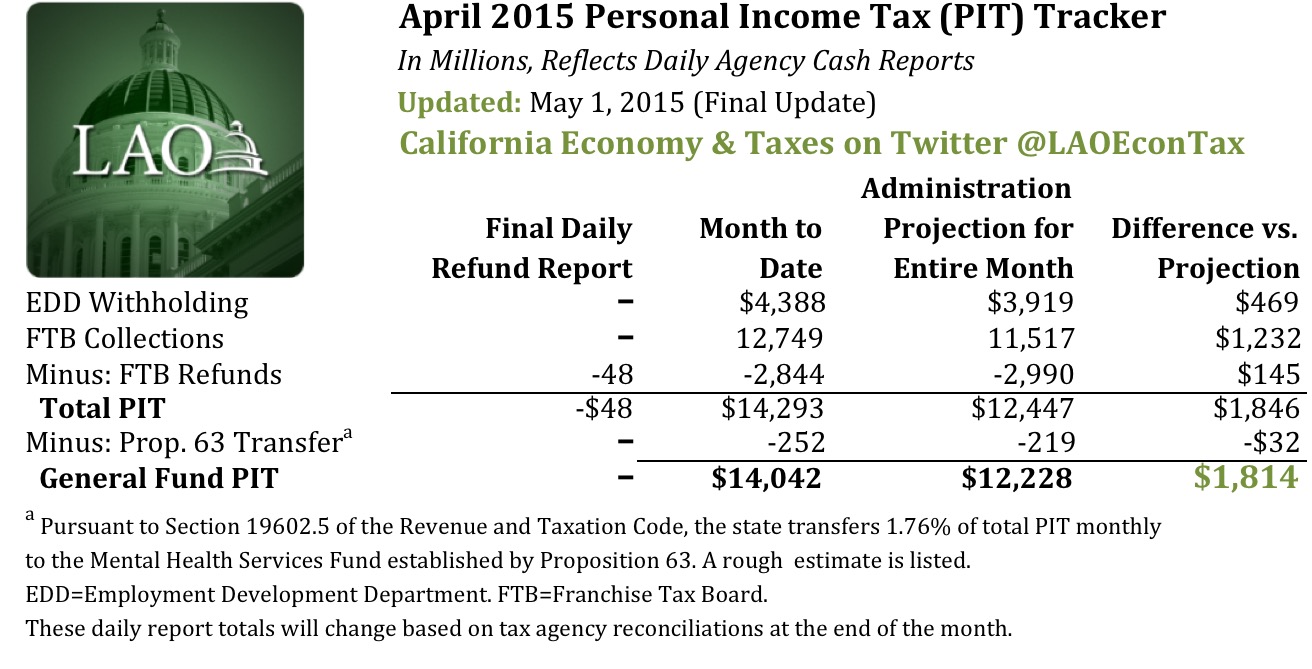 April PIT Collections. PIT agency cash collection gains in April resulted from both PIT withholding and FTB collections, the latter of which consists this month of (1) 2014 final return and extension payments and (2) 2015 quarterly estimated payments by high-income individuals and business owners. EDD withholding was up about 15% from last April, while FTB collections (not counting refunds) were up around 23%. Overall, total PIT was up around 26% from last April. Some of these gains likely result from capital gains, bonus, and option income that may or may not recur next year.

How Big Will June Tax Collections Be? General Fund agency cash revenues began this month $1.3 billion above 2014-15 fiscal year projections. As noted above, PIT agency cash this month will add around $1.8 billion to this fiscal year amount, and corporate income taxes will add another $90 million. Sales taxes and other revenues could be above or below estimates for April too, but that data will not be available until later in May. Looking ahead, June is the last month in the 2014-15 fiscal year and another major month for PIT collections.

June PIT collections result overwhelmingly from quarterly estimated payments by taxpayers. Therefore, the more that this month's totals show an increase in 2015 quarterly estimated payments, the better the prospects for large additional agency cash collection gains in June. We will not know how much of April's FTB collection gains came from 2015 quarterly estimated payments, as opposed to 2014 tax payments, for another week or two until additional data is received. If, hypothetically, June estimated payments are up 25% from last year, this could result in June agency cash collections being around $2 billion over the administration's current projections for that month alone, thereby adding to the 2014-15 fiscal year revenue gains already in hand. Such a scenario would be more likely to occur if there is no sustained stock market drop between now and June. (The revised May revenue estimates from both the administration and our office will reflect an updated estimate of June revenues, but the bulk of the June revenues will not be received until after the June 15 legislative deadline for approving the state budget.)

Added Revenues Boost School Spending, May Raise Proposition 2 Requirements. The vast majority of the added revenues coming into the state treasury can be expected to fund higher required school spending. Also, the added revenues may contribute to higher Proposition 2 rainy-day fund and debt payment requirements. We discussed these issues in our April 7 report on possible May Revision budget scenarios, which considered the possibility that 2014-15 budgetary revenues would be up to $4 billion above the administration's current fiscal year projections. In our Proposition 98 analysis in February (see page 18), we discussed how 2014-15 budgetary revenue gains totaling well over $4 billion could result in Proposition 98 maintenance factor being fully paid off. Such a large 2014-15 revenue gain (that is, well over $4 billion above the administration's current projections for the fiscal year) could produce stronger bottom line results for the General Fund compared to those in our April 7 report scenarios in some, but not all, cases. The more that 2014-15 budgetary revenues grow over this $4 billion threshold, the greater the chance that the General Fund will have additional resources for larger reserves, bigger debt payments, or other new budgetary commitments. If that type of bottom line budget improvement emerges, the added resources available for such budget priorities likely would be small.

More Detail on Budget Bottom Line Must Await the May Revision. Both our office and the administration will finalize new estimates of the state's budget condition over the next few weeks, releasing them in mid-May. As our April 7 report illustrated, the precise bottom line of the budget depends on the interplay between 2013-14, 2014-15, and 2015-16 revenues, economic variables, and the state's key constitutional budget formulas. While the totals we report here reflect real-time "agency cash" collections, the annual budgetary revenue totals that go into the annual budget act are modified under the state's complex revenue accrual protocols, and these accruals could add to or subtract from the agency cash fiscal year revenue total by hundreds of millions of dollars or more. Another factor will be whether estimates of caseload and program costs rise or fall in the May Revision.

Below is a listing of daily collection totals for both April 2015 and April 2014. Tax agency officials will check and reconcile amounts, which can result in changes from the tentative totals we have been reporting on a daily basis. 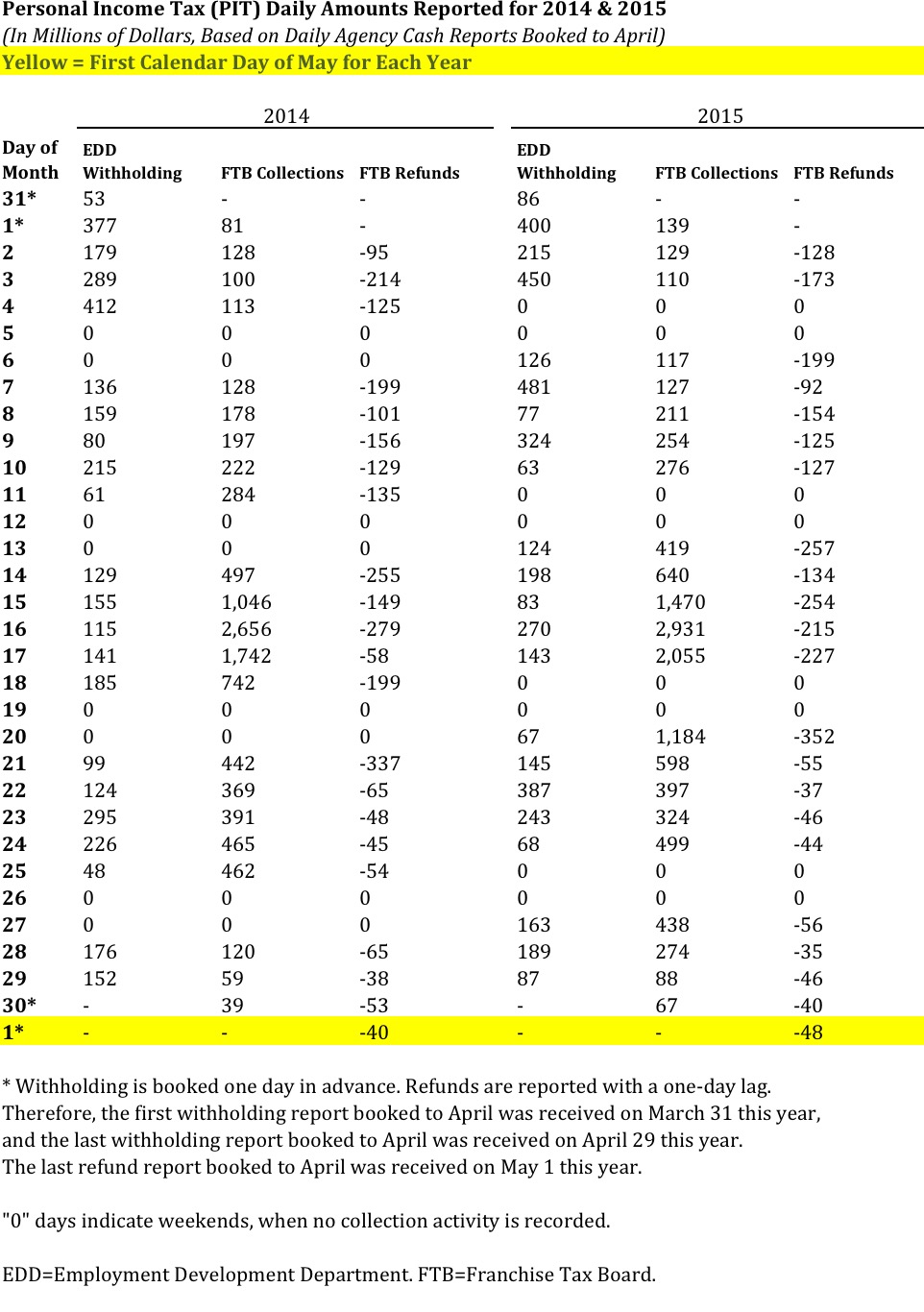