The 2017‑18 budget provides $13.1 billion from the General Fund for judicial and criminal justice programs, including support for ongoing programs and capital outlay projects, as shown in Figure 26. This is an increase of $190 million, or 1 percent, above the revised 2016‑17 General Fund spending level.

The budget provides $3.6 billion for support of the judicial branch—an increase of $23 million (less than 1 percent) from the revised 2016‑17 level. This amount includes $1.7 billion from the General Fund and $499 million from the counties, with most of the remaining balance from fine, penalty, and court fee revenues. The General Fund amount is a net decrease of $87 million, or 5 percent, from the revised 2016‑17 amount. Funding for trial court operations is the single largest component of the judicial branch budget, accounting for around four‑fifths of total spending.

Trial Court Operations. The budget provides $1.3 billion General Fund for the support of trial court operations—a decrease of $44 million (or 3 percent) from the revised 2016‑17 level, generally due to the expiration of one‑time augmentations provided in 2016‑17. This General Fund amount includes the following augmentations:

In addition, the budget includes a $46 million reduction in General Fund support for trial court operations in 2017‑18 in order to reflect the availability of property tax revenue in accordance with Control Section 15.45 and Section 2578 of the Education Code. Such funds are remitted to the state by counties that collect more property tax than state law allows them to spend on education.

Capital Outlay. The budget provides $31.3 million for various court construction projects. This amount consists of (1) $18.2 million from the Immediate and Critical Needs Account (ICNA) for design and/or construction activities for three projects, (2) $7.9 million from the Public Buildings Construction Fund for the final payments for four completed projects, and (3) $5.2 million in 2017‑18 (declining to $3.2 million in 2018‑19 and ongoing) from ICNA for the payment of debt service for the New Santa Clara Family Justice Center. (ICNA receives revenue from certain court fee and fine increases.)

The budget act provides $11.1 billion from the General Fund for support of the California Department of Corrections and Rehabilitation (CDCR). This is a net increase of $322 million, or 3 percent, above the revised 2016‑17 level of spending. This increase primarily reflects additional costs related to (1) a shift of responsibility for operating inpatient psychiatric programs in prisons from the Department of State Hospitals (DSH) to CDCR, (2) debt service payments for construction projects, and (3) one‑time roof repairs at three prisons. This additional spending is partially offset by various spending reductions, including reduced spending for contract beds due to a decline in the inmate population.

Inpatient Psychiatric Programs. In recent years, DSH provided intensive 24‑hour inpatient psychiatric care to inmates in three CDCR facilities. The budget package transfers the responsibility for providing this care, as well as $254 million from the General Fund and nearly 2,000 positions, from DSH to CDCR. In addition, the budget provides $11.4 million from the General Fund to staff 74 inpatient psychiatric program beds at the California Medical Facility in Vacaville that were recently activated by CDCR using existing resources.

Adult Correctional Population. Figure 27 shows the recent and projected changes in the inmate and parolee populations. As shown in the figure, the prison population is projected to decline slightly from about 130,000 inmates at the end of 2016‑17 to about 125,000 inmates by the end of 2017‑18. The parole population is projected to increase slightly from about 45,500 to about 48,800 parolees by the end of 2017‑18. These trends are primarily due to the estimated impact of Proposition 57 (2016), which we discuss in more detail below. 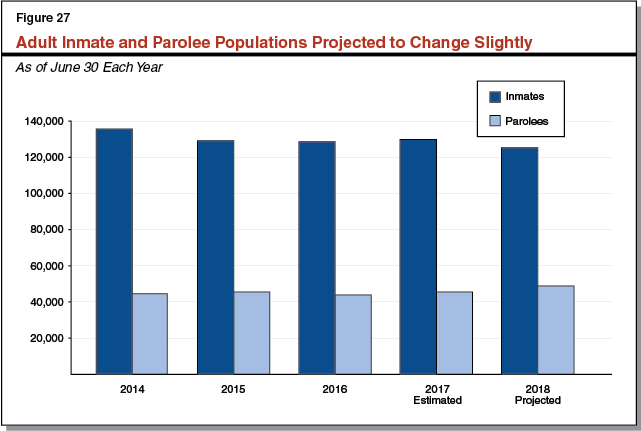 Proposition 57. Proposition 57 made all nonviolent offenders eligible for parole consideration, expanded CDCR’s authority to award sentencing credits to inmates, and requires that judges decide in all cases whether juveniles should be tried in adult court. In April 2017, the Office of Administrative Law approved emergency regulations allowing CDCR to begin the nonviolent offender parole consideration process in July 2017 and to expand sentencing credits (effective May 2017 for good conduct credits and August 2017 for credits inmates earn through rehabilitation programs). The budget includes various funding adjustments to reflect the administration’s implementation plan and its anticipated population impacts. Figure 28 summarizes these adjustments, which in total reflect a net reduction of $32.8 million.

Inmate Medical Care. The budget includes $2 billion from the General Fund for inmate medical care to comply with the federal court in the Plata v. Brown case, an increase of $46 million, or 2 percent, above the revised 2016‑17 level of spending. This includes (1) $7.8 million to provide janitorial services to new medical spaces at state prisons, (2) $7.7 million for additional medical positions needed because of an increase in patient acuity levels, (3) $7 million to implement various strategies intended to improve the department’s ability to retain physicians, (4) $6.7 million for additional nurses to distribute inmate medications, and (5) $5.4 million to implement a new health care appeals process.

Resources for Prison Enforcement Activities. The budget includes an $18 million General Fund augmentation to increase enforcement activities within state‑operated prisons. This includes $11.7 million to implement comprehensive video surveillance programs at High Desert State Prison in Susanville and Central California Women’s Facility in Chowchilla to assist in investigations into staff misconduct, violent incidents, contraband trafficking, and attempted suicides. The remaining $6.7 million is for CDCR to expand canine teams used for the detection of drugs and other contraband to all state‑operated prisons.

Other Budget Adjustments The budget includes $35 million from the General Fund to replace roofs that were damaged by severe storms at California Correctional Institution in Tehachapi, Pleasant Valley State Prison in Coalinga, and Salinas Valley State Prison in Soledad. The budget also includes a $15 million increase to convert various housing units to different missions and security levels, in order to accommodate changes in the security requirements and needs of the inmate population. In addition, the budget provides a one‑time $5 million General Fund augmentation for additional resources and equipment for career technical education programs.

Capital Outlay. The budget provides an additional $81 million from the General Fund to support various capital outlay projects in state prisons. Some of the most significant projects are to (1) renovate and upgrade medical clinic space at Calipatria State Prison ($16.1 million), (2) develop preliminary plans to construct mental health crisis bed facilities at Richard J. Donovan Correctional Facility in San Diego and the California Institution for Men in Chino ($7.3 million), and (3) construct a new potable water tank at Calipatria State Prison ($6.9 million).

Proposition 56. The budget provides a total of $45 million of Proposition 56 revenues to the department for various law enforcement activities required by the measure. This includes (1) $9 million in revenues from 2016‑17 that were deposited after the enactment of Proposition 56 in November 2016 and (2) $36 million in revenues for 2017‑18. Of the $45 million total, the budget provides $7.5 million to enforce tobacco‑related sale and distribution laws and $37.5 million to allocate to local law enforcement agencies for the support and hiring of peace officers for various activities (such as investigations intended to reduce the illegal sale of tobacco products to minors).

Legal Resources Related to Federal Actions. The budget provides two‑year limited‑term funding of $6.5 million from the General Fund and 31 positions for legal workload related to state responses to actions taken by the federal government. In addition, budget trailer legislation specifies that if federal litigation involving the California Secure Choice Retirement Savings Program arises and DOJ lacks sufficiently qualified attorneys as defined by state law, the department must contract with qualified attorneys to represent the state. The budget also provides $1 million from the General Fund for DOJ to review county, local, or private detention facilities in California that hold individuals pending their federal immigration proceedings. DOJ must complete the first review and submit a report summarizing its findings to the Legislature by March 2019. Subsequent reviews are to be conducted through July 2027.

The budget includes $157 million ($63 million from the General Fund and $94 million from other funds) for the Board of State and Community Corrections. This is a decrease of $63 million (28 percent) relative to the revised 2016‑17 level of funding, largely due to an expiration of various limited‑term grants provided in prior years.

Grants to Local Law Enforcement. The budget includes a $20 million one‑time General Fund augmentation to support a four‑year violence reduction pilot project in Orange County. In addition, the budget includes a one‑time $11 million General Fund augmentation to assist counties with a temporary increase in the population supervised by county probation departments due to the release of prison inmates as a result of Proposition 57.

New Restrictions on Local Detention Facilities. The Legislature adopted budget trailer legislation that places various restrictions and requirements on local detention facilities. For example, the legislation prohibits a facility that provided in‑person visitation as of January 1, 2017 from converting to only video visitation. The legislation also prohibits local law enforcement agencies from entering into a new contract or expanding an existing contract with the federal government to house certain individuals involved in federal immigration hearings.

State Penalty Fund (SPF). In order to address the continued decline of criminal fine and fee revenue deposited into the SPF and the expiration of one‑time offsets provided in 2016‑17, the budget package eliminates existing statutory formulas dictating how SPF revenues are distributed and instead appropriates specific dollar amounts directly to programs. As shown in Figure 29, the budget provides a total of $296 million for the support of various programs ($90.5 million from the SPF and $205.5 million from other sources) in 2017‑18—a reduction of $9.5 million from the total 2016‑17 funding level. This includes the elimination of SPF funding support for three programs as well as a one‑time $10.5 million General Fund backfill for two of these three programs.