Action on the Coordinated Care Initiative

The Coordinated Care Initiative (CCI) was a joint state‑federal demonstration project implemented beginning in 2012‑13 designed to improve the coordination of health care and long‑term services, as well as reduce the cost of providing care, for seniors and persons with disabilities. As part of the CCI, the state implemented a statewide maintenance‑of‑effort (MOE) for In‑Home Supportive Services (IHSS), thereby limiting counties’ costs for the program. Prior to CCI, counties paid 35 percent of the nonfederal share of IHSS costs. Statute gave the Department of Finance (DOF) the authority to terminate the CCI if it did not generate net General Fund savings. The administration exercised this authority in January, thereby terminating CCI and the IHSS MOE—returning counties to the original 1991 cost‑sharing ratios for IHSS. Although the administration terminated the CCI, as part of the Governor’s January budget proposal, it proposed the continuation of certain components of the CCI. In recognition of the increased cost on counties due to the termination of the IHSS MOE, the Governor’s 2017‑18 May Revision included a proposal for a new, revised county IHSS MOE.

Continuation of Major Components of the CCI

Efforts to Coordinate Care Maintained. Recognizing the merits of the policy goals behind the CCI, the Governor proposed and the Legislature approved the continuation of major components of the CCI. The 2017‑18 Budget Act continues the following CCI components:

Rather than return to the original 1991 realignment cost‑sharing ratios for IHSS, the budget package adopts the May Revision proposal to create a new MOE for counties’ share of IHSS costs. The new MOE significantly increases counties’ costs in 2017‑18 relative to 2016‑17. The budget provides ongoing state General Fund support and additional realignment revenue to partially offset this increase. The budget package also requires DOF to reexamine 1991 realignment as part of its 2019‑20 budget proposal. We discuss the specifics of the new MOE, the revenue supporting the new MOE, and other related changes below.

New MOE Uses Historical Cost‑Sharing Ratio. Counties’ new IHSS MOE for 2017‑18 is roughly $1.8 billion (compared to $1.1 billion in 2016‑17). Specifically, the new MOE roughly reflects 35 percent of the nonfederal share of estimated IHSS services costs and 30 percent of the nonfederal share of estimated administrative costs in 2017‑18. These percentages reflect the historical 1991 realignment cost‑sharing ratios for IHSS. (If 2017‑18 actual costs are lower than estimated, the new MOE will be adjusted downwards. If actual costs in 2017‑18 are higher, however, the MOE will not be adjusted upwards.) The enacting statute includes adjustments to the new MOE for the following:

Main Features of the Proposal

General Fund Support and Additional Realignment Revenues Support New MOE Costs. As seen in Figure 17, General Fund support to offset counties’ costs starts at $400 million in 2017‑18 and goes down to $150 million over several years. In addition, the budget package redirects some 1991 realignment revenues to partially cover increased county IHSS costs. As seen in Figure 18, and described in detail in the box below, under the existing 1991 realignment fiscal structure, IHSS only receives sales tax growth, while vehicle license fee (VLF) growth is provided to other realignment programs. (Other realignment programs also receive sales tax growth when available.) To increase realignment funding for IHSS, the implementing statute redirects VLF growth from other realignment programs to IHSS for five years. For the first three years, almost all VLF revenue growth is redirected to IHSS. In the last two years, half of VLF revenue growth is redirected to IHSS. 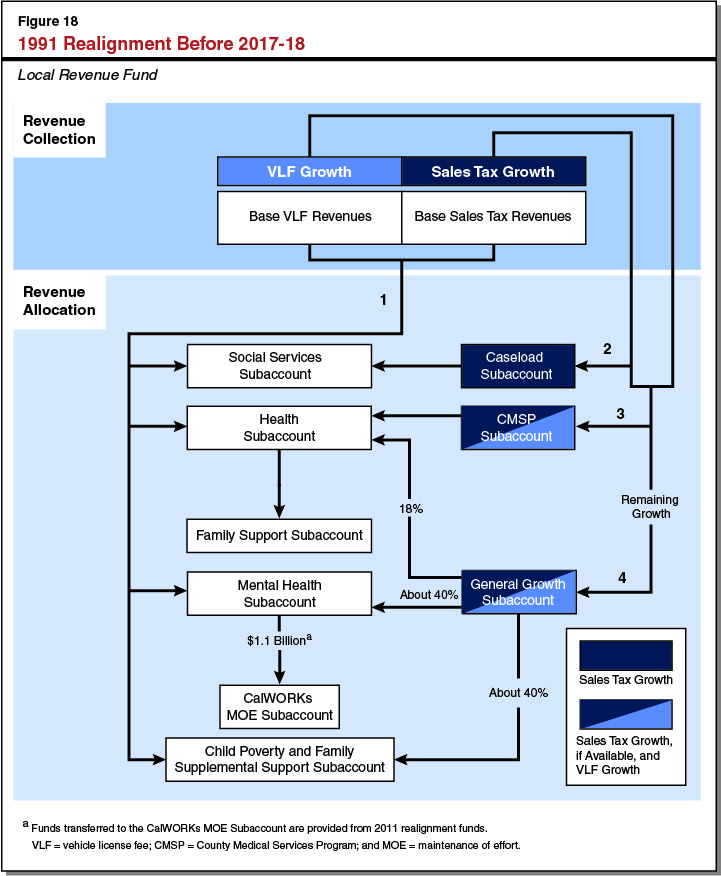 In some years, the growth in sales tax revenue is not sufficient to fully fund changes in county costs for social services programs through the Caseload and Social Services Subaccounts (Step Two). As a result, in those years, counties do not receive sufficient funding through 1991 realignment to cover the growth in costs for those programs. Those unmet county costs are carried forward to the next year and any sales tax growth first goes to pay off that balance before paying any new growth. When the cost growth in the Caseload and Social Services Subaccounts equals or exceeds the amount of sales tax growth, the Health, Mental Health, and Child Poverty Subaccounts receive growth only from VLF.

How Things Change in 2017‑18. The 2017‑18 budget package affects Steps Two, Three, and Four (described above) for five years. In particular, rather than only allocating sales tax growth to the Caseload Subaccount, In‑Home Supportive Services (IHSS) also will receive almost all of VLF growth for three years. (A small portion of VLF growth will continue to flow to the Child Poverty Subaccount.) As a result, for three years, Health and Mental Health will receive no growth funds (Steps Three and Four). After three years, half of VLF growth will be allocated to IHSS. At that time, the Mental Health and Health Subaccounts will receive some growth funds. After two years of allocating half of VLF growth to IHSS, the 1991 realignment fiscal structure would revert to its pre‑2017‑18 form. Furthermore, 2016‑17 sales tax growth for Health and Mental Health will be redirected to the Caseload Subaccount.

In addition to allocating VLF growth to the Caseload Subaccount, sales tax growth will be allocated to counties in the year in which it is received to reimburse costs incurred in that year. (As seen in Step Two above, prior to 2017‑18, sales tax growth paid prior year cost increases.) This sales tax payment acceleration will be ongoing.

Despite Additional Revenue, Counties Will Face Some Costs. While these additional sources of revenue significantly reduce the cost increase to counties due to the new MOE, the budget does not cover all of counties’ IHSS costs. Counties will need to find other revenue sources—likely their county general funds—to cover these amounts. The DOF estimates that these costs will be less than $200 million in 2017‑18 and will increase in future years.

Other 1991 Realignment Programs Will Not Receive Any Growth Funding Until 2020‑21. Due to the increased costs in IHSS and redirection of VLF growth, no realignment revenue growth will be available for some other 1991 realignment programs until 2020‑21 (the Child Poverty and Family Supplemental Support Subaccount would continue to receive some VLF growth). The revenue growth these programs received in prior years—VLF revenue growth—will be redirected temporarily to cover IHSS costs (Steps Three and Four in Figure 18). Starting in 2020‑21, VLF growth funding for these programs—Health and Mental Health—will be partially restored. Growth funding from the VLF will be fully restored in 2022‑23 and onwards. Sales tax growth, however, likely will not be provided to these programs for many years. Absent these changes, counties would have received roughly $50 million in VLF growth for Health and Mental Health in 2017‑18 (and these revenues would have grown in the out years). Due to the decreased realignment funding to these programs, counties may have to provide local general fund to support costs in these programs or make program reductions. Any additional county general fund support would be in addition to the increased county costs for IHSS described above.

Transition Phase for Counties Currently Above $12.10 in IHSS Wages and Benefits. The 2017‑18 budget package institutes a temporary, alternative cost‑sharing structure for wage increases in counties with wages and benefits currently above $12.10. For these counties, the state will share a portion of costs associated with wage increases that, in sum, do not exceed 10 percent of their current wage and benefit level. For example, if a county is currently at $13 the state will participate in wage increases up to an additional $1.30 over the next three years.

Loans to Counties Facing “Significant Financial Hardship.” In response to the increased costs to counties as a result of the new MOE, the budget‑related legislation allows DOF to provide loans to counties that demonstrate that they are experiencing significant financial hardship. The loans will be low interest (not to exceed the rate earned by the Pooled Money Investment Account) and are not to exceed $25 million statewide annually. Loans are only available through 2019‑20.

Forgiveness for Sales Tax Misallocations. Recently, DOF and others have identified issues in the Board of Equalization’s distribution of sales tax revenue. The enacting MOE statute does not require counties to repay any over‑allocation provided to 1991 realignment through 2015‑16.

Appeals to Public Employment Relations Board (PERB) Available. The 2017‑18 budget package gives counties and unions the ability to appeal to PERB and engage in mediation or a fact‑finding process if a bargaining agreement is not reached by January 1, 2018. In addition, the department shall update the Legislature on the status of all IHSS bargaining contracts by April 1, 2018. This provision is effective until January 1, 2020.

Reexamination of 1991 Realignment. The 2017‑18 budget‑related legislation requires DOF, in consultation with the California State Association of Counties and other affected parties, to reexamine 1991 realignment as part of its development of the 2019‑20 budget. Enacting statute requires DOF to report on a variety of metrics including whether the realigned revenues are sufficient to meet the costs of the programs within 1991 realignment.