The state can seek to encourage short‑term economic activity through spending increases or tax reduction programs that get people employed, increase consumer spending, and spur businesses to invest. During economic slowdowns, like the one the state currently is experiencing, interest in these types of economic stimulus programs is heightened. In this report, we offer the Legislature guidance on how to evaluate stimulus proposals.

Unlike the federal government—which can run a deficit to pay for fiscal stimulus—the state must balance fiscal stimulus with other one‑time and ongoing spending priorities.

✓ What is the source of funding?

✓ How does the proposal interact with other federal, state, and local programs?

✓ How might the expected benefits and costs be overstated or understated?

✓ Will the benefits be realized when they are needed?

Given the state’s spending constraints, economic stimulus is most likely to be effective if new programs:

✓ Complement (and do not duplicate) other federal or state programs.

✓ Can be implemented quickly.

✓ Are well designed and clearly targeted.

COVID‑19 Pandemic Severely Disrupted California’s Economy. The beginning of the coronavirus disease 2019 (COVID‑19) pandemic in early 2020 disrupted California’s economy in an unprecedented way. In the spring, the economy abruptly ground to a halt: millions of Californians lost their jobs, businesses closed, and consumers deeply curtailed spending.

Rapid Rebound Results in Incomplete, Uneven Economic Recovery. Almost as quickly, Californians began to adjust to the realities of the pandemic. With this adjustment, and accompanying major federal actions to support the economy, came a rapid rebound in economic activity over the summer and into the fall. This recovery, however, has been incomplete and remarkably uneven. In particular: 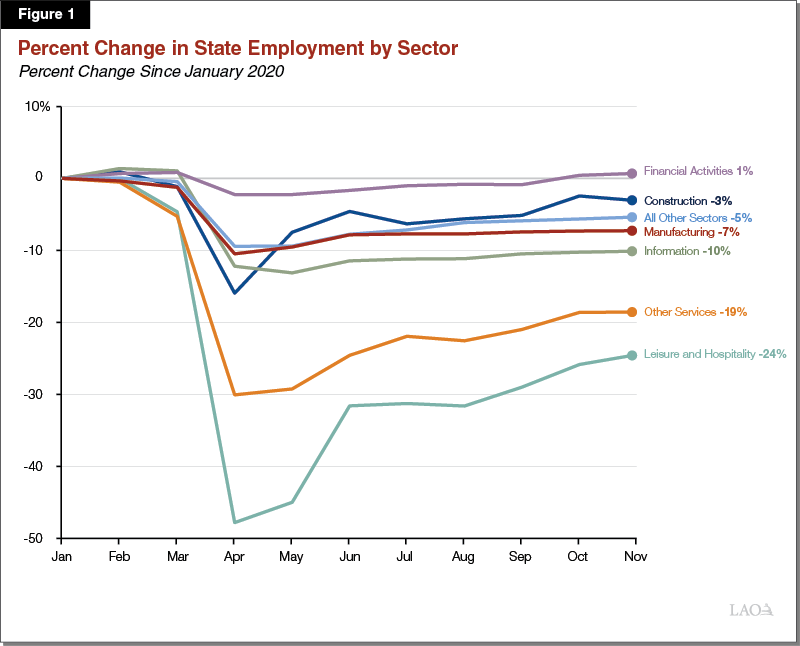 Our December 2020 Economy & Tax post, COVID‑19 and the Labor Market: Which Workers Have Been Hardest Hit by the Pandemic? describes the unequal economic and employment effects of the pandemic.

Full Economic Recovery Will Not Be Possible Until Public Health Emergency Has Been Resolved. The COVID‑19 pandemic is ongoing and, while vaccines are being distributed and administered, their widespread distribution is still some months away. Reaching a full recovery will be a slow process that will depend heavily on continued progress on management and treatment of the virus. In the meantime, the state continues to face significant economic uncertainty.

Fiscal Stimulus Can Aid Economic Recovery. State government can provide financial relief and encourage short‑term economic activity using fiscal stimulus. Fiscal stimulus consists of spending increases or tax reduction programs that get people employed, increase consumer spending, and spur businesses to invest. (Stimulus also can refer to other government actions such as regulatory changes that affect the demand for goods and services by the private sector, but this is not the focus of this report.) While these short‑term benefits can help speed the state’s economic recovery from a recession, the state also must balance fiscal stimulus with other one‑time and ongoing spending priorities. As we describe in our November 2020 report, Update on COVID‑19 Spending in California, the state has already taken some important actions to mitigate the adverse economic and health consequences of COVID‑19. The 2021‑22 Governor’s Budget also proposes several new spending and tax reduction programs that could mitigate the economic consequences of the pandemic and stimulate the state economy. These include new programs to provide fiscal relief to low‑income Californians and small businesses impacted by the pandemic, funding for infrastructure, and other new spending that could stimulate the economy. We analyze these proposals in separate publications available on our website.

Beyond the proposals in the Governor’s budget, we anticipate that the Legislature will be asked to consider the economic effects of new proposals over the coming months and years. This report provides (1) context for understanding the state’s capacity for economic stimulus; (2) guidance for assessing legislative or spending proposals based on their potential economic benefits, in addition to any other policy considerations; and (3) specific comments about economic stimulus in the context of the current economic and public health situation. In the Appendix of this report, we summarize other work our office has done in the past on evaluating the economic effects of state programs and policies.

In this section, we discuss the roles of and recent actions taken by the federal and state governments to stimulate the economy.

In this section, we first explain generally how economic stimulus can work and why it often is challenging to accurately estimate the economic benefits. We then provide a framework for assessing the merits of economic stimulus proposals.

How Does Economic Stimulus Work?

Given the challenges of quantifying economic benefits, we recommend asking six key questions, summarized in Figure 2, to make a more complete assessment of the merits of economic stimulus proposals.

What Is the Source of Funding? 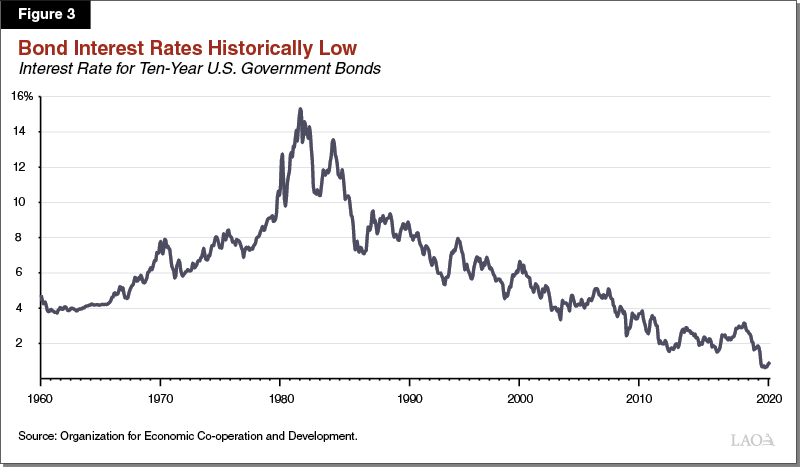 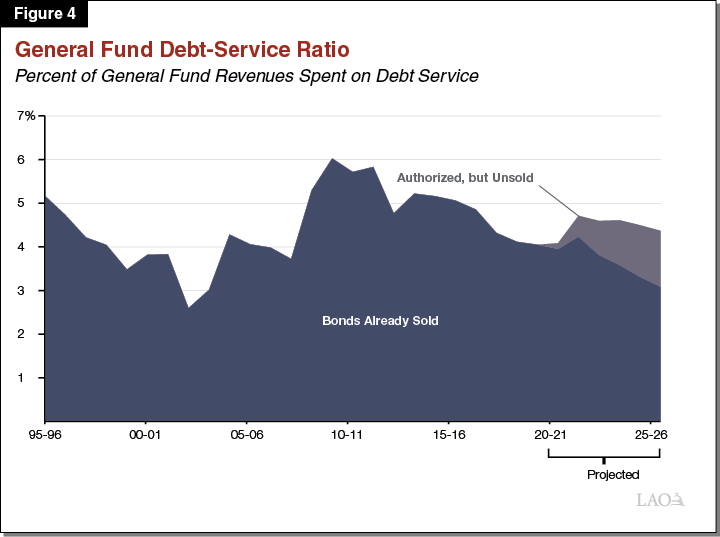 How Does the Proposal Interact With Other Federal, State, and Local Programs?

How Might the Expected Benefits and Costs Be Overstated or Understated?

The benefits and costs of new stimulus programs may be less than or greater than expected if the initial assumptions turn out to have been inaccurate. The actual economic benefits and costs of stimulus programs depend in part on factors that are uncertain, such as future labor market conditions and behavioral responses by affected businesses. Asking the following questions can help Legislators assess whether the estimated economic and fiscal effects presented to them are reasonable.

Will the Benefits Be Realized When They Are Needed?

Considerations Specific to the COVID‑19 Pandemic

In our recent report, The 2021‑22 Budget: California’s Fiscal Outlook, we forecast that the state will begin the 2021‑22 fiscal year with a one‑time surplus of about $26 billion. This large revenue windfall provides the Legislature with an opportunity to mitigate the adverse economic and health consequences of the public health emergency. As part of this overall response, the Legislature also may consider using a portion of these funds for one‑time fiscal stimulus. In addition to the general guidance above, we suggest the Legislature consider several additional unique factors related to the COVID‑19 pandemic.

Prior Evaluations of the Economic Effects of State Programs

The Legislature occasionally asks our office to evaluate the economic and fiscal effects of state programs and policies. Our research has raised issues for legislative consideration about the potential effectiveness of the state programs that we reviewed. In addition, we have endeavored to increase awareness about the challenges and limitations of such analyses. We highlight three recent studies below.

Film and Television Production Tax Incentives. We evaluated the economic effects of an income tax credit for motion picture production in 2016 at the request of the legislature. In this report, we estimated that about one‑third of the film and television projects that received a tax credit under this program would probably have been made in California anyway. We found that the $800 million program may have increased the state’s economic output by between $6 billion and $10 billion over ten years. Our report also highlighted key areas of uncertainty and additional factors the legislature should consider beyond the bottom line economic results of the analysis—such as opportunity costs and the policy objective of the program which was to strategically counter aggressive film tax credits offered by other states. This report is available online.

Sales Tax Exemption for Certain Manufacturers. In 2018, we evaluated the economic effects of a sales tax exemption administered by the California Alternative Energy and Advanced Transportation Financing Authority. This exemption is available for equipment used for certain manufacturing activities such as aerospace, electric vehicles, and alternative energy equipment. In this report, we concluded that the exemption likely has some positive economic effects on the targeted industries in California. Whether the program had positive or negative net effects on the state’s economy as a whole was unclear, however. This report, which is available online, includes an appendix that discusses the economic effects of the program in detail and explains why the estimates of these effects are highly uncertain.

State Policies to Reduce Greenhouse Gas (GHG) Emissions. Pursuant to a statutory requirement, our office reports annually to the Legislature on the economic effects of the state’s statutory GHG emission goals. Our 2018 report, Assessing California’s Climate Policies: An Overview, provides a conceptual overview of the potential economic effects of state GHG reduction policies and explains key economic concepts and the challenges in estimating the overall effects of the policies.